In a groundbreaking study published in the journal Analytical and Bioanalytical Chemistry last year, evidence surfaced that glyphosate, the active ingredient in the Monsanto's patented herbicide Roundup, is flowing freely into the groundwater in areas where it is being applied.1 The researchers found that 41% of the 140 groundwater samples taken from Catalonia Spain, had levels beyond the limit of quantification – indicating that, despite the manufacturer's claims, glyphosate herbicide does not break down rapidly in the environment, and is accumulating there in concerning quantities.

Why Is Groundwater Contamination An Important Finding?

Groundwater is water located beneath the ground surface, that supplies aquifers, wells and springs.  If a chemical like glyphosate is mobile enough to get into the groundwater and is intrinsically resistant to being biodegraded (after all, it is being used to kill/degrade living things – not the other way around), significant environmental exposures to humans using the water are inevitable. After all, according to the USGS, 88,000 tons were used in the US in 2007 alone.

Keep in mind that glyphosate is considered by the EPA as a Class III toxic substance, fatal to an adult at 30 grams, and has been linked to over 20 adverse health effects in the peer-reviewed, biomedical literature.

This groundwater contamination study adds to another highly concerning finding from March, 2011, published in the journal Environmental Toxicology and Chemistry, where researchers found the chemical in 60-100% of all air and rain samples tested, indicating that glyphosate pollution and exposure is now omnipresent in the US. When simply breathing makes you susceptible to glyphosate exposure, we know we are dealing with a problem of unprecedented scale.

In fact, glyphosate's broad spectrum toxicity has been identified to be one potential cause for the disturbing loss of indispensable food-starter bacteria from soils and cultured foods within certain regions of the world, indicating that GMO farming may be depleting the microbial biodiversity of the soil, and ultimately its ability to remain fertile.

Who Is Responsible For The Groundwater Contamination?

Monsanto is a multinational agricultural biotechnology corporation, presently dominating the global genetically engineered seed market, with 90% market share in the US alone. It is also the world's largest producer of the herbicide glyphosate, marketed as "Roundup," among other brand names.  If you are eating corn and soy, or any of their ten thousand plus byproducts – and it does not have a USDA organic logo – you are getting the Monsanto "double whammy": the genetic modification (GM) of your health (and gene expression) that follows the consumption of GM food (because we are – literally – what we eat), and ceaseless chemical exposure to glyphosate, as all Monsanto-engineered foods have been designed to be glyphosate-resistant, and therefore are saturated with it. 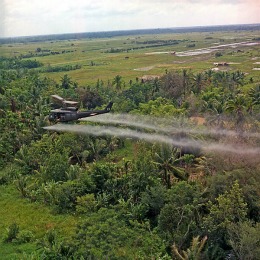 Roundup is not Monsanto's first entry into the systemic herbicide market. Monsanto admits it manufactured the herbicide/defoliant Agent Orange from 1965 to 1969, which Vietnam estimated killed and maimed 400,000 people and resulted in the 500,000 children being born with birth defects.

The true devastation caused by Agent Orange was covered up for many years. We may find that Monsanto's Roundup, and its primary active ingredient glyphosate, may be causing a similar degree of devastation to both environmental and human health under the lidless, though not very watchful eye (as far as business interests are concerned), of our regulatory agencies.

But what is most disturbing, and which may make its comparison to Agent Orange all the more appropriate, is its potential teratrogenicity, i.e. ability to cause fetal malformations.

A 2003 study of pregnant, glyphosate/Roundup-exposed rats indicated the formulation exhibited significant tetragenicity. The researchers commented: "We may conclude that glyphosate-Roundup is toxic to the dams and induces developmental retardation of the fetal skeleton."2

A study published in 2004 revealed that glyphosate exhibits endocrine-disruptive and embryotoxic effects. Researchers found the chemical alters the expression of the enzyme aromatase in both fetal and placental cells and tissue -- changes which indicate it may contribute to birth defects and abnormal fetal development.3

Another study published in 2009 showed that glyphosate formulations induce cell death and necrosis in human umbilicial, embryonic and placental cells.4

Now that glyphosate has been found in the majority of air and rain samples tested in the US, and is now likely contaminating our wells, springs and aquifers, exposure is not only likely, its inevitable -- the difference being only a matter of degree.

The precautionary principle, which is not employed here in the US, would require that if a company produces a novel chemical compound like glyphosate, and would like to use it commercially, it would have to prove its safety to humans before it is released into the environment.

Animal and cell research clearly shows glyphosate is harmful, but because we use a "weight of evidence standard" in this country, the burden of proof that it is harmful to humans is on those being exposed to it.

Had Monsanto been required to prove its safety in humans, it is doubtful they would have been able to. There was already enough damning animal research available, and proving a toxic chemical in human studies would require harming them, which is unethical.

This is why the precautionary principle is so powerful and necessary to protect us from corporations like Monsanto. We would not be eating, drinking and breathing glyphosate today, if it had been employed earlier. Instead, chemical companies use animal experiments to determine a LD50 (the dose at which 50% of the animals die), from which an "acceptable level of harm" is extrapolated and applied to humans, in what is called a toxicological risk assessment.

An acceptable level of harm? This way of thinking is abusive, especially when applied to the unborn and infants.

Will it take additional decades of cumulative "acceptable" exposures, and thousands of "mysterious" miscarriages, birth defects, and developmental problems for us to understand how serious the problem is? Or, should we listen to Monsanto, their scientists, and the governmental regulatory agencies that they populate with elected and unelected officials on their payroll, who say it is relatively harmless?

Learn about the California ballot initiative that will force GMO foods to be labeled. This is the front line of the struggle against the continued assault on human and environmental health by corporations like Monsanto.