Going Against the Grain Towards Better Health 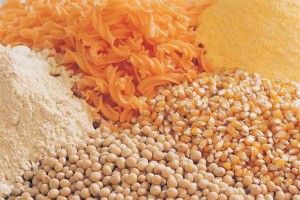 Grains are often called the "staff of life," having a sort of credibility that is biblical in proportion. So prevalent is the perception that grains make for "good food" that the Food and Agriculture Organization (FAO) - which is the United Nation's international agency for defeating hunger - uses a head of wheat as its emblem, with the Latin Fiat Panis or "Let There Be Bread" as its motto

Despite the rather lofty secular position a loaf of whole grain bread may hold in the international community, the biblical record actually shows that the first foods mentioned in the Bible were the Herbs and Fruit Trees (Genesis 1:29) and that by punishment for sin God gave man bread:

...cursed is the ground for thy sake;...In the sweat of thy face shalt though eat bread, till though return unto the ground...

The inherent wisdom of this biblical message has long been forgotten and today, according to the USDA MyPlate, grains should constitute a sizeable sector of our diet in the form of "bread, cereal, rice, and pasta." Many of us, whose hyper-agrarian taste buds and gastrointestinal tracts have never once gone a day without some grain-derived morsel of bread or cracker, find ourselves expressing our dependency on these foods in telling, half confessionary phrases like: "I'm starving for a piece of bread," or "that pizza is to die for," forgetting that among non-agrarian peoples, grains were universally considered a last resort, or, starvation food only.

In an agrarian society such as our own, we should expect our government to recommend the consumption of grains and our contemporaries to consume grains in plenty. After all, we are no longer hunting and gathering our food. Cereal grasses, in fact, are at the substrate of nearly all modern food production, from the bread we bake, to the milk we drink, to the meat we eat.** With 10% corn ethanol gasoline now a federal mandate, even our vehicles are forced to quench their thirst at the table of the almighty grain.

And yet despite all of this, economic pressures and cultural preferences can not negate the fact that our bodies did not evolve on a grain-based diet. Grain consumption en masse began only 1-500 generations (20-10,000 years)* ago, depending on how far from the bread basket of civilization (i.e. the Fertile Crescent) one's ancestors happened to have wandered, or how fortunate they were in fending off invading agrarian societies, such as the Romans. The Roman empire's moniker, the "Wheat Empire," was earned in part by the fact that that Roman forts were actually granaries, designed to hold a year supply of wheat in case of siege.

Still today, Irish, Scottish and Finnish people have some of the world's highest levels of celiac disease. Their resilient ancestors managed - for the most part - to fend off the Roman invaders which, at the same time, prevented them from adapting adequately to the radically different foreign fare of a grain based diet. (Learn more in our article The Dark Side of Wheat)

Historical examples like these provide an interesting window to peer through, but we must look to prehistory, as inscribed so perfectly into the very flesh and bone of the human frame and even further down to our very DNA, if we are to perceive with any clarity how alien cereal grass seeds are to our human metabolism.

The most obvious physiological representation of this fact is that we are monogastric mammals, and therefore are not equipped with the multitude of forestomachs found in the ruminant animals which enable them to break down these difficult to digest grasses. Even the ruminants have great difficulty with the "seed" form of the grasses, developing metabolic acidosis, infections and other "diseases of affluence" not dissimilar to those that afflict humans who consume grains heavily, especially when fed wheat.

Seeds, after all, are the "babies" of these plants, and are invested with not only the entire hope for propogations of its species, but a vast armory of anti-nutrients to help it accomplish this task: toxic lectins, phytates and oxalates, alpha-amalyase and trypsin inhibitors, and endocrine disrupters. These unappetizing phytochemicals enable plants to resist predation of their seeds, or at least prevent them from "going down without a fight." (Learn about the ultimate "invisible thorn" in wheat seeds)

We are monogastric mammals for a reason. Our gastrointestinal tracts have been intelligently constructed via millions of years of adaptation to environmental determinants, with diet first in order of importance. It is no longer a mystery why we are built the way we are. In fact decades of research in biology, evolution, anthropology and genetics have now brought to light the formative forces behind our present day metabolism and physiology.

We Are What We Once Ate Long Ago

A growing body of research has emerged which focuses on the relationship between agrarian or grain-based diets and diseases of affluence, and how increased susceptibility for obesity, cardiovascular disease and diabetes in agrarian societies can be linked to the absence of genetic adaptations to the consumption of grains in our species as a whole.

These genetic aberrations can be further broken down, to varying degrees of intensity, in demographically distinct human populations who have had between 1 and 500 generations of biological time to adjust to their consumption. The greater the distance in space and time a human subgroup has spent from grain consumption, the less likely that group will have the genes necessary to handle the metabolism of grains effectively.

That we did not evolve eating cereal grasses was made perfectly clear in the published thesis: "Agrarian diet and disease of affluence - Do evolutionary novel dietary lectins cause leptin resistance?" where a group of European scientists** point out that:

The grasses emerged between 65 and 55 million years ago. And since the last common ancestor of the humans emerged before this time, some 90 to 65 million years ago, it cannot have had a diet consisting of seeds from grass. Subsequent evolution of our primate ancestors up until 4-8 million years ago is thought to have taken place in the trees, where almost all potential plant food comes from dicotyledonous species and the monocotyledonous grasses are absent.

At some point 4-8 million years ago our arboreal ancestors descended from their trees taking up a radically different livelihood as ground level foragers, and later as nomadic hunters and gatherers.

The advent of Homo Sapiens 200,000 years ago saw animal foods become increasingly important. As our ancestors moved away from equatorial zones, where vegetarian sources of food were available year round, carnivorous behavior sustained our migrations to less hospitable latitudes.

Carbon isotopic signature analysis of hominin remains from the Upper Paleolithic (28-29K years ago) reveal that these ancient hunters and gatherers were consuming animal protein year-round at a higher trophic level than the arctic fox.**

This is not surprising information, considering that thorough analyses of the data gleaned from the world's historically studied hunters and gatherers show that 73% of them obtained 50% or more of their subsistence from hunted and fished animal foods.**

Perhaps the strongest case can be made for a grain free diet by looking a certain genetic defects all humans share in their genotype.

2. Humans are incapable of deactivating the leptin-blocking lectin found in grains, which makes them prone to obesity. The exact gene sequence that deactivates this lectin is found in genetically diverse species such as rodents and birds; a homology, no doubt, which exists because both species have had many thousands of years more time than humans to adjust to grain consumption.

1. Scientists have identified an incomplete Angiotensin Converting Enzyme gene, and an incomplete alipoprotein B gene in groups of humans who have very high rates of cardiovascular disease, and have had little time to adapt to an agrarian diet.

2. Celiac disease afflicts, in greatest number, exactly those human populations that have had the greatest separation in time and space from the agrarian modality. (Learn how 30% of the world's population has the "celiac gene").

The story of our intolerance to grains is complex, and involves too many factors to address in this short article. We will briefly list the most dominant problems, which we hope to cover in future analyses:

4. DNA sequences in grains, e.g. gliadin in wheat, exhibit similar, if not identical patterns with certain pathogens and human tissue, e.g. pertactin (the immunodominant sequence form pertussis - the pathogen that causes whooping cough) shares the same sequence as the wheat protein known as gliadin. This 'molecular mimicry' can cause autoimmune reactions and disease.

6. Grains once processed and cooked have high glycemic ratings, causing the endocrine roller coaster that can lead to both forms of diabetes.

7. 70% of the industrial world's grain production goes to feeding livestock, poultry and fish.

*It is possible that these estimations need to be revised to 30,000 years ago. Read "Bread was Around 30,000 Years Ago" To Learn More.