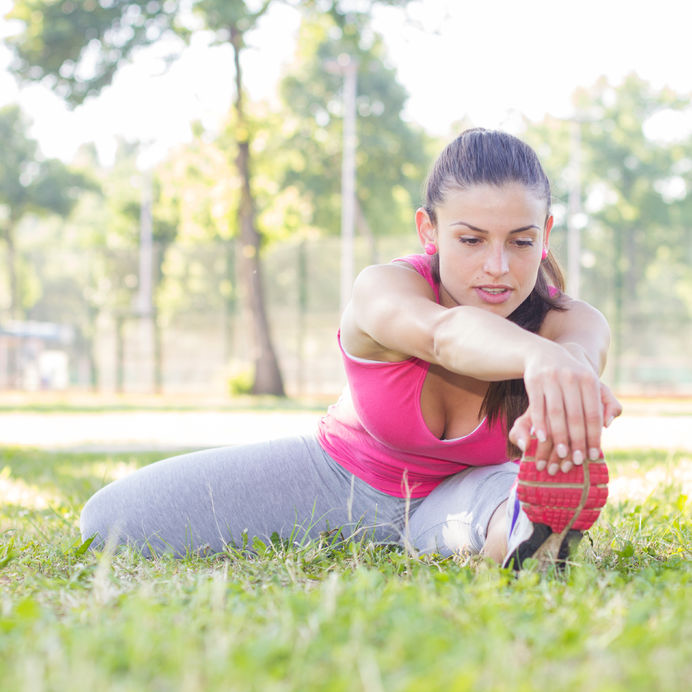 Exercising in the great outdoors causes an increase in self-esteem, a better mood, and reduction of blood pressure and anxiety. However, you can still get the benefits of an open air workout when you're stuck inside

You already know that getting to the gym or doing some physical activity can bring a long list of health benefits. It's linked to better moods, less stress and anxiety, improved self-esteem, better sleep, and just feeling better overall.

Likewise, having access to green space has been shown to improve longevity, heart health, general health, mental health, sleep patterns, and recovery from illness.[i] Just coming into contact with the earth's surface in a practice called grounding or earthing triggers beneficial physiologic changes in the body. And exposure to sunshine kills pain, burns fat, and boosts energy among many other amazing benefits.

If you're lucky enough to enjoy physical exercise in the great outdoors, you multiply the benefits of your workout. It's called "green exercise."

But a new British study from the University of Essex shows that you don't actually have to go outside at all to get the added benefits of green exercise. Just looking out a window or at some outdoor scenes can significantly boost the health benefits of your workout.[ii]

The researchers divided 100 adults between the ages of 18 and 60 into five groups. All of the participants were asked to run on an indoor treadmill in front of a screen for 20 minutes. On the screens the researchers projected four types of images during the exercise session.

The researchers measured blood pressure, heart rate, mood, and self-esteem of the participants before and after exercise.

Exercise alone significantly reduced blood pressure, increased self-esteem, and had a positive significant effect on mood measures. But the images clearly affected the degree of improvement.

In fact, the urban scenes - both pleasant and unpleasant - increased blood pressure compared to the controls.

Self-Esteem. All five groups had significantly improved self-esteem but the control group had more improvement than the two unpleasant (urban and rural) scenes. In other words, exercising in an unpleasant situation put a damper on self-esteem improvement.

Both pleasant images, however, produced the greatest increases in self-esteem.

Mood. Although exercise alone improved measures of mood, looking at unpleasant rural scenes had the most dramatic effect in depressing those benefits of exercise.

The researchers believe their results show the synergistic effects of combining exercise with pleasant rural and urban environments. They suggest that exercising in a pleasant environment has a greater effect than exercise alone on blood pressure, cardiovascular health, self-esteem, and mood.

It's an important point because we are become more and more of an urban planet. It's estimated that within the next decade, the number of people living in urban areas will exceed those living in rural areas.

But even if you can't get outside in the fresh air and sunshine, you can still get some of the health benefits of green exercise. Even simply the presence of plants, gardening or a walk in the forest have been proven clinically to have compelling health benefits. Try designing an indoor environment that includes images of the outdoors or windows looking out into nature. Set up a slideshow on your computer screen or iPad displaying spectacular scenes of the great outdoors. Or bring some nature into your exercise area in the form of flowers or plants.

For more about the wide range of proven therapeutic effects of Exercise visit the GreenMedInfo database on exercise. 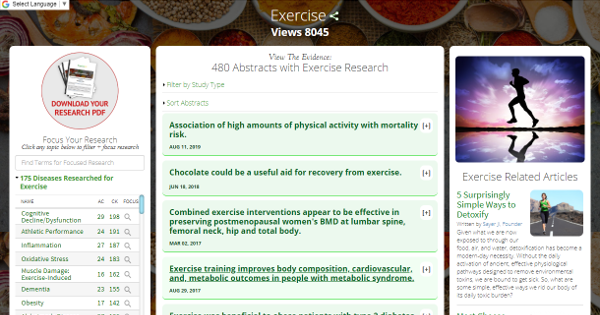 Exercise
Shinrin-yoku (taking in the atmosphere of the forest)
The Presence of Plants
Exercise: Aerobic
Exercise: Green