The Growing Problem of Our Plastic Contaminated Oceans

Views 274
Posted on:
Thursday, February 8th 2018 at 9:15 am
Written By:
GreenMedInfo Research Group
This article is copyrighted by GreenMedInfo LLC, 2018
Visit our Re-post guidelines

Scientists are issuing urgent pleas to stem the alarming tide of plastic contamination in our oceans. The problem of floating plastic debris has become so vast, it presents a real and present danger to sea life, including some of our most endangered ocean mammals

The damage being afflicted upon the Earth’s oceans and waterways continues to grow in severity. From oil spills, agricultural runoff, to the glut of man-made litter that accumulates in toxic debris pools, we may be reaching critical mass for the toxic burden that the planet can endure. Images of manmade debris floating in mile-wide clusters leave nothing to the imagination. We have a serious pollution problem in our oceans. 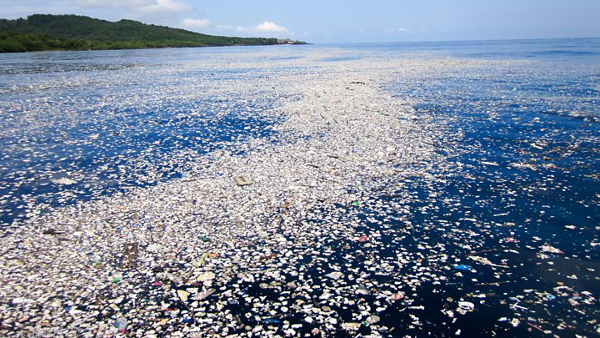 A giant build-up of plastic was captured by underwater photographer Caroline Power.

Many alarm-sounding studies have been released in recent years, calling for more to be done about the problem. In February 2018, researchers from the United States, Australia and Italy issued a plea to increase research into microplastic pollution and its effect on sea animals. Their meta-analysis, published in the journal Trends in Ecology and Evolution, explains that sea creatures may be swallowing hundreds of bits of plastic each day. The indigestible plastic interferes with nutrient-uptake, can damage the digestive system, and has the potential to interfere with critical biological processes such as development and reproduction. The danger this problem presents to these already at-risk species is still largely unknown.

Animals called “large filter feeders,” are considered highly at-risk. These species feed on smaller fish and plankton, taking in small particles through specialized openings that trap food. Filter feeders clarify water and are considered beneficial to an ecosystem. You will find filter-feeding species among birds, fish, mollusks, crustaceans, sponges, corals, and sea mammals. Feeding on particulate suspended in the water, these animals are unable to separate food from floating plastic. Researchers state that the microplastic pollution problem has the potential to further reduce population sizes of these sensitive species, many of which are endangered, yet there is little research being done on these risks.

Microplastic is any piece of plastic that is under five millimeters in length, presenting a danger to both large and small filter feeder species. Based on meta-analysis of existing research, geographical areas of highest concern are the Gulf of Mexico, Bay of Bengal, Coral Triangle, and the Mediterranean Sea. Researchers have already found microplastic absorption among whale shark and fin whale populations,[1] and want to determine the extent of damage this will have on reproduction, metabolism, and development over the life-cycle of these animals. 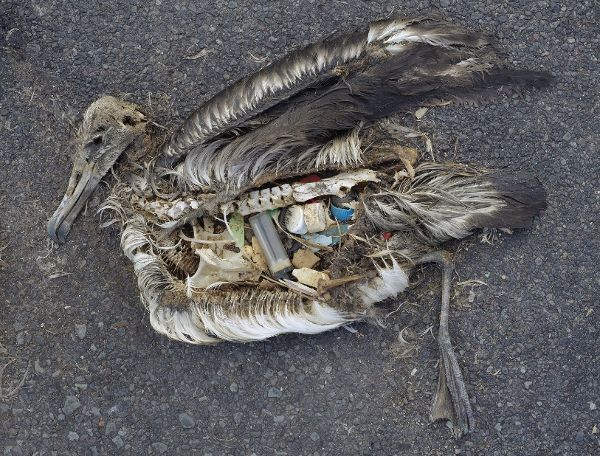 Image of albatross from Midway Atoll Refuge, with stomach full of plastics.

Another international researcher team published a report in the November 2017 issue of Environmental Science & Technology that focused on a region in the North Pacific known as the “Great Pacific Garbage Patch.” The North Pacific Subtropical Gyre is an area where marine debris and chemical sludge collects in stagnant pools, trapped by the currents. This illustration, produced by the National Oceanic and Atmospheric Administration (NOAA), shows the convergence zone where all particulate, even microscopic bits, conglomerate. 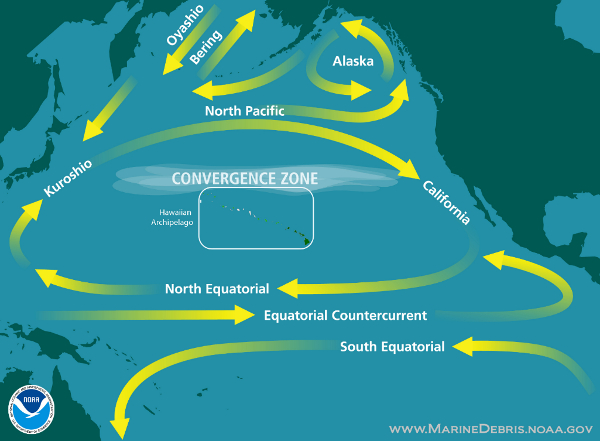 The report, entitled “Pollutants in Plastics within the North Pacific Subtropical Gyre,” examined the specific types of plastics found in the garbage patch, including chemical composition. Researchers assessed the potential risks posed to the environment via sediment quality tests, and discussed the implications of their findings for the future of the region and its wildlife inhabitants.

Plastics sampled from debris included soft plastics, such as marine nets and ropes, and hard plastics, like those used in boating and fishing equipment. As this debris breaks down in the sun and water, it fragments into progressively smaller pieces, becoming fodder for more and smaller types of marine animals. This decomposition releases the toxic compounds from plastics into the environment and bodies of predators. Nearly 30% of hard plastic samples were found to contain high concentrations of PBDEs, polybrominated diphenyl ethers, flame-retardant mixtures that are highly toxic to humans and the environment. These chemicals are bioaccumulating, creating an ever-increasing problem as more and more plastics find their way into the sea. Even current levels pose significant risk: 84% of samples collected had at least one PBT−Persistent Bioaccumulating Toxic chemical−that exceeded effect levels for safety. The higher the concentrations of these chemicals, the less equilibrium is found in the environment.

Sediment quality tests were equally disturbing. Surface trawls collected a shocking 180 times more plastic than biomass on average, reflecting the inevitability of marine life consuming plastic as they move through polluted areas. Researchers believe that filter-feeding species “may have plastic as a major component of their diets.” There is an urgent need to understand the implications of transfer of these toxic chemicals from plastics into marine environments and inhabiting predator species. Currently, there is no risk assessment available. There is some data on the devastating effects of plastic-ingestion among animals that feed on surface waters of the North Pacific region. Captured loggerhead turtles were found to have 74% plastic in their digestive system, while Laysan albatross chicks were observed being fed boluses (small, round food mass) comprised of 45% plastic.

The report[2] posits that the North Pacific waters may have more problems than their field samples definitively revealed. While this study focused on microplastics, larger plastic particles are also in the garbage patch. Researchers speculate that a toxic flame retardant known as HBCD is likely to be found in higher concentrations due to its use in foams that are frequently observed floating in the region.

There are five gyres in the world, all with their own floating “garbage patch.” Sea life is being affected on a global scale, and we are only beginning to open our eyes to the potentially devastating long-term effects. The health of our oceans is everyone’s responsibility. Take immediate action by minimizing your use of plastics, and transporting all plastic waste to a recycling facility. The problems of our world are bigger than any one person, but each one of us has the power to make a positive impact.