Has Snopes Been Snoped? Will Retraction Watch Retract? 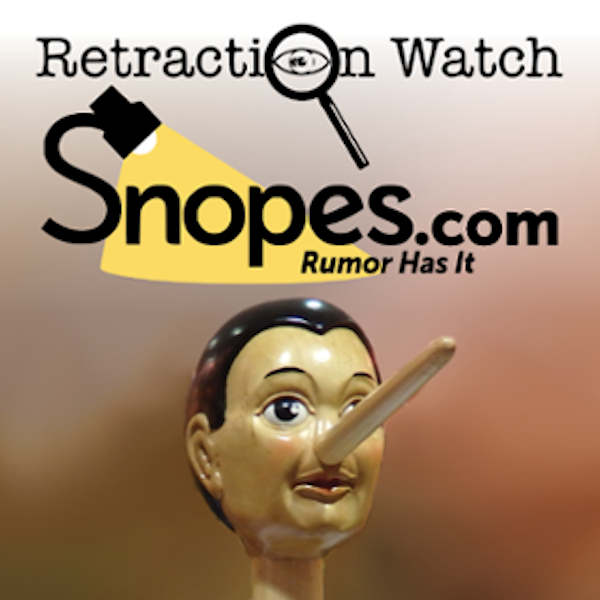 The NEVER-retracted vaccinated vs. unvaccinated study that revealed significantly higher odds in risks of chronic illness among vaccinated children is back online. But will Retraction Watch admit it launched the attack to discredit it? Will Snopes fact-check itself? If not, why not?

The first-ever study of vaccinated vs. unvaccinated American children (and a subset study) published two weeks ago in the peer-reviewed Journal of Translational Science have reappeared online after briefly disappearing while under fire from a small band of Skeptics and the staff at Retraction Watch, an organization that reports Science retraction news. Snopes, the fact-checking website, is still misreporting that the study has been retracted, even while it sits, published, in the science journal’s pages.

It is a troubling saga unfolding in the scientific publishing world, and it is worth paying attention to because it’s revealing of powerful forces in that realm that are trying to censor scientific research and to shield important data from public viewing. Not at all the methodical and logical sort of thing you would expect from modern scientific types.  It looks more like a secret 17th century Salem witch trial…interrupted.

Most readers here will be aware of Anthony Mawson et al.'s pivotal pilot study on the health of homeschooled American children. It is one of very few studies to examine the explosion of once rare disorders and conditions affecting modern children (all the millions of 21st century First World earaches, allergies, hayfever, ADD, neurodevelopmental disorders and autism, that is damaging young children’s brains in spiking numbers). And it is the only study (yes, the ONLY study to contain totally unvaccinated American subjects.) There are no other studies of American children who have never had a vaccine compared to kids with the motherload of CDC protection.

The researchers cautiously asked a logical, but unorthodox question: is it possible that all this immune –mediated disease has anything to do with the immune-mediating drugs that children are given in doses five times that of their parents?   (And yes, autism is brain damage but it is almost certainly the result of a damaged immune system). Could it have anything to do with the 50 doses of 15 immune-stimulating vaccines before age six compared to the three doses of three vaccines the last generation -- that wasn’t so sick -- got?

The researchers got some very troubling answers. They reported Odds Risk ratios similar to smoking and lung cancer for vaccination and immune-mediated allergic rhinitis, for example.  And a more than four-fold higher risk of vaccinated children having been diagnosed on the Autism Spectrum than unvaccinated children. We better have another study, the researchers concluded. A bigger and better study.

Round One: Suppressing the Study Results

Enter the Skeptics. When the Mawson paper was under review at Frontiers last year, a Skeptic named Leonid Schneider leapt into action.

“I pride myself to have caused the Frontiers anti-vaxx retraction with one tweet!” he tweeted. “The anti-vaxx paper was published as abstract, a reader alerted me, I tweeted, Frontiers got scared, pulled the paper.” Before it was published. It was never published. NEVER RETRACTED. Just tweeted away by Leonid and his Skeptic friends.

Most scientists are skeptical -- they don’t like claims without evidence – but not all scientists are Skeptics. Skeptics are champions of objective scientific inquiry who fight against anything they see as irrational and unscientific, which is everything outside of pharmaceutical manufacturing interests. Functional Medicine is equal to Bigfoot to them.  They know the difference between Good Thinking and Bad Thinking and some theories (like evolution) they think are very good and some ideas, like God, are particularly bad. They don’t like religion, but Skeptics can be quite dogmatic themselves about some things. Like vaccines. According to them, all vaccines are safe and effective. No one is ever injured by vaccines. Every child is healthier because of vaccines. The epidemic of childhood disorders is caused by something that is not vaccines. Questioning vaccines is heresy.

Retraction Watch, which bills itself as "a window into the scientific process," got a little more involved than window-watching and inaccurately reported that the study was retracted, based on a Tweet. It ignored that accepting science on its merits, and then rejecting it on Tweets from those who disagree, is in violation of the publishing code of conduct.  Not to mention that there is a big difference in the world of science between having a paper retracted – which implies scientific misconduct or gross scientific error – and having a paper declined because of disgruntled Tweets.

Frontiers publicly posts their retraction policy and affirms that they abide by the Committee on Publication Ethics (COPE) guidelines and recommendations in cases of potential retraction. Frontiers also abides by two other key principles, as recommended by COPE:

There was no retraction statement ever made or posted by Frontiers; therefore Retraction Watch's statement about Dr. Mawson’s paper being retracted is inarguably false. This proven lie was used to interfere with and misconstrue Dr. Mawson’s research, resulting in a temporary removal of his article from The Journal of Translational Science pending an inquiry. Inquiry resolved, the articles have been reinstated on the journal’s website, demonstrating sufficient proof that the articles were never retracted as claimed by Retraction Watch.

Round Two: Discrediting the Study Results

Retraction Watch was again the first to misreport the retraction of the Mawson paper from the Journal of Translational Science last week. Rather than reporting on the facts, Retraction Watch took an activist role in the attempted takedown of Dr. Mawson’s research. Misconstruing and misrepresenting another scientist’s research is considered scientific misconduct. Retraction Watch still has (at the time of writing) an article posted that claims the paper has been doubly retracted. Their actions have a ripple effect, furthering the harm to Dr. Mawson and his younger colleagues, actions which are harmful to reputations, careers, and their future livelihoods. Snopes, the “fact-checking” entity, was still reporting that the papers were retracted because of methodological flaws, with only a tiny disclaimer at the bottom showing the papers restored to the Journal’s webpages. I pointed out the error to the editors and they updated the story today, without apology for inaccuracies.

Continuing to retain articles that are demonstrably and provably false on their website shows a lack of regard for the integrity and truth they espouse to protect. The public should be aware that their representations are not well researched and supported by the facts, and that the due diligence they claim to conduct in the interest of scientific integrity is not as it appears once you scratch the surface.

No answers have been forthcoming from Retraction Watch's editor Alison Cook. She has not replied to my inquiries. Snopes founder David Mikkelson and managing editor Brooke Binkowski did not reply to messages. I did not receive explanations from the journal editors either.

The Digital Media Law Project publishes guidelines for publishing information that “harms the reputation of another person, group, or organization.” Injury to one’s reputation that stems from a falsehood is defamation, and claiming an article was retracted when it wasn’t is false, defamatory and should be corrected when notice and evidence has been provided to the author of the defamatory article. In the case of the Snopes article, the DMLP states “the republication of someone else's words can itself be defamatory. In other words, you won't be immune simply because you are quoting another person making the defamatory statement, even if you properly attribute the statement to its source.”

The DMLP also advises publications to "be prompt and give your correction the same prominent position that you gave the inaccurate information you previously posted.”

Can Snopes and Retraction Watch be Trusted?

The whole ordeal puts scientific publishing into a bad light. Can it be so easy to push editors out of publishing? Is the code of conduct meaningless? Don't the researchers have recourse to defend their work if there are allegations against it, in a scholarly manner? Has science stooped so low, so beneath accepted standards of professionalism, that it is time to call in lawyers?

This disturbing event leaves the public bewildered. Is there something to worry about for our children's health or not? Why did these researchers find such a high risk of autism and other disorders in vaccinated children?  What are the possible mechanisms of immune system injury from vaccination in children?

The way the Mawson study was received undermines public trust in a system that is meant to be seeking better health for humanity. It will continue to erode so long as it fails to answer these questions that our children need answers to, now.

Celeste McGovern is an award-winning independent journalist in Scotland. She reports on medical news, drug scandals, alternative health and more at https://www.facebook.com/ghostshipmedia/.