Homeopathy for Warts and All 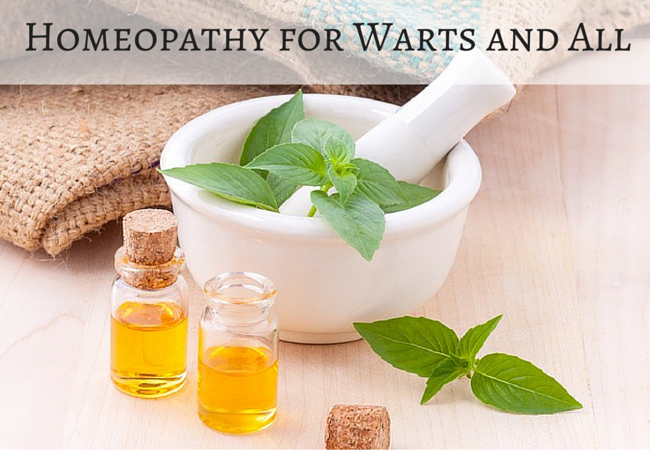 If homeopathy proves one thing, it's that no illness is local. Not even a wart.

Let's begin with a few case histories that illustrate this concept and highlight the effectiveness of homeopathic treatment for warts.

I recall a case from early in my career as a homeopathic physician. A mother brought her young son to me for treatment of his warts. It was immediately apparent that the child was out of sorts. He was quite irritable and the mother acknowledged that this was nothing unusual. It was his typical ornery demeanor.

I remember being unable to get a look at him because he refused to look at me. He averted his gaze and covered his face with his hands each time I tried to make eye contact. I asked the mother if he was sensitive to being touched. She confirmed that he disliked being touched and would often recoil when approached. With this information in hand, I prescribed a homeopathic remedy called Antimonium crudum, which is a sulfide compound made from antimony, an element on the periodic table (Sb: Atomic number 51).

At the return visit, the mother was quite pleased, not because her son's warts had cleared up, which they had, but because his chronically cranky mood had changed dramatically. She had not expected this, and the change was clear to me, too. Unlike the first visit, I was now able to look him in the eye and talk to him.

The thing that I remember the most, however, was the phone call I received soon afterwards. A pharmacist who had known the family for years wanted to know what I had given the child. He told me that when the mother had come in to pick up a prescription recently, he was stunned to find that he was able to converse with the boy for the first time since he had known him. I spent quite a bit of time on the phone that day answering the curious pharmacist's questions about homeopathy.

I once prescribed the same remedy for a young woman in her twenties. She had so many warts on her foot that they had consolidated into one very large, hard, thick crust that covered almost half the surface of the sole. Her regular doctor's attempts to burn and freeze them off had proven ineffective. I instructed her to take two doses of Antimonium crudum 30c every two weeks. It took about three months for the crust of warts to completely disappear.

Of course, if only all cases of warts were that easy to solve. Unfortunately, homeopathy doesn't work unless the correct medicine is prescribed, and sometimes it can be tricky business determining which medicine is needed. A young man once consulted me for the warts on his knee. I counted approximately 50 medium sized warts on his right knee, all of which had sprung up together a few months prior.

Several remedy prescriptions failed to yield any progress. I finally decided to prescribe a homeopathic medicine based upon his constitutional makeup rather than the warts themselves. He was instructed to take two doses of Ferrum metallicum 30c (a homeopathic remedy made from iron).

I received a phone call three weeks later. He wanted to let me know that the warts hadn't changed. He had decided not to keep his next appointment. I thanked him for the call and told him that I was sorry that the treatment hadn't been successful. To my surprise, he called back very next day. With a sound of amazement in his voice, he told me that he had woken that morning to find that all of the warts had vanished overnight! The two of us had a good laugh over the sheer weirdness of this sudden disappearance.

The conventional approach of cutting, freezing, or burning warts off comes with no guarantee that they will not recur.

Have you ever known a person who had his or her warts removed only to have new ones erupt in the same general vicinity? There's a reason for that. A wart is merely a local manifestation of an underlying systemic influence. Removing a wart by local means does nothing to change the underlying conditions that led to its development in the first place.

For those who may not be familiar with homeopathy, it is a 200 year-old therapeutic system based on the principle of similars. The symptom pattern of the sick individual is matched up with a substance capable of causing a similar symptom profile. Very small doses of this substance can provoke a paradoxical healing reaction capable of restoring the constitution to a healthy state of balance.

The reason why a homeopathic prescription for warts can be so effective is because it treats the whole person, not just the warts.

A well-chosen remedy tends to have a global, broad-spectrum effect on a person's overall health. In Case #1, the homeopathic remedy didn't just cure the irritable young boy's warts; it restored his whole system to balance, including his emotional state. Technically speaking, the remedy wasn't aimed at the warts; it was aimed at the child who had the warts.

Here are some brief descriptions of just a few commonly prescribed homeopathic wart remedies and their indications:

Antimonium crudum (Ant-c) – This remedy is for very hard warts that appear in groups that can coalesce as in Case #1 above. Sometimes the warts have a smooth appearance. Useful for warts on the soles and plantar warts. Children who need this remedy can be irritable and are averse to being looked at or touched. They often have digestive troubles and may have a peculiar craving for pickles or cucumbers.

Causticum (Caust) – This remedy is for large, rough, jagged warts (alone or in multiples) that can appear on the hands or face. More specifically indicated for warts on the tips of fingers, close to or under the fingernails, or on the nose or tip of the nose. Constitutionally speaking, individuals who need this remedy tend to be highly empathetic and sensitive to the sufferings of others. They can be tuned-in to issues of justice and injustice. They may cry easily.

Dulcamara (Dulc) – Indicated for flat, smooth warts that are small or large. They can be found on the face, hands, or fingers. People who need this remedy have a tendency to focus on family issues, concerns, and disagreements. They may also have health problems (asthma, diarrhea, arthritis, etc.) that are noticeably aggravated by cold damp weather.

Thuja occidentalis (Thuj) – This is perhaps the most commonly indicated homeopathic medicine for many types of warts. This all-purpose wart remedy can be useful for warts on the face, hands, knees, feet, and genitals. Indicated for plantar warts, venereal (sexually transmitted) warts, vaccine-induced warts, and another common wart-like condition called molluscum contagiosum (additional remedies for molluscum include Natrum muriaticum and Silicea).

Individuals who need this remedy often carry a secret feeling of shame or embarrassment over their warts (and other issues), which they view as a form of taint that makes them feel ugly or unlikeable. They may not admit this and it may be hard to detect, but it is a solid indication for this remedy. I once saw a patient who consulted me for other reasons. When I asked her why she had band aids on her fingers, she sheepishly admitted that they were covering warts that she didn't want others to know about because they made her feel ugly.

Successful homeopathic wart treatment should result not just in the disappearance of warts, but also general constitutional improvements. For example, it would be reasonable to expect the Nitric acid patient to become less worried about health issues and the Thuja patient to become less self-conscious and less focused on body image related issues.

As always, it is best to consult a trained professional when dealing with any heath problem. Homeopathic treatment in the hands of an experienced practitioner can yield excellent results for warts and all the baggage that comes with them.