Natural solutions for H. pylori are gaining increased attention due to the failure of conventional antibiotics to produce a permanent resolution of the condition without attendant adverse effects. In a previous post entitled "3 Natural H. Pylori 'Cures' That Are Clinically Proven," we reported on broccoli sprouts, probiotics, and black seed, as evidence-based natural interventions. Now, a study published in the International Journal of Antimicrobial Agents reveals that black seed in combination with honey results in the resolution of about 1 in 2 cases of H. pylori infection.

The study entitled, "Combination of Nigella Sative and Honey in Eradication of Gastric Helicobacter pylori Infection," provided background on the increasing problem of antibiotic-resistant cases of H. pylori in the studied Iranian population:

Due to the state of conventional treatment, the authors sought to test "new safe, feasible and affordable alternatives."

The study design was described as follows:

"Nineteen patients who had positive result for H. pylori infection by urea breath test (UBT) without a past history of peptic ulcer, gastric cancer or gastrointestinal bleeding, were suggested to receive one teaspoon of the mixture of Dosin (6 g/day of N. sativa as ground seeds and 12 g/day of honey) three times a day after meals for two weeks. The second UBT was used to detect the presence of H. pylori four weeks after completion of the test. In addition, symptoms of dyspepsia were scored before and after the study and analyzed with Wilcoxon signed-rank test."

The results were reported as follows:

"Fourteen patients completed the study. Negative UBT was observed in 57.1% (8/14) of participants after intervention. The median and interquartile range (IQR) of total dyspepsia symptoms was significantly reduced from 5.5 (5 - 12) to 1 (0 - 4) (P = 0.005). All the patients tolerated Dosin except for one who was excluded due to mild diarrhea. No serious adverse events were reported."

The researchers also pointed out that even though their combination of honey and black seed may not eradicate H. pylori in all cases, it has a palliative effect in gastrointestinal symptoms in non-ulcer dyspepsia. This is likely not true for conventional antibiotics which may have a wide range of adverse effects related to the depopulation of beneficial gut bacteria. In fact, we reported on the use of a special form of honey to treat one of the most common and deadly forms of antibiotic-related infections, namely , C. difficile. Learn more: Exotic Honey Comes To Rescue In Fighting Deadly C. Difficile 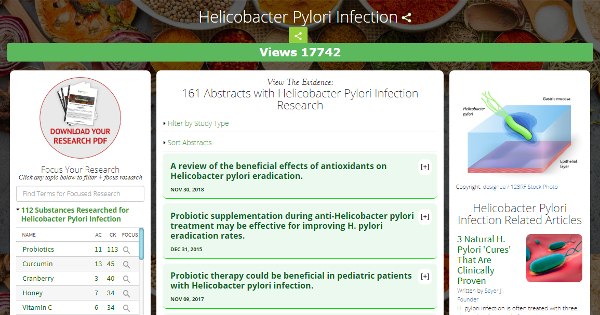