Views 9953
Posted on:
Tuesday, December 18th 2012 at 5:00 am
Written By:
Sayer Ji, Founder
This article is copyrighted by GreenMedInfo LLC, 2012
Visit our Re-post guidelines 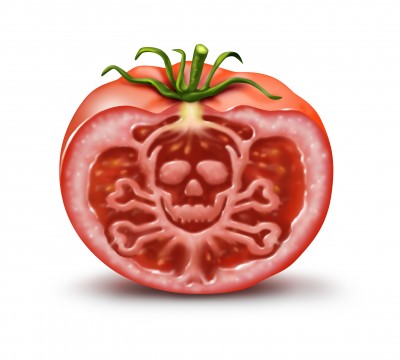 Hormones and/or hormone-mimicking chemicals are omnipresent environmental contaminants. Already found in places as varied as our teeth (dental sealant) to our paper products (receipts, money), our meat to our canned foods, new research now indicates that even fresh, whole vegetables and fruits are no longer immune to this growing biological and chemical threat.

A newly released study has found that a variety of substances with hormone-disrupting properties now widely contaminate commercially available fresh vegetables and fruits, in some cases at concentrations exceeding the recommended acceptable daily intake (ADI) for children as recommended by the Joint FAO/WHO Expert Committee on Food Additives (JECFA).

Published this month in the Journal of Agricultural and Food Chemistry, researchers at the Indian River Research and Education Center, University of Florida/IFAS, found the synthetic endocrine-disrupting chemicals bisphenol A (BPA), nonylphenol (NP), and the natural steroidal estrogen 17-β-estradiol, in vegetables and fruits randomly sampled from local markets, using gas chromotagraphy with tandem mass spectrometry.[i]

According to the researchers, the "BPA was detected in all vegetable and fruit samples, ranging from 0.2±0.1 to 9.0±4.9 µg kg-1, indicating significant exposure potential for humans."  Nonylphenol (NP), a chemical in the alkylphenol class mainly used to manufacturer detergents, was detected in pumpkin, sweet potato, citrus, and apple samples. Concentrations of 17-β-estradiol in vegetables and fruits ranged from 1.3±0.4 to 2.2±1.0 µg kg-1 except those in tomato and strawberry.

How Did These Chemicals End Up In Our Food?

The answer is wastewater and sewage sludge -- two things that, as many would be surprised to find, are commonly used to grow our food. While wastewater may contain as much as 95% water, the other 5% remaining is a biological and chemical atrocity. Even the sewage used in this degenerate, albeit highly productive (though unsustainable), form of farming has been renamed and transformed euphemistically into "biosolids," to make it somehow sound more palatable.

The reuse of wastewater for irrigation of agricultural land is a well established practice that introduces many contaminants into our environment and crops including pharmaceuticals, hormones and personal care products.

Other wastewater constituents include:

It is estimated that 90% of the global wastewater being used in agriculture today is untreated, meaning that it contains hundreds, if not thousands of potential biological and chemical toxicants that may ultimately end up in your food and body.

With the increasing use of raw or processed sewage to grow conventional food, it has become prone to overgrowth with pathogenic (even deadly) bacteria, which is why the USDA promotes food irradiation to nuke ("cold pasteurize") the intrinsically unsanitary food into the kind of sterility that also entails the destruction of its nutrition value.

Even when sewage is pretreated in order to remove chemicals, foreign materials, and microorganisms, up to 93% of highly concentrated active drug compounds still remain, including hormones and hormone metabolites that remain biologically active.[ii]

With the latest research now indicating that our modern, industrialized agricultural system is creating a toxic nightmare within our food, it is time for us to face the gravity of the situation, and make some real changes. All the more reason to support organically, and preferably locally, produced food by voting with our fork, as it does not utilize these intrinsically toxic farming practices.