Infantile Colic? What You Can Do 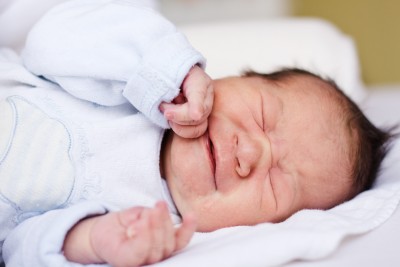 Infantile colic can be very stressful for parents whose baby is inconsolable during crying episodes. Colic is often defined by the "rule of three": crying for more than three hours per day, for more than three days per week, and for longer than three weeks in an infant who is well-fed and otherwise healthy.

A new systemic review published this month in the Cochrane Library, evaluated the results of studies designed to address the efficacy of manipulative therapies (specifically, chiropractic, osteopathy and cranial manipulation) for infantile colic in infants less than six months of age.

The authors concluded that majority of clinical trials seemed to indicate parents of infants using manipulative therapies for colic reported fewer hours of crying per day and was statistically significant. The trials also indicate that a greater proportion of those parents reported improvements that were clinically significant.

George Lewith, MA, DM, FRCP, MRCGP, professor of health research at the University of Southampton commented "the majority of the included trials indicate that the parents of infants receiving manipulative therapies reported fewer hours crying per day than parents whose infants did not. This difference is statistically significant and important for those families who experience this condition. These studies show that in this small sample there were no adverse effects from using these treatments."

Few parents understand the importance of the brain's control over the digestive system in their child. The brain controls digestion, along with many other functions, through the Autonomic Nervous System. However, the messages have to travel unimpeded from the head to the body. We observe that stressful births (even C-sections) can strain the head and neck, causing interference in the nerve signals between the brain and the digestive system.

Research released in 2006 looked at the intestinal flora (bacteria) of both colicky and non-colicky infants. The research found that the colicky infants tended to have less of a type of bacteria called Lactobacillus. Further research released in early 2007 looked at a possible treatment for colic, based on the assumption that decreased Lactobacillus was causing the colic.

It is always a good idea to educate yourself before making decisions regarding your child's health. Once you understand that drugs like Prilosec and Prevacid stunt the development of a newborn's gastric cells which can lead to chronic malabsorption problems, and that these drugs could make babies more vulnerable to swallowed bacteria usually killed by stomach acid - it becomes a lot easier to make an informed decision. Most importantly, there is no long term study of the results of the current medication schedule for infantile colic.

Dr. Peter J. Braglia, D.C. has a mission to educate, adjust, and inspire a health transformation in as many families as possible toward optimal health. He believes in better health through better living by working with nature, rather than against it.