Views 10826
Posted on:
Monday, October 30th 2017 at 4:30 pm
Written By:
Jefferey Jaxen
This article is copyrighted by GreenMedInfo LLC, 2017
Visit our Re-post guidelines 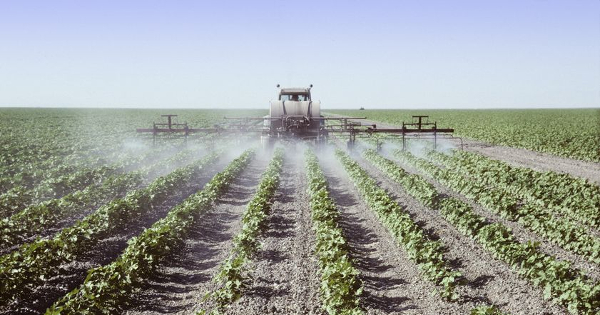 The public unfolding of the dangers of glyphosate, Monsanto's cancer-causing herbicide, appears to be reaching a crescendo, as mounting evidence is now threatening to bury this failed agricultural technology once and for all.

Even mainstream publications, once sympathetic to and often using Monsanto-funded ghostwriters, are being forced to alter their narratives to fit with the groundswell of popular facts, demanding coverage by the public. A new study published in The Journal of the American Medical Association (JAMA) titled Excretion of the Herbicide Glyphosate in Older Adults Between 1993 and 2016 reveal findings no longer able to be ignored. The study shows that human exposure to glyphosate among the participants has increased by 500 percent in the past two decades.

Urine samples from adults older than 50 were collected in1993-1996 and then again in 2013-2016 in Southern California. 100 people were randomly selected from the 1000 subjects who were still active in the study originally consisting of 6629 participants. Researchers found a large increase in the baseline during the span of the study. In the years of 1993-1996, only 12 percent of participants had detectable levels of glyphosate in their urine. By 2013-2016, this number increased to 70 percent. The researchers also found a thirteen-fold increase in glyphosate concentrations between the two collection periods. Perhaps even more alarming is that the study represents one of the few mainstream scientific efforts to figure out how much we are being exposed to this chemical.

A recent vote on whether to renew glyphosate’s license for another 10 years in the European Union failed, spurring the European Commission to most likely negotiate a shorter renewal period with EU countries. Meanwhile, a European citizens initiative to ban glyphosate, reform the pesticide approval procedure, and set EU-wide mandatory reduction targets for pesticide use has raised 1.32 million signatures. The EU's 28-member state process for deciding upon the future of glyphosate's licensing appears to have ignored recent court discoveries, which were made known to the public via The Monsanto Papers released from the landmark San Francisco class-action court case alleging Monsanto's glyphosate-based formulations caused non-Hodgkin’s lymphoma. Internal Monsanto documents show collusion with the US Environmental Protection Agency to kill a 2016 investigation into glyphosate's documented dangers and possible reclassification, reveal attempts to destroy the World Health Organization's IARC 2015 ruling, which labeled glyphosate as a Group 2A carcinogen, expose ghostwriting of pro-Monsanto mainstream media articles by Monsanto staff, provide evidence for Monsanto's direct involvement in the illegitimate retraction of the most damning independent study on glyphosate's cancer causing properties [The Seralini Study], and contain shocking admissions that Monsanto's glyphosate-containing formulation Roundup® has not been properly studied by Monsanto for carcinogenicity.

Unlike the EU, California has added glyphosate to the list of chemicals that can cause cancer under California’s Proposition 65. Despite being the most widely applied pesticide in the world, glyphosate is still not monitored by the Department of Agriculture's pesticide data program or the Centers for Disease Control and Prevention's (CDC) program on human exposure to environmental chemicals. The extent of glyphosate's contamination and the refusal by regulatory agencies to monitor it were both made glaringly obvious by the parent-led organization Mom's Across America when it made the FDA, CDC, EPA, NIH, the California Department of Health, and California Senator Barbara Boxer aware in writing that two independent labs found glyphosate contamination in five vaccines. Documents obtained by Mom's Across America via a Freedom of Information Act request showed a coordinated effort by the FDA and the CDC to damage control the issue while stonewalling the requests to test for  and recall glyphosate-contaminated batches of vaccines.

To date, GreenMedInfo.com remains one of the world's largest and longest running publicly searchable storehouses of glyphosate research and information that both Monsanto and many oversight agencies wished didn't exist.

For additional research on the dangers of glyphosate, visit our database on the subject. 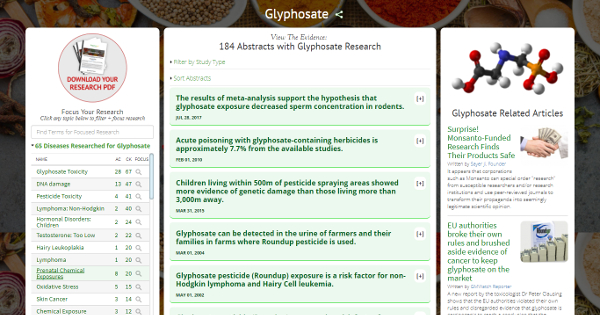