Views 48832
Posted on:
Sunday, April 8th 2018 at 6:45 am
Written By:
GreenMedInfo Research Group
This article is copyrighted by GreenMedInfo LLC, 2019
Visit our Re-post guidelines 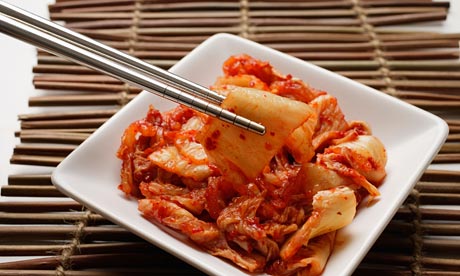 Koreans have been enjoying salted and fermented vegetables known as kimchi for about 2000 years. It's typically served with steamed rice at every Korean meal. But this spicy dish is much more than a condiment

Researchers in Korea published a comprehensive review of the health benefits of kimchi as a probiotic. In it they cite 130 studies attesting to the amazing healing properties of this humble food.

Probiotics are the good bacteria populating the gut. The human gut contains over 400 strains of bacteria and the mix of different strains in each person is very individual.

Among other things, probiotics:

In addition, probiotics in kimchi help the body detoxify from toxins like bisphenol A, heavy metals, perclorate, and organophosphorus pesticides.

The balance of good and bad bacteria in the gut can be disrupted by the use of antibiotics. Gut bacteria is also disturbed by excessive alcohol use, stress, diseases and toxins. All of these allow harmful bacteria to thrive. To rebalance the scales, good bacteria or probiotics are needed to repopulate the gut.

These good bacteria feature prominently in fermented foods like kimchi. Many bacteria strains are involved in the fermentation of kimchi but the most prominent is lactic acid bacteria. It's the source of many of kimchi's health benefits.

In addition, all of kimchi's traditional ingredients are health foods in their own right including cruciferous vegetables, garlic, ginger, and red pepper. Kimchi also contains high levels of vitamins (vitamin C, beta-carotene, and vitamin B complex), minerals (sodium, calcium, phosphorus, iron, and potassium), and dietary fibers.

According to the new Korean study, research shows that kimchi has a long list of health actions including anticancer, anti-obesity, anti-diabetic, and anti-constipation. It promotes brain, skin, and colorectal health. It reduces cholesterol and blood clots, and has anti-oxidant and anti-aging properties.

Cancer. The Korean researchers developed a kimchi recipe to boost its anticancer effects. They added mustard leaf, Chinese pepper, and Korean mistletoe extract. In lab tests on human colon cancer cells, the mistletoe extract increased inhibition rate from 62% to 80%.[i] Animal studies show that kimchi also exhibits tumor suppression action. Researchers believe the anticancer effects of kimchi are mostly due to regulation of apoptosis of cancer cells and the inhibition of inflammation.

Obesity. Researchers tested the effects of kimchi on body weight in a group of obese women. Women who supplemented with capsules containing either 3 or 6 grams of freeze-dried kimchi every day achieved a remarkable decrease in body weight, visceral fat, and body mass index compared with the control group. Serum triglycerides were also significantly decreased in the kimchi-supplemented group compared with the control group.[ii] Other studies show kimchi lowers fasting blood glucose, fasting insulin, blood pressure, and leptin levels.[iii]

Lipid Profiles. In a study of 102 healthy Korean adult men aged 40 to 64 years researchers found eating up to 453 grams of kimchi a day was linked to higher good HDL cholesterol and lower levels of the so-called bad LDL cholesterol.[iv]

Lactic acid bacteria from kimchi have been shown to have the following probiotic properties[v], [vi]:

Thousands of years ago, the major ingredient in kimchi may have been radish. Today's version uses Chinese cabbage developed in the 18th century.

The most popular version in Korea is made by lacto-fermentation of cabbage, radish, green onion, red pepper powder, garlic, ginger, and fermented seafoods (jeotgal).