Views 30234
Posted on:
Saturday, June 22nd 2013 at 9:15 am
Written By:
Margie King, Health Coach
This article is copyrighted by GreenMedInfo LLC, 2019
Visit our Re-post guidelines

Many well-intentioned workout resolutions have been thwarted by the first signs of sore, stiff muscles in the days following a visit to the gym. One study found that two common kitchen spices help relieve that post-workout muscle pain.

Researchers at Iran's Isfahan University of Medical Sciences studied the effects of ginger and cinnamon on the muscle pain of 60 fit female competitive Taekwondo players, aged 13-25 years. The women were divided into three groups. For six weeks, each group took three grams (1 tsp = 4 grams) of either powdered ginger, cinnamon or placebo every day.

During the study, the women were tested for an indicator of inflammation and for muscle soreness. The results, published in the International Journal of Preventive Medicine, showed that women in both the ginger and cinnamon groups had significantly less muscle soreness after exercising than the placebo group. A similar study from the University of Georgia, also confirmed ginger's ability to relieve muscle soreness after strenuous exercise.

The researchers did not find any difference in the inflammation marker among the three groups despite other studies showing strong anti-inflammatory qualities of ginger and cinnamon. They speculated that the three gram dose may have been insufficient to make a measurable difference.

Both ginger and cinnamon have been used medicinally for thousands of years. Each contains a wide range of compounds shown to curb inflammation, reduce oxidative stress and modulate other healing mechanisms within the body.

Ginger has a long list of amazing health benefits. It's been proven more effective against bacterial staph infections than antibiotics; can kill cancer cells; eases ulcerative colitis and acid reflux; and alleviates the effects of gamma radiation.

Ginger has been shown to be helpful in a relieving stomach upset, diarrhea, and nausea due to seasickness, motion sickness, morning sickness and chemotherapy. It also relieves pain, swelling, and reduced mobility in those suffering from osteoarthritis and rheumatoid arthritis. Its anti-viral properties help in the prevention and treatment of the common cold.

Cinnamon, the most popular spice, has been used for millennia both for its flavoring and medicinal qualities. The many health benefits of cinnamon include lowering blood sugar levels; improving insulin sensitivity; relieving inflammation from arthritis; alleviating menstrual cramps; supporting healthy blood clotting; fighting the overgrowth of bacteria, fungus and yeast; preventing colds and flu; boosting memory; and improving digestion.

Add cinnamon to a daily smoothie, applesauce or yogurt. You can also drop a cinnamon stick into your steeping tea or a pot of coffee.

Then hit the gym.

[Buyer Beware: Always remember to buy only certified organic spices, as many conventional brands are irradiated with nuclear waste in what is known as "cold pasteurization." Also, be aware that the cassia form of "Cinnamon" contains furocoumarins, naturally occuring blood thinners, so it may be best to purchase the Ceylon or Verum varieties.]

For other ways Cinnamon can help keep your health in order, visit the GreenMedInfo database on the subject below. 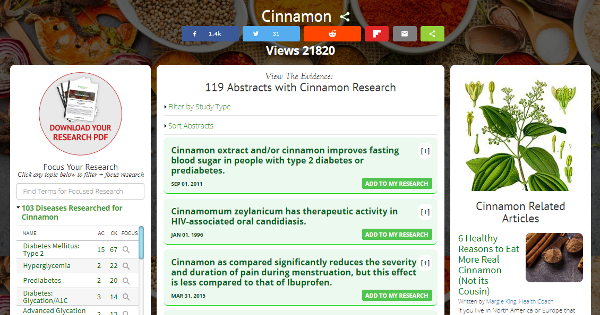