Lion's Mane: Shaggy Fungi for Your Brain and Neuronal Health 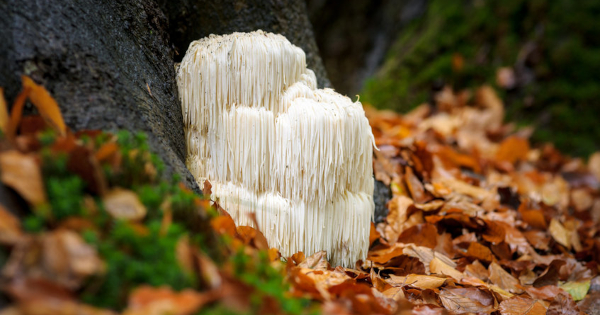 These unique fungi have a taste similar to lobster and a "mane" like a lion's, but their greatest attribute of all may be their propensity to boost cognitive function and support a healthy brain

Lion's mane mushrooms (Hericium erinaceus), with their shaggy, mane-like spines, stand out among fungi not only for their appearance but for their mild, sweet, seafood-like flavor. Like other mushrooms, lion's mane are multi-faceted healers, with antimicrobial, antihypertensive, antidiabetic and wound healing properties among their many therapeutic properties.[i]

Often said to have a taste similar to crab, lobster or scallops, however, it's interesting that -- like seafood -- lion's mane mushrooms are very much a food for your brain. Of the 68 diseases and conditions that lion's mane mushroom may support,[ii] many of them relate to the nervous system, including cognitive function, memory, dementia, depression, anxiety and sleep disorders.

Lion's mane mushroom, which also goes by the names yamabushitake, bearded tooth and pom pom mushroom, contains more than 35 beneficial polysaccharides that may help prevent or treat cancer, gastric ulcers, diabetes, hyperlipidemia, liver injury and neurodegenerative diseases, according to a review published in the International Journal of Biological Macromolecules.[iii]

With a long history of use in Traditional Chinese Medicine, including for brain and neurological health, it's now known that two terpenoid compounds-- hericenones and erinacines -- in these mushrooms and their mycelia may stimulate the synthesis of nerve growth factor (NGF).[iv]

Lion's mane is revered for its regenerative capacity in the peripheral nerve and has been shown to trigger neurite outgrowth in brain, spinal cord and retinal cells.[vi] It also stimulates the activity of nerve growth factor, which is important for the growth and differentiation of neurons.[vii]

Lion's mane may be effective in improving mild cognitive impairment (MCI). In adults with MCI, those who took lion's mane powder three times a day for 16 weeks significantly increased their scores on a cognitive function scale compared with those who took a placebo, with no adverse effects noted.[viii]

Hericenones in lion's mane are believed to be responsible for some of the mushroom's beneficial effects on brain neural networks and improvements to cognitive function. This brain-boosting mushroom has also been found to improve memory in mice.[xi]

Lion's mane may be an effective complementary and alternative remedy against depression, with research suggesting it ameliorates depressive disorder through a variety of mechanisms, including neurogenic/neurotrophic and anti-inflammatory pathways.[xii] Animal studies also suggest that lion's mane may reverse depressive behaviors caused by stress by modulating monoamine neurotransmitters and regulating BDNF pathways.[xiii]

Among women, meanwhile, eating lion's mane cookies for four weeks led to a significant reduction in symptoms of depression and anxiety, including irritability and anxiousness.[xiv]

Lion's mane mushrooms' neurotrophic compounds are known to pass through the blood-brain barrier and have been used to treat cognitive impairments, Alzheimer's disease and Parkinson's disease.[xv] In a study of patients with mild Alzheimer's disease, those who took lion's mane mycelia capsules for 49 weeks had improvements in their ability to carry out daily activities, such as personal hygiene and preparing food.[xvi]

In 2016, research published in the International Journal of Molecular Sciences also concluded that lion's mane may provide "neuroprotective candidates for treating or preventing neurodegenerative diseases,"[xvii] while animal studies have shown its promise for ameliorating pathologies related to Alzheimer's disease.[xviii]

The exact mechanisms behind lion's mane mushrooms' neurological gifts are unknown, but what is known is that these fungi offer multiple beneficial effects for your brain and overall health, including:[xx],[xxi]

The neuroprotective metabolites in lion's mane mushrooms may also be useful for preventing age-related neurodegenerative diseases, with researchers suggesting them as a promising therapeutic for healthy neuro-aging.[xxii] Lion's mane mushrooms can be consumed in supplement form or used fresh in cooking. While they're not widely available in the U.S., if you come across lion's mane mushrooms in a specialty shop, don't hesitate to snap them up.

These flavorful fungi can be prepared like most other mushrooms -- by sautéing along with grass-fed butter or ghee -- and meld well with stir-fry vegetables or other ingredients that you might pair with scallops, due to their similar taste.

Lion's mane mushrooms also have a hearty, meaty texture, making them suitable for soups, stews and omelets or as a tasty side dish on their own. If you can't find lion's mane mushrooms near you, you can find specialty growing kits online to try your hand at growing your own at home.