The Living Battle Within Breast Milk: Developmental Direction vs A Toxic Toll 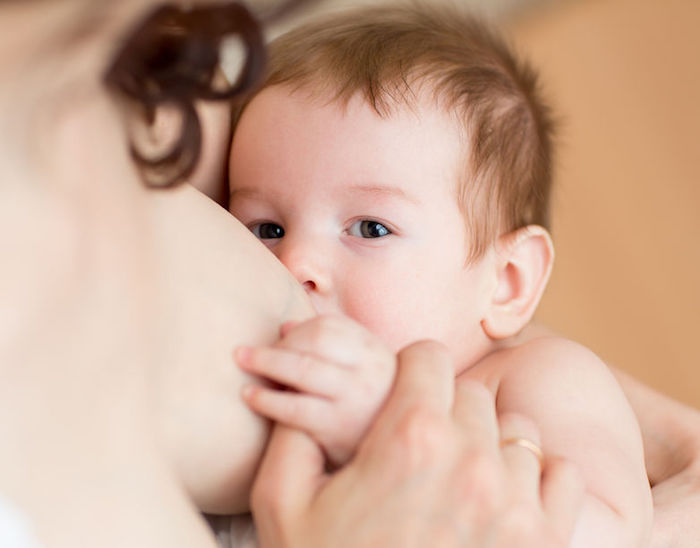 The Living Battle Within Breast Milk

Breast-milk directs your baby’s development. Learn if your breast milk is contaminated, why you should breast-feed anyway, and how to detox it.

Pediatricians and nutritionists agree that breast milk is the ideal food for newborns and babies. However, a blood pesticide study conducted on Middle Eastern citizens surprised researchers.

In the Middle East, pesticides are considered valued possessions. Because agriculture has become dependent upon pesticides for continued production of food, Middle Easterners hide their pesticide caches under their beds. As a result, these people have shockingly high levels of pesticide in their blood. Only one group of Middle Easterners was found to have very low pesticide blood levels.

Mothers who had breast-fed their babies.

What happened? Because of its high fat content, breast milk is the perfect repository for toxic pesticides. So the mothers simply passed the chemicals on to their newborns when they nursed them.

As a result, their breast-fed infants were heavily exposed to neurotoxic chemicals while their brains were developing rapidly and most vulnerable. And as we know, toxic chemicals are lipophilic, attracted to the heavy fat content of the fetal brain where they settle and disrupt brain architecture.

As mammals, breast-feeding is the natural way to feed human young, but breast-feeding can be an emotionally charged issue. Although it provides the perfect nutrients for newborns, breast milk can obviously be heavily contaminated, depending on the mother’s toxic exposure history. Nevertheless, there are ways to ensure that your breast milk provides a healthy food for your baby and there are excellent reasons to breast feed even if your milk is contaminated.

Nothing is better and healthier for a baby than breast feeding. Mother’s milk is programmed to foster the newborn’s proper growth and development. It is a living substance and is now thought to be involved in developmental “training” for the baby.

Even more important, researchers have now learned that breast milk contains the mother’s gastrointestinal microbiota which benefit the health of the infant. It is the first probiotic food f or the baby. MicroRNAs which regulate gene expression abound in human breast milk.[4] MicroRNAs help control the baby’s body fluid balance, thirst, appetite, immune response, and development.[5] The presence of RNAs suggests that breast-feeding may have the ability to affect or even prevent the incidence of genetically-influenced disorders. These factors create an important means of communication from the mother’s body in guiding the development of the infant. Stem cells provide yet another valuable component of mother’s milk, although research hasn’t determined all the benefits.

“The discovery of breast milk stem cells is an important advance in breast milk research in the last decade. Their normal function is still somewhat of a mystery; however, they open up a whole new world of possibilities for not only the field of lactation, but also stem cell and cancer research and regenerative medicine. The greatest beneficiaries currently are breastfed infants, ingesting thousands to millions of these cells every day from mother’s milk, even late in lactation…Importantly, their discovery now reveals a component of breast milk that will never exist in artificial formulas, generating numerous implications for public policy on early infant nutrition.”[6]

It makes sense that harmful chemicals should be avoided before and during lactation. It’s clear that chemicals are stored in body fat and when fat is broken down during pregnancy, these chemicals tag along, contaminating the fetal blood supply. The same is true for breast milk. In fact, breast-feeding is the best way to rid a mother’s body of toxins.

Lactation breaks down fat tissue to aid in the production of breast milk. This accounts for the added benefit of weight loss many women think they’re getting when they decide to breast-feed their infants. Unfortunately, this also results in the release of chemicals that may have been stored in the mother’s fat for years. Nursing mothers can discharge as much as 20 percent or more of their lifetime chemical stores. [7] Unfortunately, those chemicals go directly to the nursing infant’s tiny body and brain.

And it’s not just the fat-soluble, stored chemicals; even those chemicals that leave the body relatively quickly can contaminate breast milk. In fact, breast milk is the preferred route of excretion for many toxins.

Sadly enough, everyone on the planet carries a chemical body burden. Most of us have been exposed to chemicals since conception through sources like our mothers’ bodies and milk supplies, the food we eat, and the air we breathe. Because of these varied sources of exposure, chemical burdens vary widely.

Chemicals with known neurotoxic effects end up in breast milk in heavy quantities. Solvents, such as tetrachloroethylene cross over into breast milk at three times the level seen in the mother’s blood. For pesticides such as Dieldrin and DDT, the amount in breast milk can be up to seven times that in the mother’s blood, while PCBs can cross into breast milk at levels four to ten times greater. Breast-fed infants whose mothers ingested PCB-contaminated rice in Japan in 1968 suffered serious neurological consequences. [8]

However, apparently breast milk pesticide concentrations are declining in areas where organochlorines have been banned. Breast milk studies in Canada show a decrease in hexachlorobenzene, DDT, heptachlor epoxide, dieldrin, some chlorinated benzenes, and PCBs. Canadian breast milk contamination appears to be one of the lowest among the industrialized nations. [10]

In countries that banned PCBs three-four decades ago, PCBs are still found in levels that exceed “safe” limits. Excess PCBs in breast milk are linked with reduced newborn neurological capacity. Testing among toddlers 18 to 24 months old showed scores 4–9 points lower on Bayley Scales for breast-fed children when the milk was contaminated with PCBs or DDE. Where mothers lived and ate food grown next to a stream polluted with PCBs from an upstream factory, their breast-fed babies showed a significant predisposition to developing various diseases. [3]

In some of these situations, an infant breast-fed for twelve months would receive around 10 percent of the cumulative exposure dose/per body weight that would be received by an adult with fifty years exposure. That would amount to 1.7 times the concentration of the chemical in the mother.

We know that chemicals and the vulnerable developing baby do not mix. We also know that even if we stringently avoid chemicals from this day forward, our bodies may still contain stored chemicals that can contaminate our breast milk. The question now has to be: how do I determine the extent of my chemical body burden and what do I do about it?

If any of the following factors apply to you, you may have significant contamination levels.

Mothers Should Breast-Feed But Reduce Toxins

Most experts argue that the advantages of breast-feeding largely outweigh the dangers of chemical contamination. Especially, the new discoveries of the living features of breast milk, make it all the more crucial that mothers breast-feed.

We must remember that neither our government nor the scientific community have undertaken large-scale studies on the developmental effects of chemicals or combinations of chemicals. The toxic load of a single breast milk meal may not constitute a heavy exposure; however, babies nurse several times a day and those toxic exposures are added to the ones they receive from every other source of chemicals in their environment. The dozens of chemicals a baby can access daily, together can enhance and synergistically increase the toxicity of each. And as one researcher so aptly put it, “no evidence of harm” is not the same as “evidence of no harm” and to this date we have adequate data for neither. [12]

Ultimately, the best approach is to reduce toxins in the breast milk. In the future, as science furthers our knowledge, hopefully we may learn that the living features of breast milk may protect the infant from some toxins in their natural food. Another question that comes to mind is; does breast feeding help overcome deficiencies or toxic damage during pregnancy? Does it help repair damaged brain architecture? The possibilities appear endless.

If concerned, women can get their breast milk tested at any time via labs that test for toxins. A small amount of fluid can be pressed from the nipple of any woman, even those who are not breast-feeding or who have never been pregnant. That amount of fluid is enough to get a good idea of how much contamination your baby would receive from your breast milk.

No matter what level of toxins are in your breast milk, instead of foregoing breast feeding, you should take steps to reduce your toxic load. There are many ways you can easily and significantly reduce the amount of chemicals your body passes on to your baby.

While some detoxification techniques include heavy weight loss and saunas, those are two practices that should not be undertaken during breast-feeding. Instead:

Mothers who work, or for other reasons can’t breast-feed every meal, can still provide infants with crucial living factors by breast-feeding daily as many times as possible. This will ensure their babies ingest the health-giving factors that commercially produced formulas will never supply. 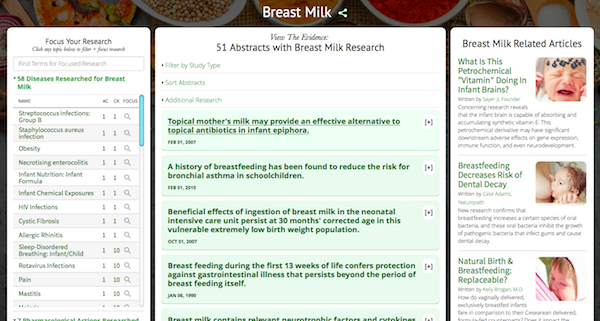 For research on the benefits of breast milk, visit the GreenMedInfo.com Research Dashboard.