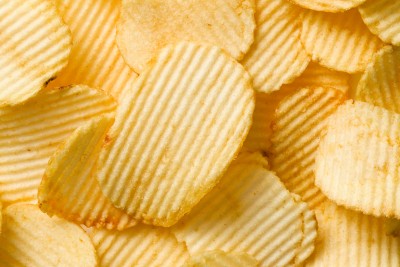 The diet food industry's solution to the spread of obesity has been to reduce the calories in processed foods on the theory that the same volume of food will satisfy your appetite regardless of nutrient content. They had great hopes especially for the idea of low-fat potato chips as a weight loss aid. But it turns out that the artificial fat substitutes used in low-fat foods may actually lead to weight gain and obesity.

Researchers at Purdue University conducted a study using laboratory rats fed either a high-fat diet or a low-fat diet. The study found that fat substitutes can interfere with the body's ability to regulate food intake. Our bodies get confused with artificial ingredients and the study shows that can lead to inefficient use of calories and ultimately weight gain.

Olestra was a marketing disaster in the last 1990s thanks to the gastrointestinal side effects of eating olestra in high quantities, but it continues to be an ingredient in some low-fat chips including Lays Light and Pringles Light chips.

For rats on the high-fat diet, the group that ate both types of potato chips consumed more food, gained more weight and developed more fatty tissue than the rats that ate only the regular chips. The fat rats also didn't lose the extra weight even after the potato chips were removed from their diet.

What could be going on? The researchers hypothesize that food with a sweet or fatty taste usually indicates to your body that it will be getting a high number of calories, and the taste triggers various responses by the body, including salivation, hormonal secretions and metabolic reactions. Fat substitutes can interfere with that relationship when the body expects to receive a big burst of calories but is fooled by a fat substitute.

What's a dieter to do? Avoid any artificial foods, whether they are fats or sweeteners, and stick to real foods. If you must have potato chips, eat the real deal.