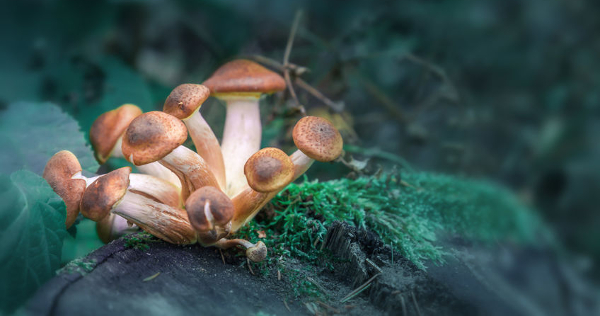 Are you looking to support positive mental health without using pharmaceuticals? Psilocybin may be gaining mainstream acceptance by providing a safe "trip" out of desolation and into a more open, positive state of mind

Psilocybin (4-phosphoryloxy-N, N-dimethyltryptamine) is the main psychoactive compound in "magic mushrooms," a euphemism for certain types of wild mushrooms found in North and South America and parts of Europe and Mexico. Psilocybin is classified as a tryptamine, naturally occurring alkaloids that include serotonin and melatonin, essential mood-regulating chemicals that function as neurotransmitters in the brain.[i]

Consuming psilocybin produces hallucinogenic effects similar to those of LSD (lysergic acid diethylamide) and DMT (dimethyltryptamine), other well-known tryptamines, by activating serotonin receptors in the brain, particularly the prefrontal cortex, the region of the brain affecting mood, perception and cognition.[ii] Such actions are called serotonergic -- they modify the way serotonin affects the body.[iii]

More than 180 species of mushroom have been identified as containing psilocybin or psilocin, a structurally similar compound that occurs naturally and is the byproduct of the body's metabolization of psilocybin.[iv] Dried mushrooms typically contain 0.2% to 0.4% psilocybin and only trace amounts of psilocin.[v]

Hallucinogenic or "psychedelic" mushrooms have been used by native and indigenous peoples in healing and religious ceremonies for centuries. According to the May 2020 scientific study titled "Psilocybin: from ancient magic to modern medicine," South American Aztec Indians referred to these mushrooms as teonanacatl, or "God's flesh."[vi]

Prior studies on hallucinogenic substances such as mescaline and LSD have led researchers to theorize that psilocybin's actions on serotonin receptors are responsible for observed effects on mood and perception, such as visual and auditory hallucinations and difficulty discerning fantasy from reality.[vii]

Studies on psilocybin, which can be obtained organically from select mushroom species or reproduced synthetically in a lab, have produced beneficial effects on mood, personality and mental state, although scientists admit that the underlying mechanisms behind these benefits are still unknown. [viii]

A study published in the March 2020 issue of European Neuropsychopharmacology attempted to unlock these mysteries by studying psilocybin's effect on mindfulness. According to researchers, mindfulness signifies "presence of mind" or "attentiveness to the present," and is positively associated with income and socioeconomic status, but negatively associated with psychological distress and mental health scores, hence it is often purposely cultivated as part of mental health interventions.[ix]

In the study, 10 healthy volunteers were enlisted who were "psychedelic-naïve." They underwent positron emission tomography (PET) neuroimaging of the brain at baseline and one week after a single oral dose of psilocybin (0.2 to 0.3 mg/kg).

Primary focus was placed on the neocortex, site of the highest expression of serotonin 2A receptor sites, with the cerebellum used as a reference region. Personality and mindfulness questionnaires were completed at baseline and at the three-month follow-up point.

Psilocybin induced an altered state of consciousness for all participants. Eight of 10 volunteers had a "complete mystical experience," defined as a score of at or above 60% of possible maximum values for ineffability, positive mood, transcendence of time and space, and mystical experience. PET scans revealed no difference in the neocortical region of the brain at baseline and at follow-up.

However, test results revealed statistically significant increases in personality openness and mindfulness, with more self-rated positive changes than negative changes. Researchers concluded that a single dose of psilocybin can positively affect well-being and reduce clinical symptoms of depression and anxiety, and suggested that these effects can be long lasting.[x]

Other studies add to the evidentiary pile of psilocybin's medical and therapeutic potential. Some researchers are even calling magic mushrooms a "game-changer" for treating severe depression and anxiety. A 2016 study out of Johns Hopkins University School of Medicine in Baltimore, Maryland, examined the use of psilocybin to treat 51 cancer patients with life-threatening diagnoses and symptoms of depression and/or anxiety.

The randomized, double-blind trial investigated the effects of a very low (placebo-like) dose (1 or 3 mg/70 kg) versus a high dose (22 or 30 mg/70 kg) of psilocybin administered in counterbalanced sequence with five weeks between sessions and a six-month follow-up. Participants' moods, attitudes and behaviors were monitored and reported on throughout the study by the participants themselves, clinical staff and trained community observers.

Results were crystal clear: high doses of psilocybin produced large decreases in depressed mood, anxiety level and anxiety about death, as rated by both participants and community observers.

High doses of psilocybin further corresponded to increases in quality of life, life meaning and optimism. These changes were sustained at the six-month follow-up point, with about 80% of participants continuing to show clinically significant decreases in depressed mood and anxiety.

The study participants attributed their improved attitudes about life, themselves, their relationships and personal spirituality to the high-dose experience, with more than 80% endorsing moderately or greatly improved well-being and life satisfaction, changes that were apparent even to the community observers.[xi]

It's Time to End Psilocybin Prohibition

Buoyed by positive results in the cancer trial, Johns Hopkins researchers conducted another study on psilocybin, published May 2020 in the journal NeuroImage. The focus of this study was the claustrum, the region of the brain believed by some to be the seat of consciousness, responsible for your sense of self and universal awareness.[xii]

Researchers took functional MRI scans, known as fMRIs, of the claustrum brain region of 15 individuals after taking either psilocybin or a placebo. Scans showed that psilocybin reduced neural activity in the claustrum by 15% to 30%, activity that corresponded with stronger subjective drug effects as well, such as reported emotional and mystical experiences.

Psilocybin also appeared to change the way the claustrum communicated with regions of the brain involved in hearing, attention, decision-making and remembering.[xiii]

"Our findings move us one step closer to understanding mechanisms underlying how psilocybin works in the brain," said Frederick Barrett, Ph.D., assistant professor of psychiatry and behavioral sciences at the Johns Hopkins University School of Medicine and a member of the school's Center for Psychedelic and Consciousness Research, in a news release. "This will hopefully enable us to better understand why it's an effective therapy for certain psychiatric disorders, which might help us tailor therapies to help people more."[xiv]

While the U.S. Drug Enforcement Agency (DEA) currently lists psilocybin as a Schedule I substance, claiming that it has a high potential for abuse and no known medical uses,[xv] research over the past decade, such as that being conducted at Johns Hopkins University, has challenged this assessment, especially with regard to mental health.

Researchers at Johns Hopkins Medical Center previously issued a statement explaining that clinical trials have repeatedly demonstrated psilocybin to be a low-risk drug with low potential for abuse, with no known lethal overdose level.[xvi]

Combined with psilocybin's significant promise as a medical intervention, scientists recommended that the DEA reconsider their erroneous and restrictive Schedule I designation and reclass the substance to Schedule IV, the same category as prescription sleep medication.

To learn more about the potential mental health benefits of psilcybin mushrooms, visit the GreenMedInfo database on the subject. 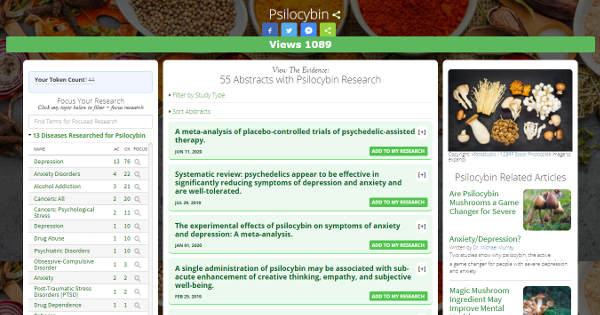