Magnesium-Rich Foods and Why You Need Them 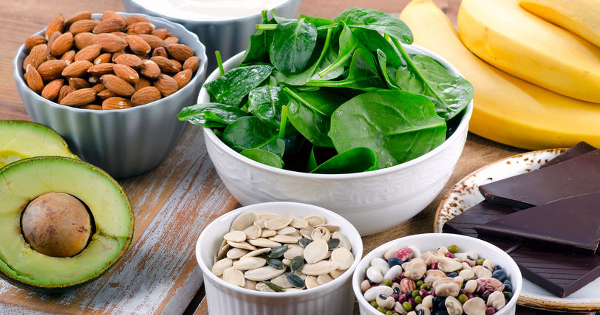 Magnesium (Mg) is considered a healthy mineral essential to your body, but it is estimated that 75% of Americans and people around the world are well below the recommended daily intake of Mg.[i] Luckily, there is an easy fix, since magnesium is bountiful in many foods.

Healthy omega-3 fats and magnesium are also abundant in salmon, tuna and avocado.[vi] Whole grains such as quinoa, brown rice, oatmeal, buckwheat and even wild rice (technically a grass) are filled with magnesium.[vii] For a list of the top 25 magnesium-rich foods, see Table 1.

Magnesium in your diet helps to prevent diseases and lessen the harshness of some diseases if you get them. Magnesium has neuroprotective, cardio-protective, anti-hypertensive, anti-inflammatory, anti-obesity and hypoglycemic properties.

A magnesium deficiency or low level of magnesium in your food creates an out of balance condition in your body linked to many diseases from diabetes, heart disease and metabolic syndrome to depression and neurological disorders.

Magnesium has many protective properties, such as glucose or blood sugar moderating and insulin regulating, lowering risk for Type 2 diabetes (T2D) and improving outcomes for Type 1 diabetes (T1D).

Magnesium intake significantly improved glucose parameters in people with diabetes and also improved insulin-sensitivity parameters in those at high risk of diabetes in a review of 18 randomized clinical trials, including a total of 670 diabetic and 453 at risk for diabetes patients.[viii]

In another meta-analysis of 637,922 individuals, the risk of T2D was reduced by 17% across all the studies; 19% in women and 16% in men when magnesium was increased in their diet.[ix]

A magnesium deficiency is seen as a contributing factor in insulin resistance for T2D patients.[x] In a 2017 study of 71 children with T1D, magnesium supplementation improved glycemic control and lipid profiles while decreasing complications such as hypomagnesaemia (clinical magnesium deficiency).[xi] For the 52,684 without known diabetes, dietary magnesium was found to lower fasting glucose and insulin, two risk factors for diabetes.[xii]

Because of chronic diseases, medications, decreases in food crop magnesium contents, and higher availability of refined and processed foods, the vast majority of people in modern societies are at risk for magnesium deficiency (often undiagnosed) and magnesium dietary supplementation is an easy and low cost way to lower the risks for a variety of heart diseases.[xiii]

In a meta-analysis of 532,979 participants from 19 studies, the greatest risk reduction for cardiovascular disease (CVD) occurred when magnesium intake increased from 150 to 400 milligrams (mg) per day.[xiv] In a meta-analysis of 48 genetic studies with a total of 60,801 coronary artery disease (CAD) cases and 123,504 non-cases, researchers found that serum magnesium levels are inversely associated with risk of heart disease.[xv]

Magnesium supplementation is also seen as a successful preventative mechanism (by improving lipid profiles, fasting glucose and blood pressure)[xvi] to heart disease complications (a leading cause of death from T2 diabetes).[xvii],[xviii]

In a 2018 study of obesity and diabetes of over 1,500 Mexican subjects, increased dietary magnesium reduced body mass index, waist circumference and serum glucose levels, and is likely to prevent co-morbidities.[xxi] High blood pressure is associated with vascular failure and can increase arterial stiffness.[xxii] In a 2016 randomized double-blind placebo-controlled study, a daily dose (350 mg) of magnesium decreased arterial stiffness in 52 obese and overweight subjects.[xxiii]

Obesity, inflammation, oxidative stress and insulin resistance are thought to be the common pathways to the overlap in high blood pressure and diabetes.[xxiv] Increasing magnesium intake has been shown to reduce C-reactive protein (CRP) levels, which indicate the amount of inflammation in the body,[xxv] among individuals with low-grade chronic systemic inflammation in a meta-analysis of 17 studies. Overall, a lower level of magnesium is seen in those having metabolic syndrome.[xxvi]

Magnesium is often called the "mind mineral," as it is abundant in the central nervous system and contributes to a balanced brain, influencing serotonin, dopamine and neuro-transmissions.[xxvii] Recent research has linked magnesium deficiency and low magnesium levels with many neurological disorders, such as cerebral vasospasm, Alzheimer's disease, Parkinson's disease, depression,[xxviii] stroke and migraine.[xxix] Daily consumption of 500 mg magnesium oxide tablets for over eight weeks by 30 depressed patients suffering from magnesium deficiency in 2017 led to significant improvements in depression status compared to the placebo group.[xxx]

A lower level of magnesium has been statistically associated with Alzheimer's disease.[xxxi],[xxxii] Higher magnesium intake showed neuroprotection and lower risk for Parkinson's disease in a study of 49 Japanese patients.[xxxiii] There is also strong evidence that magnesium deficiency is much more prevalent in migraine sufferers than in healthy controls[xxxiv] and oral magnesium could help to alleviate migraine symptoms.[xxxv]

Don't miss out on the health benefits of magnesium-rich foods (i.e., dark chocolate, nuts/seeds, leafy greens, legumes, fatty fish and whole grains) in your diet. Recent research has confirmed links between magnesium and diseases such as diabetes, heart disease, metabolic syndrome and neuro-related diseases, both as a preventative and a moderator for disease severity. You can find further scientific evidence at GreenMedInfo.com under magnesium and magnesium deficiency. 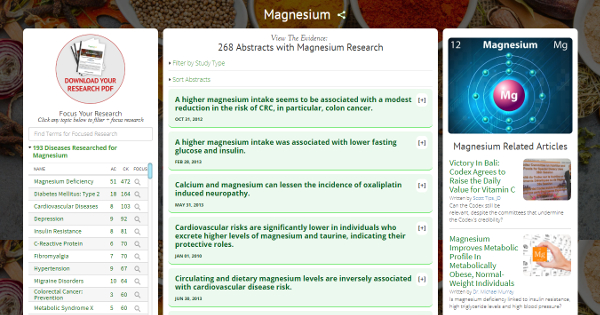 Also, if you are interested in going deeper down the rabbit hole into the topic, read Chapter 3 of Sayer Ji, founder of Greenmedinfo's new book REGENERATE, which discusses the role of magnesium-ATP chelate in producing a nano-particle accelerator type effect that has profound new implications for nutrition, biology, and medicine: The New Biophysics: A Deep Dive into the Quantum Rabbit Hole of Esoteric Physiology