Mangiferin: The Health-Boosting Antioxidant in Mangos 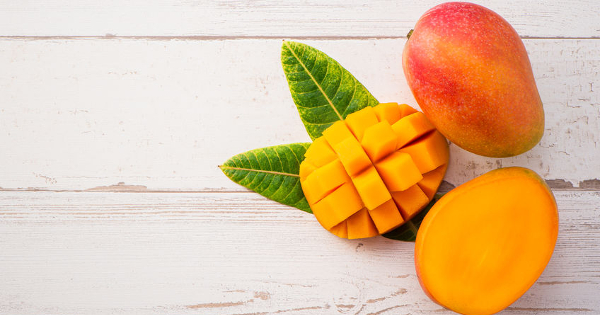 Mangiferin, a polyphenol found in mango fruit and plant extracts, possesses potent antioxidant and anti-inflammatory properties. Mangiferin has been shown to have beneficial effects on gastrointestinal health, Type 2 diabetes and cardiovascular health, and may have anticancer properties

Mango, a type of juicy stone fruit native to eastern Asia and India, is rich in omega-3 and omega-6 fatty acids, fiber, antioxidants, micronutrients and minerals, and a unique polyphenol called mangiferin.[i] While mango itself has long been touted for its health benefits, researchers are becoming increasingly interested in mangiferin, which can be found in the leaves, fruit, stone, kernel and stems of the mango plant.[ii]

Studies show that mangiferin extracts may have beneficial effects on lifestyle-related disorders and degenerative diseases, and researchers are eager to understand and utilize this potent polyphenol.

Antioxidant and Anti-Inflammatory Potential of Mangiferin

Mangiferin is a powerful antioxidant that modulates glucose metabolism and shows enhanced antioxidant capabilities in both inflammatory and pro-inflammatory conditions.[iii] Mangiferin antioxidants have also been shown to protect against liver damage and lower peroxidation in human peripheral blood lymphocytes, and mangiferin may have radioprotective properties thanks to its ability to suppress free radicals in cells.[iv],[v]

Additionally, mangiferin's anti-inflammatory benefits have been demonstrated in both the liver and heart, and researchers have discovered that mangiferin can protect against lipid peroxidation and oxidative stress by up-regulating the expression of Nrf2, a transcription factor responsible for the regulation of protective antioxidants and detoxification responses.[vi],[vii]

Mangiferin's anti-inflammatory effects have also been demonstrated in the lungs, where it can improve acute lung injury by reducing systemic and pulmonary inflammation responses.[viii]

More than 80% of all diabetes cases are Type 2, which is associated with a lowered ability to increase glucose utilization in skeletal muscle tissue and adipose tissue.[x] This decrease in glucose metabolism and increased insulin increases the risk for disorders like cardiovascular disease, fatty liver and renal diseases.[xi]

Mangiferin has gastroprotective effects, leading researchers to believe it could be a useful therapeutic measure against gastric complications including diarrhea, abdominal pain, weight loss and anemia associated with Crohn's disease and ulcerative colitis.[xiv]

These effects are likely due to mangiferin's antioxidant and anti-inflammatory properties, which both contribute to the development of gastrointestinal disorders.[xv] In other studies, researchers have found that mangiferin improves postoperative ileus, a short-term disturbance of gastrointestinal motility after surgery.[xvi]

Researchers believe that one root cause of carcinogenesis is oxidative stress and have long searched for natural, polyphenolic antioxidant compounds that could mediate oxidative damage in the body. One study found that mangiferin's antioxidant capabilities may stall the progression of carcinogenesis and induce apoptosis (cell death) on cancer cells.[xix]

Mangiferin is demonstrated to have protective effects against several cancers, including breast, colon, neural, skin and cervical cancers, by lowering oxidative stress and suppressing DNA damage in cells in various studies.[xx]

Mangiferin's strong immunomodulatory characteristics come from its ability to both reduce oxidative stress in lymphocytes, neutrophils and macrophages, and also enhance the number and activity of immune cells in your body.[xxi],[xxii]

Mangiferin may play a significant cardiovascular-protective role by decreasing fatty acids, cholesterol and triglycerides and decreasing the inflammatory process in heart tissue.[xxiv]

Mangiferin treatment is also shown to increase enzymatic activity and reduce the formation of lipid peroxides, which researchers use as a marker for cardiovascular disease risk and vascular cognitive impairment disorders.[xxv]

Given that mangiferin exhibits little to no toxicity and has anti-inflammatory and antioxidant benefits, there is strong evidence that mangiferin can be used as an alternative or preventive therapy against a variety of illnesses.[xxvi] However, it has a low water solubility and oral bioavailability and researchers must find an effective dosage and enhance its absorption rate before it can effectively be used in clinical settings.[xxvii]

For more information about mangiferin and to review other research being done on natural plant-based therapies, please visit the GreenMedInfo.com mangiferin research database. 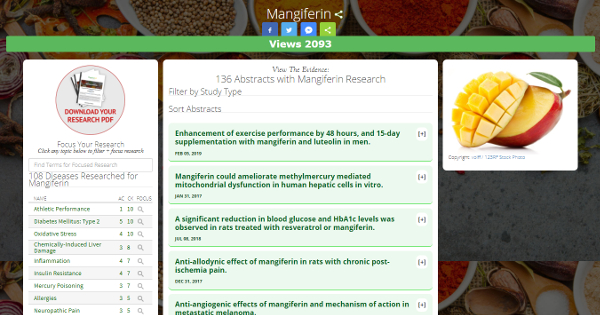 [i] Japan Journal of Medicine, Health Benefits of Mango and Mangiferin https://japanjournalofmedicine.com/health-benefits-of-mango-mangiferaindica-l-and-mangiferin/#Conclusion