"Mars Attack": Violation of Women By Care Providers At Birth 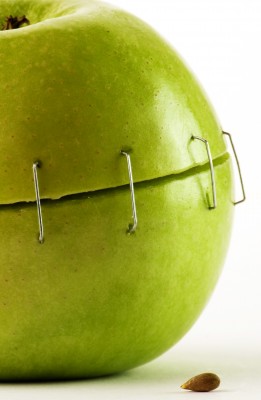 Abstract: "Mars Attack" is new term coined to describe unjustified violation of women by care providers at the time of birth, as well as the purposeful abandonment of the peer review system by major obstetric journals and the abandonment of the use of research evidence by ACOG in their latest protocols, in order to justify continued use of this form of violence against women.

Birth rape has existed since the mainstream of doctors aggressively and systematically began their attempt to eliminate the power of midwives to assist at births 250 years ago. This change in the nature of birth assistance is symbolized by the way forceps was promoted around 1750. It was kept as the secret trick that doctors had over midwives.(1). Only MDs were allowed to see or use a pair of forceps. This ploy marked the genesis of doctors asserting power over women’s bodies and turning women into passive objects at the time of birth.

The term "birth rape" has appeared in this magazine and on some blogs (2), but is not well-accepted. Although the word rape has been used to mean abusive treatment and violation in contexts that do not involve intercourse, such as a rape of justice or soldiers raping the countryside, the vast majority of people are offended by application of the word rape to a medical procedure.

It is well-accepted that rape is not a sexual act, but an assault in which one person asserts power over the other by means of penetration of the vagina. This is exactly what happens when vaginal exams are performed against a woman’s will or when an episiotomy is done against a woman’s will. However, coercing a woman to take Pitocin, or prohibiting her from walking, or surgically cutting before the anesthesia takes effect may be thought of as medical assault, rather than birth rape.

The situation is complicated by the fact that, in such cases, the woman comes of her own free will to the doctor, nurse or midwife for birth services and willingly pays them to carry out these procedures. In some cases, she may even have understood them beforehand to be part of the services provided. This contradicts the accepted meaning of rape, in which the woman is clear from the start that she doesn’t want her vagina touched by the rapist.

Because of the strong negative reactions that most people have to the term birth rape, I have coined a new term to describe violence and violation of women at birth. I call it "Mars Attack," after the movie by that name.

For those of you who haven’t seen the movie, the plot is simple: Martians arrive on Earth. They’re an advanced culture, judging by the high technology of their flying saucers, and therefore are assumed to be peaceful by nature. The aliens learn quickly that the word peace is valued in this Earth culture and repeat the same slogan over and over in English in their computer-generated alien voices: "We come in peace; we come in peace."

The President is excited by the possibility of bringing intergalactic peace and calls a special welcome session of the Congress to greet the Martians. The aliens march into Congress, repeating their wonderful optimistic slogan, "We come in peace; we come in peace," proceed to smile and then pull out their very advanced weapons and instantly kill every last member of Congress and all bystanders who don’t run away in time.

Mars Attack is similar to doctors’ violence against women at birth because the reason for its high incidence is not understood. Why did the Martians want to kill everyone on earth? It’s unclear.

When insulin was discovered in 1920, it was immediately applied to save the lives of millions. It wasn’t kept secret and sold in limited quantities to increase someone’s reputation or to pad the bank accounts of doctors over midwives like forceps were.

Although episiotomy was determined in 1960 to result in poorer outcomes than natural tears, episiotomy—which is nothing more than a medical term for female mutilation (3)—continues, with no medical justification, at rates of 50–90% of first births.

Not one piece of medical evidence shows hospital birth to be preferable to attended homebirth for low-risk women, yet homebirth continues to become less and less accessible. The influential American College of Obstetrics and Gynecology (ACOG) goes out of its way to repeatedly declare, contrary to all scientific evidence, that in every case, attended homebirth for low-risk women is dangerous.  It’s unclear what’s going on here. In every medical specialty other than obstetrics, the scientific method is applied to improve medical protocols.

If not always successful in the long term, cancer treatments closely follow the latest breakthroughs in science and are applied as quickly as money can be raised to pay for them. In the field of obstetrics, more expensive, less effective protocols are favored over cost-effective protocols that have better outcomes. When it comes to obstetrics, research-based evidence has been replaced by decision-based evidence making, i.e., published studies that draw conclusions unsupported by evidence provided in the article.

This year, I was involved in two cases of this myself. In one case, the British Journal of Obstetrics and Gynecology published a study that showed that previous c-section (CS) causes an increase in stillbirths in the subsequent pregnancy, but skewed the data to show that the increase was not statistically significant.(4) The published conclusion: "Previous CS does not cause stillbirth." Although they published my letter to the editor pointing out the obvious illogical conclusion of the paper (5), the conclusion still rests. No retraction was offered.

In the second example,  Obstetrics and Gynecology published a case study concluding that in one case the EPI-NO birth trainer caused a deadly air embolism.(6) The article presented no strong evidence that the woman suffered from an air embolism or that an EPI-NO was even used and made clear that if the EPI-NO was used, it was used in an unauthorized way that contradicts both the instructions and logic.

This is certainly a complicated playing field. Obstetric journals are lying to the public and then publishing letters to the editor that don’t appear on Medline or other research databases, thereby maintaining the false conclusions. Certainly not all doctors are Martians, but how can we distinguish which ones are, when they all say they come in peace to help us?

Birth and death are vulnerable times. It’s well-known that when you go to the funeral home, they’ll try to sell you the most expensive casket. Even if you fall for it, all you’ll lose is money. You won’t have an infected episiotomy with an antibiotic-resistance bacteria that might kill you or undergo dangerous abdominal surgery, with all its repercussions, for no reason.

Birth is a powerful time. Having a baby opens something inside of you. It’s ancient and animal. No matter how ready you are for it, it’s a surprise. A woman usually needs good support; but good support is hard to find. Most women no longer have extended family nearby.

Right inside the delivery room are Martians who stand ready to attack. They come with a friendly façade. They are technologically advanced and use scientific journals to pretend academic authority. They use their weapons to convince vulnerable women that they are acting in their best interests. They present themselves as kind health professionals, they get paid for entering your body and then they leave you emotionally dead and scarred for life. Why do they attack?

We don’t know. In the movie, Martians attack our planet and devastate everything because it's fun. They enjoy killing people and destroying buildings; they even play bowling with famous statues and pose for photos in front of temples before they blow them up. No one has a conclusive theory for current labor and delivery practice in America. The theory that it’s fun is just as good as any other theory. In 1750, no malpractice lawsuits were being filed, so avoiding law suits wasn’t the reason that doctors refused to share their forceps invention with midwives.

Will somebody find a way to stop the Martians or will everyone die in the war with these short, big-brained aliens? Thank goodness for Midwifery Today, fortifying women in its quiet way against Mars Attacks.

2. Feministe. Medical Rape and the Medicalization of Childbirth.  www.feministe.us/blog/archives/2008/06/19/medical-rape-and-the-medicalization-of-childbirth/

5. "First comment on Woods 2008: 'The risk of unexplained antepartum stillbirth in second pregnancies following cesarean section in the first pregnancy.'" BJOG In press.

Judy Slome Cohain is a masters degree certified licensed nurse midwife in the US who has been living and working in Israel since 1983. She practices evidence-based midwifery. Judy welcomes feedback or questions which can be sent to  [email protected]