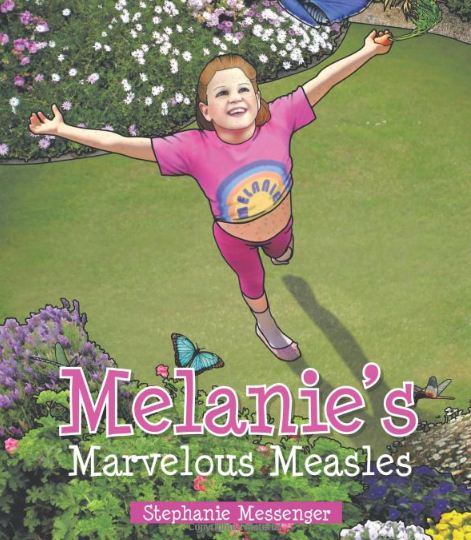 There is a new children's book available that teaches children that they don't have to fear childhood illnesses. It is entitled "Melanie's Marvelous Measles" and can be purchased HERE

Mass hysteria has broken out among the provaccine with ideations of banning the book due to its perceived danger. See article HERE

So what are the arguments in favor of shedding the mass fear that has been ingrained since the 1960s when the vaccines became available, prior to which measles was an acceptable childhood illness? In the developed world, mortality was reduced over 98% before the vaccine came along and before antibiotics were available. In England and in the United States, the chance of dying from measles had dropped to 1-2% by the 1930s.[1]

Immunology textbooks[2] point out that children who can't make antibodies, usually get through measles as well as children who can, because it's the innate or cellular immune system that is the key for measles (or any first time disease for that matter) not the humoral or the antibody system.

One of the most disconcerting discoveries in clinical medicine was the finding that children with congenital agammaglobulinaemia, who could make no antibody and had only insignificant traces of immunoglobulin in circulation, contracted measles in normal fashion, showed the usual sequence of symptoms and signs, and were subsequently immune. No measles anti-body was detectable in their serum (the water part of blood minus clotting factors and cells).[3]

The cellular immune system is dependent on good nutrition for optimal functioning. Bad nutrition comes in two forms: Plenty of food but all empty calories or not enough food of any calories at all. In the United States, studies have found that vitamin A deficiency is not just a thing of the past, but that even children with normal diets were vitamin-deficient upon measles infection. This 1992 study in California children showed that 50% of hospitalized measles cases had vitamin A deficiency. But there was also vitamin A deficiency in 30% of the sick controls who did not have measles. None of the uninfected controls showed significant deficiency.

We studied 20 children with measles in Long Beach, Calif., and found that 50% were vitamin A deficient. This frequency among presumably well nourished American children supports evaluation of vitamin A status as a part of acute management of measles in the United States.[4]

So we could say that any child that lands up in a hospital in USA, or any developed country is suffering because their parents need educating about proper nutrition, or because their doctor is totally clueless about the nearly 80 years of proven benefit of vitamin A supplementation in acute measles.

Previous studies have shown excess mortality and immune abnormalities among girls immunized with high titer measles vaccine 2 to 4 years after immunization. . . our results showed that serum vitamin A concentrations were de-pressed after measles vaccination, irrespective of whether it was the monvalent or combined measles vaccine. [5]

In parts of Africa, measles rampages precisely because there is no nutrition worth talking about. Are vaccines the answer?

And, measles infections can be beneficial. Dr. Peter Aaby et al. and his team found that children who survived natural measles had a much higher survival rate from all other infectious causes than other children. Children who had had the measles vaccine, had a lower rate of survival and the worst group in terms of overall survival from infections, was the group which had neither measles vaccines nor measles disease. That's published research.[6] Their compromise conclusion was that it would be necessary to use the measles vaccine forever, because of the value of the vaccine in protecting against all cause mortality in the absence of actual infection.

Obviously, no research has been done in the developed world to see if there is a parallel here. Indeed, the ONLY reason that discovery was made in developing countries was because the high titer Edmonston measles vaccines (subsequently abandoned) resulted in excess all cause mortality, and they wanted to find out why. Had not that disaster occurred, they might never have discovered that measles infection actually reduced all cause mortality in the real world and that it's something worth having.

Therefore it could be said that measles does something worthwhile.

Now, back to the book under attack.

"Here's how to turn a children's book into a hysterical controversy. Just declare any positive discussion of the benefits of childhood illness to be so evil that censorship is the only possible response. As a librarian, I'm shocked to find so-called "skeptics" advocating book banning. Why do they think this book has to be banned? Because the book in question tells the story of a little girl experiencing a mild case of measles. Here is an excellent review by PhD Immunologist, Dr. Tetyana Obukhanych, which gives a carefully referenced overview of measles and backs up Melanie's Marvelous Measles with the scientific facts."
~ "O" of inside vaccines

Dr. Suzanne Humphries is a conventionally educated medical doctor who has taken the walk into, around, and out of the allopathic paradigm. She fully and successfully participated in the conventional system for 19 years, witnessing first-hand how that approach fails patients and creates new disease time and again. Prior to medical school, she earned a bachelor’s degree in physics from Rutgers University.

Dr. Humphries is on the board of directors of the International Medical Council on Vaccination. She lives in Maine, USA.