Views 4855
Posted on:
Friday, July 31st 2015 at 5:15 am
Written By:
Margie King, Health Coach
This article is copyrighted by GreenMedInfo LLC, 2015
Visit our Re-post guidelines 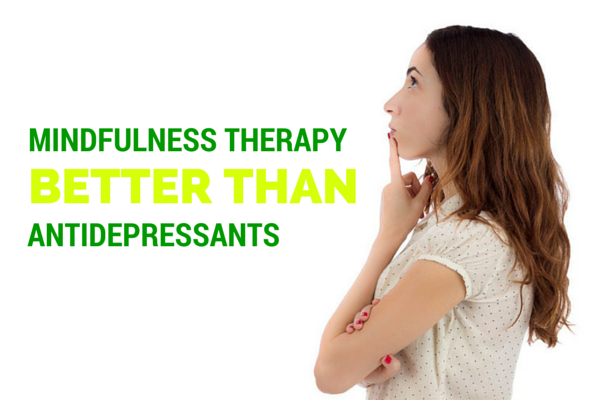 Antidepressants are big business.  But for the same money, and without the side effects, a little mindfulness can do the same job.

Depression is one of the most common forms of mental illness.  It affects more than 350 million people worldwide. The World Health Organization ranks it as the leading cause of disability globally.

That makes for a profitable niche for the drug companies. A report from the National Center for Health Statistics found that U.S. antidepressant use shot up by nearly 400 percent between 1988 and 2008.[i]

But a new study from the University of Exeter in the UK suggests that mindfulness-based cognitive therapy (MBCT) is just as good as drugs – and maybe even better.[ii]

MBCT is a structured training program for the mind and body.  It was developed to help people deal with repeated bouts of depression.  It teaches them skills to recognize and respond constructively to the thoughts and feelings associated with relapse.  In other words, it helps patients re-focus their thoughts as a way to avoid falling back into depression.

Prior studies have shown that MBCT reduces the risk of relapse or recurrence of depression by about 34% compared to usual care or placebo.[iii]  But MBCT had not been compared to drugs.

The research published in The Lancet medical journal was the first ever large study to compare MBCT with antidepressants for reducing the risk of relapse in depression.

The researchers followed a group of 424 depressed patients for two years. The patients had all suffered three or more previous major depressive episodes.  And they were all taking a maintenance course of antidepressants.

Most depression is recurrent.  Without treatment the researchers estimated that 50% to 80% of people relapse.  The most common treatment to avoid recurrence is a minimum two-year course of antidepressants.

In the study, patients were randomly assigned to either continue on their drugs or to learn MBCT while coming slowly off their medication.

The MBCT group attended eight group therapy sessions in which they learned mindfulness practices and cognitive-behavioral skills, and participated in group discussions.  They also practiced MBCT through homework assignments.  And they were offered four optional refresher sessions every 3 months for a year.

After two years, relapse rates were worse in the drug group.  The drug group relapsed at the rate of 47% compared to only 44% for the mindfulness group.

The researchers did not believe the difference between the two treatments was statistically significant.  They would not conclude that MBCT was better than the drugs.  But they did note that many people are unable to stay on antidepressants. And many don't want to remain on drugs for indefinite periods, or can't tolerate their side effects.  Antidepressants are known to cause weight gain, nausea, sexual dysfunction, insomnia, dizziness, anxiety, and more.

The researchers concluded that MBCT may be an effective alternative to antidepressants for prevention of depressive relapse with no significant difference in cost. And it may be a good alternative for people who choose not to use drugs.

But they also suggested MBCT was more beneficial than drugs in preventing relapses in patients who were at highest risk of relapse especially those who reported severe childhood abuse.

Mindfulness therapies have also been successfully used in:

For an extensive list of natural anti-depressive agents take a look at GreenMedInfo.com's depression page. Or, read a summary article titled, 23 Natural Alternatives for Depression.

Also, register for the upcoming Mental Health Wellness Summit. This event is free and features some of the world's most passionate and knowledgeable experts on addressing mental health issues naturally. Register to save your spot here.