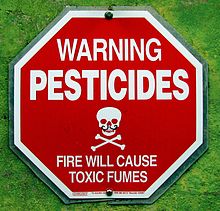 In a disturbing study published in the Journal of Toxicology in Vitro, researchers found that Monsanto's popular "weed killer" known as Roundup, which has already been linked to over 25 adverse health effects, is also capable of interfering with and/or harming the male reproductive system.

Researchers tested Roundup, a glyphosate-based herbicide, on mature rat testicular cells at a concentration range between 1 and 10,000 ppm, which they described as "the range in some human urine and in environment to agricultural levels." They found that within 1 to 48 hours of Roundup exposure testicular (Leydig) cells were damaged or killed.

What is more disturbing is that even at a lower, presumably "non toxic" concentration of 1 ppm of Roundup, or glyphosate by itself, testosterone concentrations were observed to decrease by 35%.

Keep in mind that 1 ppm of Roundup is an infinitesimal concentration. Distilled water, as a reference point, contains between 5-10 ppm of dissolved solids. How can such a small concentration of Roundup/glyphosate cause such a profound disruption of biological activity in testicular cells? The phenomenon is known as endocrine disruption.

Endocrine disruptors are chemicals that interfere with the "synthesis, secretion, transport, binding, action, or elimination of natural hormones in the body that are responsible for development, behavior, fertility, and maintenance of homeostasis (normal cell metabolism)," and are capable of interfering with hormonal health even in minute concentrations.

Whereas a higher concentration of Roundup might result in immediate cell death, a much lower one can alter the hormonal and genetic expression of that cell, perhaps taking it down the path towards pathological dysfunction, or even cancer.

There are already 16 studies in the biomedical literature indicating that glyphosate acts an an endocrine disruptor, with a 2010 paper revealing that prepubertal exposure to commercial formulation of the herbicide glyphosate alters testosterone levels and testicular morphology. Also, cell research from 2009 indicates that concentrations of glyphosate as low as 500 parts per billion may disrupt endocrine function, underscoring just serious the problem of low-dose exposure really is.

Ultimately, the connection between Roundup/glyphosate and endocrine disruption is not simply theoretical. Most of us in the industrialized world are already being exposed to significant concentrations in our air, rain, drinking water and food. Mass herbicide exposure is just one form of fall-out from what is perhaps the largest example of mass human experimentation ever conducted: the global co-option of the world's food supply (and modes of food production) by chemical and biotech companies. We did not give our consent to this experiment, nor were we fully informed -- glaring evidence that our human rights were violated.

Only through raising awareness will we be able to turn the tide against the ceaseless chemical and biological assault against our health articulated through companies like Monsanto and Dow AgroScience.