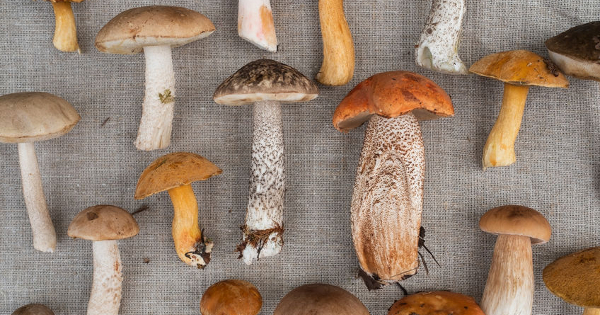 Mushrooms have recently gained popularity in culinary circles, but their far-reaching therapeutic properties should get your attention for a longer and healthier life

Although mushrooms have been part of the healer's toolbox since ancient times, the medicinal power of mushrooms is gaining momentum in evidence-based journals.

Medicinal mushrooms come in a wide variety and shapes such as white button, reishi, maitake, shiitake, oyster, cordyceps, cauliflower, tiger tail and lion's mane, and most have health benefits that range from fighting cancer and boosting your immunity and memory to preventing diseases like diabetes and arthritis.

Reishi (in Japanese) or lingzhi (in Chinese) mushrooms are well known in Asia for their anticancer properties. In a meta-analysis by scientists of 23 trials involving 4,246 cancer patients, reishi mushrooms enhanced longevity and quality of life in cancer patients.[i]

Polysaccharides from Cordyceps cicadae mushrooms inhibited the growth of cancer cells and induced cancer cell deaths showing its effectiveness as a low cost and safe treatment for cervical cancer.[iii]

A peptide from the shiitake mushroom showed promising results in growth arrest, cell death and cleaning out damaged cells in a breast cancer in vitro study.[iv] In both in vitro and in vivo studies, results showed that mice with induced testicular cancer treated with the Cordyceps sinensis mushroom had significantly smaller and fewer tumors than the control group.[v]

In a clinical study of 105 cancer patients undergoing chemotherapy or radiation treatments, a combination of reishi mushroom extract and geraniums improved immunity and fought the cancer and secondary infections that could have compromised treatment and health.[x]

In a study of 18 patients diagnosed with low and intermediate myelodysplastic syndrome, which can lead to leukemia if not managed well, maitake mushroom extract treatment of three milligrams (mg) twice a day for 12 weeks increased immunity, positively affecting neutrophil, monocyte and free radical production.[xi]

In a clinical study of asymptomatic children from 3 to 5 years old, treatment with beta glucans from reishi mushrooms showed increased immune system cells in the peripheral blood -- signaling a strong defense against childhood infections.[xii]

Polysaccharide beta glucan extracted from reishi mushroom was shown to be a powerful antioxidant in 37 high risk and 34 stable angina patients; those who were treated with 750 mg per day for three months had significantly decreased oxidative radicals and improved progression of atherosclerosis.[xiv]

In a study of 42 healthy subjects, another intervention with beta glucan from reishi mushrooms of 225 mg per day for three months demonstrated its antioxidative effects -- enhanced total antioxidant capacity and enzyme activities as well as reduced mild fatty liver condition to normal by suppressing oxidative stress were observed.[xv]

Crohn's disease is a chronic inflammatory disease of the gastrointestinal tract. Treatment with a triterpene compound from reishi mushrooms showed that the inflammatory cytokines were significantly inhibited in a study of children with Crohn's disease.[xvi]

Sixty patients with moderate persistent asthma were studied and those who took the cordyceps sinensis mushroom capsule for two months had reduced airway inflammation caused by their chronic asthma.[xvii] Cordycepin from medicinal mushrooms showed strong effects on many anti-inflammatory diseases.[xviii]

In a study of 32 patients with active rheumatoid arthritis, supplementation of medicinal mushroom and Chinese herbs -- reishi (4 grams) and San Miao San (2.4 grams) daily -- lowered arthritic pain for patients.[xix] The data in a mice study support a model where white button mushrooms regulate immunity in vitro and protect the colon from inflammation-induced injuries in vivo.[xx]

The brain is susceptible to inflammation as well. In an Alzheimer's disease model of rats, treatment with medicinal mushroom extracts delayed disease progression, improved learning and memory functions and stopped neural cell deaths and brain atrophy.[xxi]

Lion's mane mushrooms were supplemented for 12 weeks and were effective in preventing dementia and cognitive decline.[xxiv] Lion's mane supplementation for four weeks in a study of 30 females also reduced depression and anxiety.[xxv]

Dyslipidemia, high blood cholesterol and triglycerides is often a harbinger of future diabetes. In a rat model, white button mushrooms and a probiotic were found to lower dyslipidemia and decrease oxidative stress.[xxvi] In a study of 89 diabetic patients, oyster mushroom consumption significantly reduced blood glucose, blood pressure, triglycerides and cholesterol without ill effects on the liver or kidneys.[xxvii]

Mushrooms and Their Medicinal Powers

Medicinal mushrooms are widely researched and used as treatment in the prevention and progression of many diseases from cancer and asthma to diabetes and dementia. Mushrooms protect you due to their anti-inflammatory, antitumor, antidiabetic, immune boosting and antioxidant activities. To learn more, see GreenMedInfo.com's database on mushrooms. 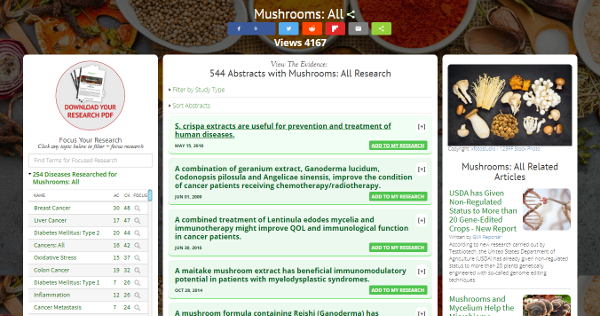