Niacin for Detoxification: A Little-known Therapeutic Use 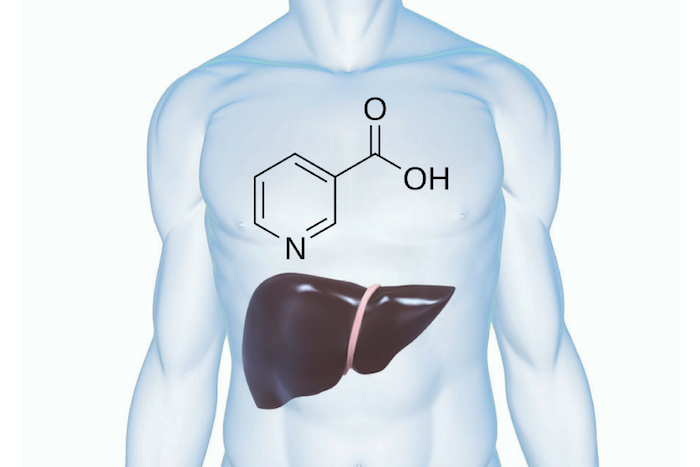 Republished with permission from the Journal of Orthomolecular Medicine, Volume 26, Number 2, 2011

Niacin (nicotinic acid) has a number of well-established clinical uses and the potential for additional clinical applications. To date, its therapeutic application for enhancing detoxification has not been systematically reviewed. The use of niacin for the purpose of enhancing detoxification was popularized by L. Ron Hubbard (i.e., the founder of the Church of Scientology) in 1977. He developed a comprehensive detoxification method using niacin and other treatments to remove lipid-stored xenobiotics. Niacin is also used among individuals attempting to mask urine drug screens; presumably, a result of its favorable therapeutic effect upon liver detoxification. All published reports using niacin as part of a detoxification regimen are summarized in this manuscript, along with several reports of attempts to misuse niacin to mask urine drug testing. The results demonstrate that niacin, as a component of the Hubbard regimen, does augment detoxification by lowering the body burden of lipid-stored xenobiotics. With respect to niacin’s role in masking the results of urine drug testing, the data from several published reports have not shown niacin to be capable of this.

Niacin (nicotinic acid) has a number of well-established clinical uses and the potential for additional clinical applications. This was recently the subject of a comprehensive review by this author in a collaborative paper, “Pharmacologic Use of Niacin.”1 While numerous medical conditions (e.g., arthritis, cancer, depression, dyslipidemia, migraine and tension-type headaches, pellagra, and schizophrenia) potentially benefit from niacin supplementation, its therapeutic application for enhancing detoxification has not been systematically reviewed.

The use of niacin for the purpose of enhancing detoxification was popularized by L. Ron Hubbard (i.e., the founder of the Church of Scientology) in 1977. He developed a comprehensive detoxification method using niacin and other treatments, which he referred to as “The Sweat Program” to rid the body of fatty residues of d-lysergic acid diethylamide.2 Because this regimen took many months to complete, Hubbard’s detoxification method was refined to produce quicker results in treatment duration of about 2-4 weeks. The Hubbard regimen has evolved into a comprehensive treatment that removes lipid-stored xenobiotics containing illegal drugs (e.g., cocaine, heroine, and marijuana), legal drugs (e.g., aspirin and codeine), and chemicals used in the commercial, agricultural, and industrial industries. The current Hubbard regimen consists of aerobic exercise, prescribed sauna therapy, dietary modifications, general vitamin and mineral supplementation, polyunsaturated oils supplementation, and niacin. The overarching mechanism of action of the Hubbard regimen is to enhance extra-renal excretion by sweat or sebum, and to reduce problematic clinical manifestations believed to be associated with lipid-stored xenobiotics.

Niacin is also used among individuals attempting to mask urine drug screens; presumably, a result of its favorable therapeutic effect upon liver detoxification. A simple search on Google using the terms, “niacin” and “masking urine drug testing,” resulted in 911,000 links (on May 12, 2011). In their editorial on the subject, Heard and Mendoza delineate their concerns, including potential toxicities, when niacin is used for the purposes of masking urine drug screens.3

This article will focus on published studies and reports describing the use niacin for stimulating detoxification, and on attempts to misuse niacin to mask urine drug testing. The findings will be summarized in tabular form.

A search for articles describing the uses of niacin for detoxification and masking urine drug screens was undertaken. To be included in the final review the articles had to (1) report on the use of niacin for detoxification, or for masking urine drug screens, either alone or in combination with other medicines; and (2) describe the method of administration. A hand search was also conducted for articles not indexed in databases, such as Medline. Twelve articles were found to meet the inclusion criteria and were included in this review.4-15 Nine articles reported on the benefits of niacin as part of a detoxification program to eliminate fat-stored xenobiotics.4-12 Three articles reported on the misuses of niacin to mask the results of urine drug testing.13-15

The number of published reports is insufficient to warrant a meta-analysis. As such, all published reports using niacin as part of a detoxification regimen, and to mask the results of urine drug testing, are summarized in Tables 1 and 2 (p.89-92).

The results of this review demonstrate that niacin, as a component of the Hubbard regimen, does augment detoxification by lowering the body burden of lipid-stored xenobiotics. The daily doses of niacin used during treatment were not typically reported in the summarized studies. In one study, the range used on adults was 800-6,800 mg/day (average being 3,285 mg/day) during treatment.4 For a child in one of the reported studies, the dose of niacin used during treatment was 25-212 mg/day.10 While the precise mechanism of action that niacin has upon liver detoxification has yet to be elucidated, several possibilities do exist. Niacin might facilitate the elimination of lipid-stored xenobiotics as a result of its therapeutic effect upon free fatty acids. The initial reductions in liver-mobilized free fatty acids from taking niacin are followed by short-lived increases in the release of free fatty acids from the liver.16,17 When niacin is combined with other therapies that facilitate extra-renal excretion (as in the Hubbard regimen), the niacin-induced release of free fatty acids might, therefore, liberate lipid-stored xenobiotics from the liver and allow their removal through the skin.

Niacin supplementation also increases the production of nicotinamide adenine dinucleotide phosphate (NADPH), which supports both phase I and II detoxification (i.e., biotransformation) pathways within the liver.18 The phase I pathway is composed mainly of the cytochrome P450 (CYP450) supergene family of enzymes, and is by and large the first enzymatic defense against foreign compounds.19 NADPH serves as the main donor of reducing equivalents in xenobiotic oxidations by the CYP450 system, and therefore serves a vital role in the phase I pathway.18,19 NADPH also supports the glutathione redox cycle within the liver. This has a net effect of maintaining a negative redox potential of glutathione, permitting its phase II functions to occur.18 The phase II pathway essentially transforms a xenobiotic into a water-soluble compound that can be excreted through the urine or bile.19 Impaired detoxification is associated with diseases, such as Parkinson’s disease, fibromyalgia, and chronic fatigue/immune dysfunction.19 One of the advantages of the Hubbard regimen (as reported in many of the cited publications) was an improvement, and sometimes complete clearing of chronic symptoms reflective of xenobiotic burden. The evidence therefore seems to support niacin’s therapeutic role, and the other treatments of the Hubbard regimen, in normalizing or perhaps optimizing the detoxification pathways in the liver.

Outside of liver detoxification, the cutaneous skin reactions produced by niacin likely contribute to the removal of lipid- stored xenobiotics. Niacin causes peripheral vasodilatation and cutaneous flushing by inducing the production of prostaglandin D2 (PGD2) in the skin, leading to a marked increase of its metabolite, 9α, 11β-PGF2, in the plasma.20 When niacin is administered orally in amounts of 500 mg or topically via a 6-inch patch of 10-1 M aqueous methyl-nicotinate on the forearm, PGD2 is markedly released in the skin and its metabolite appears in high amounts in the plasma.20,21 With increased peripheral vasodilatation, there would presumably be increased blood flow to the skin. When niacin is therefore combined with the other treatments in the Hubbard regimen, there would be enhanced diaphoresis and removal of lipid-stored xenobiotics through the skin or sebum.

With respect to niacin’s role in masking the results of urine drug testing, the data from several published reports have not shown niacin to be capable of this. Not one individual has been able to “fool” urine drug testing by taking niacin. The only unfortunate outcome has been adverse drug reaction reports since the cutaneous flushing and peripheral vasodilatation that result from niacin require proper education and guidance prior to use. When individuals take niacin without proper instruction, they and their unknowing clinicians believe these overt reactions to be evidence of serious adverse drug reactions.

First-time users of niacin typically experience marked skin warming (the medically- harmless niacin flush) which can last for 30 to 60 minutes and seem unpleasant, surpris- ing and even unsettling to the point that people may think they are having a severe al- lergic reaction. e take home message here is simple: niacin cannot mask the results of urine drug testing, but it can easily lead indi- viduals to seek emergency care for cutaneous reactions that are normally self-limiting and without serious clinical consequences.

Published reports about using niacin as part of the Hubbard regimen suggest that therapeutic doses of niacin can facilitate detoxification by reducing the burden of lipid- stored xenobiotics. Three reports have not shown niacin to be capable of masking the results of urine drug testing. Niacin might help to remove lipid-stored xenobiotics by inducing the release of free fatty acids from the liver, by supporting phase I and II detoxification pathways, and/or by cutaneous reactions and peripheral vasodilatation that increase diaphoresis. Future analysis and research into the capabilities of niacin to enhance the body’s detoxification capabilities may clarify niacin’s mechanism of action and encourage the further refinement of detoxification protocols.

To learn more about the role of niacin in preventing and treating health conditions explore the primary literature on the topic on the GreenMedInfo Niacin Research database.

Republished from the Journal of Orthomolecular Medicine, Volume 26, Number 2, 2011