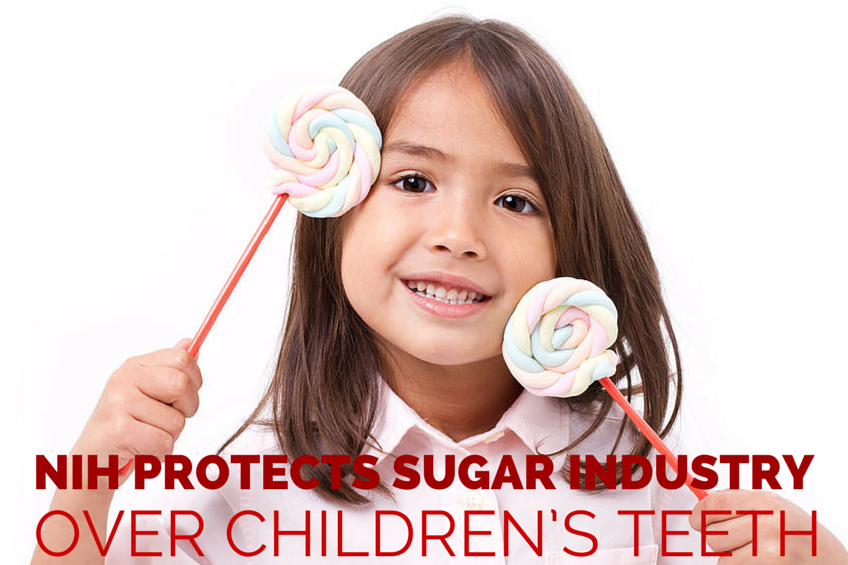 The government has gone to great lengths to downplay the connection between sugar and tooth decay. The result has been more profits for the sugar industry and more cavities for kids.

In the 1950s any six-year-old could tell you candy and soda cause cavities.  Yet for decades the government has gone to great lengths to downplay the connection between sugar and tooth decay. The result has been more profits for the sugar industry and more cavities for kids.

A study published in the journal PLoS Medicine examined internal cane and beet sugar industry documents from 1959 to 1971.[i]  Researchers from the University of California San Francisco (UCSF) show that the sugar industry successfully manipulated the National Institutes of Health (NIH) to conduct research on dental caries designed to protect the industry's financial interests.

In 1966 President Johnson declared war on cavities.  The objective was for the U.S. National Institute of Dental Research (NIDR), a branch of the NIH, to start an accelerated 10-year research program that would result in the virtual eradication of dental caries.  It was called the National Caries Program (NCP).

Common sense would lead you to believe that the first step in preventing tooth decay would be to reduce the amount of sugary foods kids eat.  According to the researchers, as early as 1950 even the sugar industry trade organization representing 30 international members accepted the fact that sugar caused tooth decay.  But reducing sugar intake was not in the best financial interests of the industry.

Instead, the sugar documents show that the industry influenced the NIH to move away from any talk of reducing sugar intake and instead focus on a "cure" for tooth decay that didn't involve children eating less sugar.

The strategy is the same one that lets the food industry avoid taking responsibility for the obesity epidemic.  The industry points the finger at lack of physical activity rather than the quality and quantity of food eaten by America's children.  And the food industry has co-opted the government to get their agenda written into dietary and exercise guidelines and weight reduction recommendations.

In 1969 the NIH basically threw in the towel on sugar reduction.  It concluded that reducing sugar consumption was theoretically possible but not practical as a public health measure.  Instead in 1971 they adopted 78% of the sugar industry's research recommendations. Research that could have been harmful to sugar industry interests was omitted.

The sugar industry encouraged the NIH to design research projects that, instead of looking at sugar, focused on:

For the next decade the government funded tooth decay research that would not harm the sugar industry. The deflection strategy included shifting public attention away from reducing sugar consumption to "funding research in collaboration with allied food industries on enzymes to break up dental plaque and a vaccine against tooth decay with questionable potential for widespread application." According to the authors of the UCSF study, the majority of that research failed to significantly reduce the rates of tooth decay. In particular, fluoride has not resulted in lower tooth decay rates.

On the contrary, today the CDC calls tooth decay the leading chronic disease among U.S. children. The CDC estimates that more than half of American children and teens have cavities in their adult teeth. About 42% of children in the US have some decay in their baby (primary) teeth. And 15.6 % of children age 6 to 19 have untreated tooth decay, which can lead to tooth loss, dangerous mercury fillings, infections and abscesses.

According to the researchers, tooth decay occurs when the hard enamel covering the tooth surface is damaged by acid produced by bacteria in the mouth. Sugary foods and drink cause bacteria to form dextrans, sticky molecules that cause the bacteria to adhere to one another in the plaque and on the tooth's surface. The stickiness of the plaque keeps the acids in contact with the teeth damaging the enamel.

Today the sugar industry is again threatened.  In 2014 the World Health Organization (WHO) proposed guidelines on sugar consumption.  They recommend limiting daily consumption of added sugars to 10% or less of total calories.  And the U.S. Food and Drug Administration proposed changes to the nutrition facts panel in 2014 on packaged foods to disclose added sugars.

Not surprisingly, the World Sugar Research Organisation, a trade organization, is challenging these proposals.  Just as they have since the 1950s, the sugar industry is arguing that public health interventions should focus on reducing the harms of sugar consumption – but not sugar consumption itself.

In 1996, the FDA began allowing health claims (e.g., "does not promote tooth decay") on foods containing sugar substitutes. But the FDA has never required disclosure or labeling of carbohydrates or sugary foods that lead to cavities.

The UCSF researchers compare the National Caries Program to the government's Smoking and Health Program that focused on reducing the harm from cigarettes and developing a "safe cigarette" rather than encouraging smoking cessation programs.

Agencies like the NIH are supposed to conduct research in the public interest.  But for more than 60 years the NIH has protected the sugar industry.  At the same time government policies support sugar production and pricing.

The result hasn't just been tooth decay.  Excess dietary sugar has also been linked to heart disease, diabetes, liver disease, and cancer. It's time for government agencies to stand up to the sugar industry and stand up for the public's health.