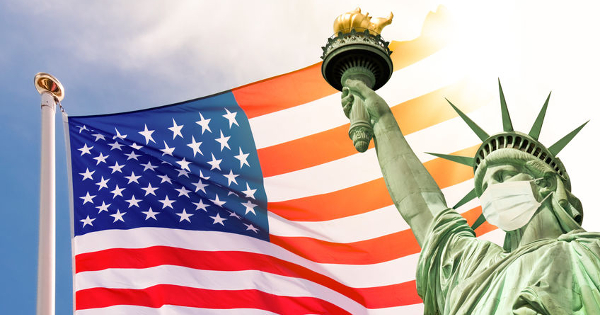 There is a lot of attention and fear expressed online recently about a New York bill, Assembly Bill A416, that gives the Governor sweeping power to arrest and imprison people thought to be infected with a communicable disease, or even for the possibility of coming into contact with someone who might have a communicable disease. There are rumors that there will be a vote on the bill on January 6, and some people are terrified.

This is a horrible bill, which we will detail below, but right now it is not an imminent threat and will not be voted on January 6.

Since Senate Bill S7919 was passed last March the Governor has had the power to rule by decree, suspend any law, and do anything he thinks is needed to deal with Covid-19. Right now, he doesn't need A416, he can already arrest people and throw them in camps. And he will have that power until April 30 when these extraordinary powers lapse. A416 would give the Governor the permanent authority to invoke these police state powers in response to any "public health emergency", and he decides what is a "public health emergency."

In the last session the bill was called A99. A "session" is the two-year period in between elections for the legislature. When a new session starts following an election, all the old bills die. But they can be re-introduced as a new bill, and they get new identifying numbers. This bill was just re-introduced and is now Assembly Bill A416.

This is the fourth time Assemblymember N. Nick Perry (D-Flatbush) has introduced this bill. None of Perry's colleagues have ever signed on as a co-sponsor. And there is currently no identical bill in the State Senate, known as a "same as," and no Senator has ever introduced a "same as." That means A416 is what is called a "one house bill." One house bills do not receive much attention from legislators because they simply cannot pass, and scarce time and resources are devoted to passable bills.

There is no chance that the Assembly will vote on the bill on January 6 as some reports have claimed. January 6 is the first day of the 2021 legislative session. The date "January 6, 2021" appears on the bill because Perry "pre-filed" the bill before the legislative session officially started, and all pre-filed bills are dated with the first day of the session.

Does that all mean we have nothing to worry about? No, we need to continue to monitor this bill closely as we have done for the past 6 years. And you need to let your Assemblymember know that you do not want him or her to support this bill in anyway.

Click here Take Action  to send emails to your Assemblymember expressing your opposition. But before you do that if you value the news, information and advocacy provided to you by the Autism Action Network please make it possible for by donating here: https://grouprev.com/autismcommunitywalk2020-AutismActionNetwork

The name and phone numbers of your Assemblymember should appear below. Please call your Assemblymember and let the staffer know politely that you want him or her to oppose this bill or any other similar bill that gives extraordinary powers to the Governor.

Governor Cuomo has been irresponsible and capricious in his exercise of the extraordinary powers he was given last March. Consider his catastrophic decision to force nursing homes to put people with active Covid-19 among uninfected residents. The result was well over ten thousand avoidable deaths. We don't know the entire scope of the catastrophe because Cuomo refuses to release the number of nursing home residents who died at hospitals. His approach to business and school closures seems to change with his mood. And the US Supreme Court recently held that Cuomo's closure of houses of worship, "strike at the very heart of the First Amendment's guarantee of religious liberty."

A416 allows the Governor to declare a public health emergency and arrest and detain "a case,  contact  or  carrier,  or suspected  case, contact or carrier of a contagious disease". A "suspected contact" means everyone.

Entire "groups" can be detained, since specifically identifying individuals is not required. What is a "group"? All residents of a specific area? Everyone who is HIV positive? Members of a religious group? Pregnant women? The language is so vague that group could include any collection of people with some common characteristic.

A416 allows for forced medical treatment for detained persons including vaccination.

The conditions for releasing people from detention are written so broadly that it essentially gives the State and the Governor the power to hold people as long as they want. After three days of detention, if a detainee requests release, the State would be required to get a court order to continue holding the person. The court order would need renewal every 90 days. Does anyone believe the Governor would not get complete cooperation from judges beholden to him?

A416 would void fundamental human and constitutionally guaranteed rights, and limits on the power of the State. At a minimum, A416 would deprive people of their Fourth Amendment right "to be secure in their persons, houses, papers, and effects, against unreasonable searches and seizures," and our Fifth Amendment right to not "be deprived of life, liberty, or property, without due process of law."

Again, the US Supreme Court has already addressed address Cuomo's abuse of his existing authority and held, "Even in a pandemic, the constitution cannot be put away and forgotten."

New York's Governor is already abusing and misusing the extraordinary powers he currently has. And these powers should be suspended as soon as possible. The last thing New Yorkers need is for the Governor to have these powers on a permanent basis.

Pleases share this message with friends and family, and please share on social networks while we still can.

Call to action for those NOT living in New York state!

Draconian legislation like this will likely be seen in other states this year. You can act now to protect your health rights and stand against mandatory COVID-19 vaccines in your state by using the Stand For Health Freedom online action platform, which enables anyone in one of the 50 US states to look up and contact their governor on this critical issue within a few seconds!

ACT NOW: Tell your governor and local legislators that COVID-19 vaccines must be voluntary!