Views 4008
Posted on:
Friday, April 5th 2013 at 2:00 pm
Written By:
Heidi Stevenson
This article is copyrighted by GreenMedInfo LLC, 2013
Visit our Re-post guidelines

Petroleum forms the basis of one of the most devastating adjuvants in existence. Historically, it was considered too dangerous for use in vaccines, but it's making a comeback in this new age of recombinant DNA vaccine development. Of course, the public relations mantra is that it's safe—so why is it kept quiet?

The current hype in a new vaccine against foot-and-mouth disease is all about how the new ones are safer. But are they? The clue is in what isn't discussed: the adjuvants. PLoS reports that a UK government and Big Pharma funded study has found a new approach, using recombinant DNA technology, to create empty capsids, that is, empty virus protein shells, to use as antigens against foot-and-mouth disease.[1] The hollow antigens would be grown inside insects.

Only the surface of an antigen is required to show the immune system how to create antibodies. This method of vaccine development makes it impossible to spread the infection, since none of the active part of a virus is included. It also means that vaccine antigens can be made both rapidly and relatively cheaply.

There's one big disadvantage, though. The immune system isn't all that dumb.  It does appear to be capable of distinguishing between genuine and fake threats. So, something is needed to trick it.

These synthetic antigens aren't able to trigger much of an immune response when injected. Therefore, an adjuvant is required, and it must be particularly strong for the vaccine to trigger a strong enough immune response to result in antibodies to the antigen.

The problem is that all adjuvants are, by definition, toxic. Their function is to fire up the body's immune system. Try this analogy: 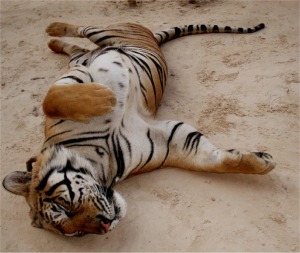 Picture a tiger in a cage, one that's well-fed, content, and has spent his entire life in it. The audience wants a show and the zookeepers want to give it. So they toss some chicken skins in his cage, hoping he'll get excited, and start growling and shredding the skins.

But they fail to interest him. He's used to a certain amount of aggravation. Kids hooting don't faze him at all. People tossing odds and ends of things into his cage ... oh well, he's gotten used to it. So, the zookeepers—having no moral sense about the animals under their care—spray the tiger with pepper spray.

Now, that gets him riled up! He roars and looks for something to attack. And what does he find? Those chicken skins. So he puts on a great show, fussing and fuming and shredding those skins to bits.

The pepper spray is equivalent to a vaccine adjuvant. Had the zookeepers tossed live chickens into the cage, that tiger would have gone after them and put on a great show. But chicken skins just weren't interesting enough.

And that's exactly what this vaccine will require. According to the PLoS study, the adjuvant proposed for use is called Seppic 206B. The manufacturer's website defines it as:

Mineral oil is made from petroleum. It is the same oil that's the basis of Freund's adjuvant, which is used to create autoimmune disorders in laboratory animals by injection. Shortly after discovery, they were banned from use in humans because they were recognized as too dangerous.

And this is what is now being praised as safe. The publicity gives the impression that the vaccine itself is safe, but careful reading shows that the safety element is associated only with the manufacturing process—the fact that no live virus is used, so there's no chance of accidental infection or escape. It has nothing to do with the safety of injecting it.

The initial goal of this new technology is to produce a new vaccine against hoof-and-mouth disease so that it can be used on a mass scale in livestock. The plan, obviously, is to use the same kind of adjuvant that's sold to science labs around the world for the purpose of creating severe autoimmune disorders like rheumatoid arthritis in lab animals.

As long as their pain from these horrible diseases isn't obvious, who's going to know how the animals suffer? You know that no one's going to be watching to see if they're harmed. One of the most difficult things to deal with in an autoimmune disorder is that they often don't show on the outside. Sufferers of myalgic encephalitis (chronic fatigue syndrome) have routinely been accused of malingering simply because their misery showed only on their faces.

In the case of animals raised for food ... well, these won't be healthy beasts, and it isn't healthy to eat meat from sick animals. In the case of animals raised for dairy, their milk would likely contain the inflammatory agents that result from an autoimmune disorder. You have to wonder at that. Will they redefine the "safe" levels of inflammation markers in milk, since they usually won't find pathogens associated with it? Or just pasteurize it more? That process already exists in long shelf life milk that doesn't require refrigeration.

... the approach we have demonstrated here may be applicable across a wide range of human and animal picornaviruses, including polioviruses and coxsackieviruses.[1] [Emphasis mine.]

It is not the intention to use this technology only on animals. The goal is to develop vaccines for humans. These vaccines, by their very nature, will require very strong adjuvants.

The nature of any adjuvant is to be toxic. That's what makes them work. The weaker the antigen, the stronger the adjuvant must be. The new technology utilizes an adjuvant that's known to be extremely toxic, so much so that it's used to produce autoimmune disorders in lab animals.

This mineral oil adjuvant is already in use on farm animals. Aside from the incredible abuse that factory farming heaps on those poor beasts, how many of them live in constant pain simply because of the vaccinations given? But these animals are kept out of sight—and out of sight does tend to mean out of mind. After all, most people still buy their meat in supermarkets, which are the mainstay of these industrialized farms.

The real goal is to bring these mineral oil based adjuvants to humans. These, and others like squalene, which is responsible for the recent mass outbreak of debilitating narcolepsy from the swine flu vaccine, will be used so that Big Pharma can produce vaccines quickly and cheaply.

We're living in an era of mass vaccination. The results are showing up in our children. The average child is now sick. The countries with the highest vaccination rates have the highest child mortality rates. Rather than do legitimate studies to identify the reasons for it, we see junk study after pseudo study trying to convince us that vaccines are just fine. Meanwhile, even with strong evidence of vaccination harm, the push is on to produce more and more, faster and faster.

And the lives that are devasted? Oh well, that's too bad ... and anyway, it's mere coincidence when a child gets autism or arthritis or asthma or bullous pemphigoid or cancer or diabetes or eczema or ...

Note: Study funders were the Wellcome Trust, a foundation started by the company now called GlaxoSmithKline; DEFRA, UK agency that controls animal vaccination and promotes it; Medical Research Council, an agency funded by the taxpayers.