Outbreaks of Measles: Should We Be Concerned? 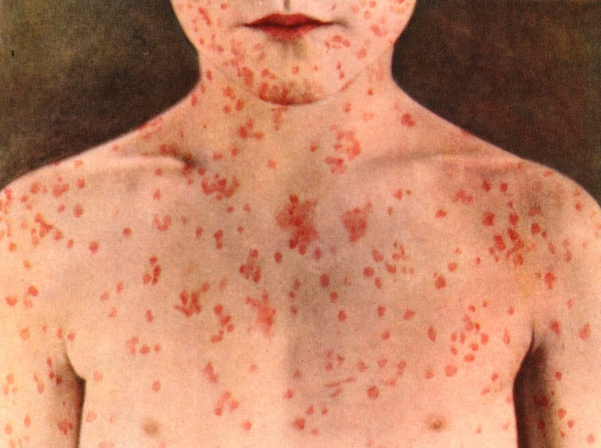 Prior to 1960, most children in the United States and Canada caught measles. Complications from the disease were unlikely. Previously healthy children usually recovered without incident.

In the 1960s, a measles vaccine was introduced. During the next several years, cases of the disease declined. However, a significant reduction in the severity of measles occurred long before the vaccine was introduced. For example, in 1900 there were 13.3 measles deaths in the United States per 100,000 people. By 1955 -- eight years before the first measles vaccine became available -- the death rate had declined on its own by 97.7% to .03 deaths per 100,000.(1) Data published in International Mortality Statistics shows that from 1915 to 1958 the measles death rate in the United States and United Kingdom declined by 98%.(2)

When the measles vaccine was introduced in 1963, health officials were confident that they could eradicate the disease by 1967.(3) That did not occur. In 1978, the federal government announced its new goal to eradicate measles from the U.S. by 1982.(4) That did not occur. In 1994, health authorities once again targeted measles for elimination from the Western Hemisphere by the year 2000.(5) Although the CDC officially declared that measles was eliminated in 2000, outbreaks continue to occur.

What is causing these small outbreaks of measles? According to authorities, decreasing vaccination rates are responsible. However, vaccine coverage rates in the United States have remained high and stable since 1996. According to the World Health Organization (WHO), every year for the past 17 years, about 92% of all 1-year-olds eligible for a measles vaccine (MMR) have been vaccinated.(8) Thus, if measles cases are on the rise, it cannot be blamed on decreasing vaccination rates.

Another problem with the measles vaccine is that it may be technologically archaic, inadequate for the 21st century, out of alignment with current scientific knowledge about how the immune system operates. It was made to be given with a "one dose fits all" approach. It assumes that everyone is at equal risk of complications from disease and that their immune responses to the vaccine will be similar. However, a recent study confirmed that when healthy children are vaccinated against measles there is a wide variation in their antibody levels. The diversity of these inter-individual antibody responses may determine whether the vaccine is protective or ineffective when the vaccinated person is challenged by the disease.(10)

Vaccine failures also occur because of decreasing immunity over time. When the measles vaccine was introduced, authorities promised everyone that one dose would protect for life. But immunity from vaccination is temporary, the reason a booster dose was added to the vaccine schedule -- to compensate for the short‑lived boost in antibody production from just one shot. High antibody levels gained through vaccination decline after several years, unlike natural immunity which provides lifelong protection against the disease.

It is also important to understand that artificial immunity conferred through vaccination may be stimulated by regular contact with the natural disease. This is known as exogenous boosting. However, due to widespread measles vaccination, circulation of the natural measles virus is rare, lowering opportunities for boosting immunity among vaccinated persons. Scientists believe that this may contribute to waning antibody levels, loss of population immunity to measles, and an increased ability of vaccinated persons to contract and transmit the disease.(9)

In 1933, A.W. Hedrich published a study on epidemiological patterns of measles. He concluded that when 68 percent of children less than 15 years of age are immune to the disease, epidemics do not develop.(13) Authorities retained this general idea -- that a precise degree of herd immunity will prevent epidemics -- but remain unclear about the level required to achieve it.

In 1991, the CDC concluded that measles outbreaks can be avoided if 70 to 80 percent of two‑year olds in inner cities are vaccinated.(14) A 1992 study published in the Journal of the American Medical Association also concluded that the  "immunization coverage of two‑year olds of 80 percent or less may be sufficient to prevent sustained measles outbreaks in urban communities."(15)

Today, authorities concede that earlier guesses about herd immunity were wrong. Greater than 90% of all eligible children in the U.S. have been vaccinated against measles yet outbreaks continue to occur. Even two doses of the measles vaccine are insufficient to achieve the elusive herd immunity and authorities are now demanding that nearly everyone must be vaccinated or the people who are vaccinated won't be protected!

Although measles is rarely a dangerous disease in developed nations where proper nutrition and access to healthcare are available, in third world nations where pregnant mothers and their babies are malnourished, measles can be a serious disease. However, a measles vaccine may not be sufficient to protect children from excess morbidity and mortality.

These examples appear to confirm that high vaccination rates are not sufficient to reduce complications and deaths from measles and other causes. Clean water, proper nutrition, good sanitation, and easy access to health care are the most important factors to improve infant mortality rates in unclean, poorly nourished, and impoverished areas of the world.(17-19)

Malnutrition is a global problem and may be the most significant factor requiring immediate attention. It has been linked with a diminished immune function. A weakened immune system often results in an increased susceptibility to infections.(18) Even mild infections have adverse effects on nutritional status. Conversely, almost any nutritional deficiency will lower resistance to disease.

The importance of proper nutrition cannot be overemphasized. For example, several studies have shown that high doses of vitamin A are protective against complications and deaths from measles. A recent paper published by the International Journal of Epidemiology found that vitamin A treatment for measles recommended by the World Health Organization reduced measles mortality by 62%.(20) A randomized clinical trial published in the British Medical Journal found that the death rate in children under 2 years of age declined by 87% in the group that received vitamin A supplementation when compared to the group that only received routine treatment.(21)

Pregnant women and children living in third world nations need to be provided with healthy, nutritious food and supplemented with all the vitamins and nutrients required for building strong bodies and robust immune systems. There are many reasons why outbreaks of measles continue to occur in both developed and developing nations. By refocusing our efforts on addressing archaic vaccination policies while eliminating hunger and malnourishment, childhood challenges from infectious diseases do not have to invoke anxiety and fear. Some infections might even provide advantages. For example, studies confirm that women who contracted measles or mumps in childhood are significantly less likely to develop ovarian cancer as adults.(22,23)

Considering the evidence presented in this paper, perhaps the CDC and other health authorities should stop provoking inordinate concern over 539 cases of measles in the United States out of a population of more than 318 million -- 1 case, no deaths, per every 590,000 citizens -- and should focus instead on a rising epidemic of type 1 diabetes that has been scientifically linked to vaccinations (24,25) or aluminum adjuvants in vaccines that have been scientifically linked to autoimmune and neurological disorders.(26-29)

Our health authorities could also bring attention to the serious problem of malnutrition in our own great nation. In 2010 (the most recent year with complete figures) 2,948 people died from nutritional deficiencies.(30) Why is there manufactured outrage over 539 cases of measles (no deaths) in the United States but complete silence over nearly 3,000 American deaths annually from nutritional deficiencies?

The FDA, CDC, WHO, and other overzealous pro-vaccinators need to back off from their "one dose fits all" technologically archaic vaccination policies and stop blaming non-vaccinators for vaccine failures. If you take an aspirin to ward off a headache and you still feel a throbbing pain, the aspirin didn't work. It failed. The manufacturer made an inferior product. Your headache was not caused by everyone else nearby who refused to take an aspirin. That's ridiculous.

The measles vaccine also poses significant risks of irreversible harm, including the potential for blood disorders, sensory impairments, immune system suppression, brain damage and death. These possibilities are well documented in the medical literature and manufacturer's product inserts.(31) Therefore, no one should be intimidated or coerced into vaccinating against their will. Parents must remain free to accept or reject vaccines for their children.

4. Hinman AR. The opportunity and obligation to eliminate measles from the United States. Journal of the American Medical Association 1979; 242(11): 1157-62.

Neil Z. Miller is a medical research journalist and the Director of the Thinktwice Global Vaccine Institute. He has devoted the last 25 years to educating parents and health practitioners about vaccines, encouraging informed consent and non-mandatory laws.