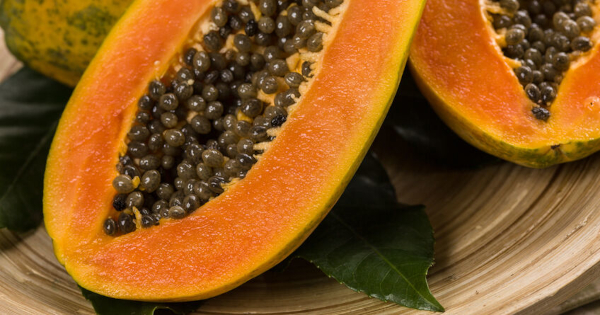 Papaya is more than just a delicious treat, especially when served cold and juicy in its ripeness. It also provides a wealth of benefits against wounds, skin damage and gut problems, to name a few of its precious therapeutic effects lauded since ancient times

Papaya is a standout tropical fruit for abundant reasons. Since time immemorial, the whole plant -- from the leaves and seeds to the ripe and unripe fruits -- has been used as a traditional medicine. Today its multifaceted healing properties make the sweet, juicy papaya a nutraceutical fruit made for better health.[i]

A single small piece of papaya, weighing 152 grams (g), contains 15 g of carbohydrates, 3 g of fiber and 1 g of protein.[ii] It offers 157% of the recommended daily intake of vitamin C, 33% of the RDI of vitamin A and trace amounts of magnesium, calcium and vitamins such as B1, B3, B5, E and K.

From its diuretic and anti-hypertensive to wound healing and anti-tumor benefits, the papaya fruit offers not just delicious taste but also all-around wellness support.[iii] Here are some of its therapeutic benefits.

A 2000 study examined the prevalence of the use of papaya as a topical ulcer dressing by nurses in Jamaica.[iv] Among the respondents, 75% reported using topical papaya, thought to promote desloughing, granulation and healing in chronic skin ulcers.

"It was cost effective. Papaya was considered to be more effective than other topical applications in the treatment of chronic ulcers," the researchers wrote, although cited some difficulty in preparing the fruit and the occasional burning sensation reported by the patients.

In animal models, papaya extract caused a significant effect on the healing process of an incised oral wound.[v] On the 14th day, papaya extract with 75% concentration demonstrated "perfect epithelial layer and fibrillation," according to a 2019 study. A separate study showed that Carica papaya promoted significant wound healing in diabetic rats, with the fruit extract exhibiting antimicrobial activity against five organisms tested.[vi]

Dried papaya latex as 1.0% and 2.5% hydrogels was also deemed effective in treating burns and thus supported the traditional use of the fruit for this benefit, based on the findings of 2005 research.[vii]

The enzyme called papain in papaya is believed to make protein easier to digest.[viii] In the tropics, papaya is deemed an effective remedy against constipation and the symptoms of irritable bowel syndrome (IBS).

In a study, subjects who took a papaya-based formula for 40 days experienced notable improvement in constipation as well as bloating.[ix] Even the seeds, roots and leaves have been shown to help treat ulcers in both humans and animals.[x]

The lycopene in papaya has been hailed for its potential to reduce cancer risk.[xi] The papaya leaf is also deemed a likely source of anticancer compounds.[xii]

Papaya has received attention particularly for its effects against breast cancer. A 2009 study found that among 14 fruits and vegetables famed for their antioxidant activities, only papaya had a significantly favorable effect when measured against the breast cancer cell line MCF-7.[xiii]

Among Chinese women, consumption of fruits and vegetables such as papaya was inversely related with breast cancer risk.[xiv]

The vitamin C and lycopene in papaya are considered protective of skin and may help reduce the signs of aging.[xv] These skin issues include wrinkles, skin sagging and other forms of skin damage, all associated with excess free radical activity.[xvi]

A 1997 study explored the potential therapeutic use of papaya latex sap combined with a synthetic antifungal and found that the formula worked synergistically to inhibit the growth of Candida albicans.[xvii]

In a separate study, papaya latex also inhibited the growth of candida when added to a culture in its exponential growth phase.[xviii] According to the team, "This fungistatic effect is the result of cell wall degradation due to a lack of polysaccharidic constituents in the outermost layers of the fungal cell wall and release of cell debris into the culture medium."

Should You Eat Papaya Raw?

For all its scientifically documented health benefits, papaya has a unique taste and flavor that's widely celebrated.

Ripeness, however, is a factor to consider if you're planning to eat it raw. If ripe, papaya can be eaten raw. Otherwise, it should be cooked before consumption especially if you're pregnant, as the unripe version is high in latex, which can stimulate contractions.[xix]

Whatever way you choose to enjoy papaya, the health perks from its strong nutrient and antioxidant offerings are here to stay.