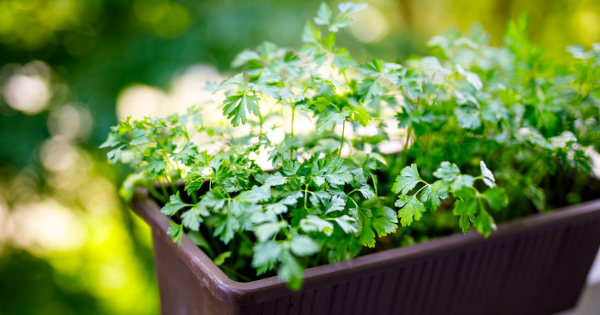 Discover the many health benefits of parsley in its fresh and dried forms, from a rich antioxidant profile to natural properties against diabetes and eye disorders

Parsley is often used as a flavoring among the chopped greens in your salad and makes a rich addition to sauces for juicy steaks, or a trusty garnish on your favorite dishes.

However, it's also a veritable medicine sitting in your pantry, perhaps as juice to relieve edema or a powerful antioxidant source. The possibilities are endless with Petroselinum crispum, an important culinary herb originating from the Mediterranean region.

Parsley contains a formidable lineup of constituents such as coumarins, carotenoids, ascorbic acids and flavonoids for a wide range of health uses. These constituents give parsley plenty of wellness benefits, from being antimicrobial and diuretic to antihypertensive and anticoagulant.[i]

In fact, it's used in Morocco mostly as an elixir to treat arterial hypertension, diabetes, and cardiac and renal disorders. Here are some of the top benefits of parsley for better health.

Parsley can be used in many flexible forms as part of a healthy diet. You may add fresh parsley to your dressings, sauces and marinades, or simply chop a few sprigs to garnish meals or add the herb to the dish by the end of its cooking time.

You may dry your fresh parsley, too. Tie a bunch together, then hang it upside down in a cool and dry place.[iii] Once completely dry, remove the stems and store the leaves in an airtight container. You may also use a dehydrator or a slightly warm oven. Why not also use the herb as a natural breath freshener? It's a proven folk remedy against halitosis in a number of places including Italy.[iv]

Parsley can be part of your own home garden; seeds can be planted outdoors in March or April, depending on your growing season, or in late summer for early growth the next spring.

Parsley is chock full of potent antioxidants, which are compounds that prevent cellular damage from free radicals and are required by the body to maintain optimal health.[v] Parsley and celery juices successfully restored antioxidant activity in animal models treated with the chemotherapy drug doxorubicin.[vi]

Further studies show that diets rich in antioxidants such as flavonoids may slash the risk of diseases, including colon cancer.[vii] And as oxidative stress plays a principal role in stress-induced gastric injury, parsley offers antioxidants such as flavonoids, carotenoids and ascorbic acid to combat it.[viii] It might interest you to know that dried parsley appeared in a study to be more antioxidant-rich than its fresh counterpart.[ix]

Many medicinal herbs and spices have been traditionally celebrated for helping to control glucose levels with minimal to no side effects.

Along with Egyptian balsam, parsley extract was found to exhibit antidiabetic and antioxidant properties in Type 1 diabetes mellitus cases.[x] The herbal preparations were found to significantly reduce mean blood glucose levels and significantly increase insulin and total antioxidant capacity in the treated diabetic groups versus the control group.

In a Turkish study, researchers found that parsley had a significant hepatoprotective effect in diabetic animal models, where those treated with the herb demonstrated substantially lower levels of blood glucose, among other markers.[xi]

In similar findings, a separate study concluded that due to its antioxidant properties, parsley extract had a protective effect comparable to diabetes drug glibornuride against hepatotoxicity from the disease.[xii]

Carotenoids such as lutein, beta carotene and zeaxanthin, all found in parsley, help protect the eyes and promote fully functioning vision. Consuming food rich in these carotenoids has been associated with a reduced likelihood of age-related macular degeneration and cataracts.[xiii]

In a study involving 77,466 female nurses ages 45 to 71, lutein and zeaxanthin, on top of foods rich in those carotenoids, were shown to reduce the risk of cataracts severe enough to require extraction.[xiv] Research also vouches for parsley's bone health benefits. The plant is rich in vitamin K, which is essential for bone health, and in fact packs an impressive 820% of the RDI (984 micrograms) in a one-cup serving.[xv]

In a study, aqueous extracts of parsley as well as basil and chicory, showed bone protection against glucocorticoid-induced osteoporosis in animal subjects.[xvi]

In a 2020 study, parsley showed anticancer action in human glioblastoma cells alongside an outstanding antioxidant profile. The methanol extract of the herb was also seen as a potential anti-proliferative.[xviii]

Research also showed that parsley may stop breast cancer tumor growth linked to synthetic hormone replacement therapy. In a study, animal subjects exposed to apigenin, a common flavonoid found in parsley, developed fewer tumors and had significant delays in tumor formation compared to subjects not exposed to the flavonoid.[xix] 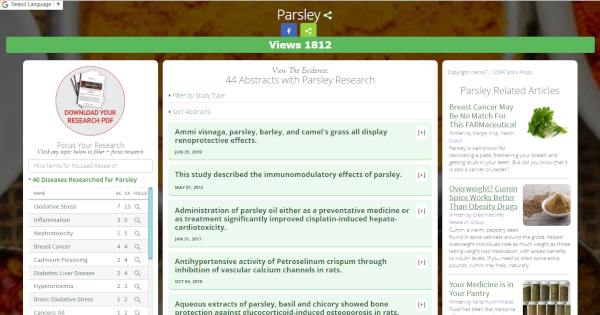