PLAGUE – Just Like Jurassic World, but with Hybrid Viruses Instead of Dinosaurs

Views 809
Posted on:
Wednesday, July 1st 2015 at 10:00 pm
Posted By:
Kent Heckenlively
This article is copyrighted by GreenMedInfo LLC, 2015
Visit our Re-post guidelines 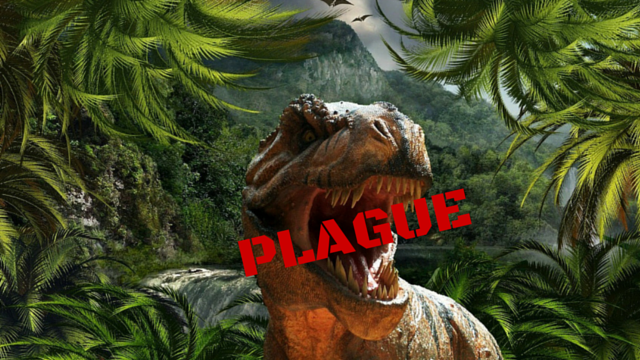 Jurassic World focuses on a lab-created, hybrid dinosaur, the Indominous Rex, causing destruction at an amusement park.  Comparatively, research shows that the XMRV virus may be wreaking havoc on the human body as a result of mouse cells in vaccines.

I really dislike being called anti-science.  Especially since the first person I wanted to be was Roy Chapman Andrews.  Don't know him?  He was the gentleman explorer and director of the American Museum of Natural History who is best remembered for a series of expeditions he led to the Gobi Desert of Mongolia in the 1920s where he discovered the first fossilized dinosaur eggs at a place called the "Flaming Cliffs."  Does he sound familiar to you?  Many people claim he was one of the inspirations for the Indiana Jones series by Steven Spielberg.  I liked Indiana Jones, but to me, Roy Chapman Andrews was cooler.  He was real.  Just like Dr. Judy Mikovits, my co-author on PLAGUE: One Scientist's Intrepid Search for the Truth About Human Retroviruses, Chronic Fatigue Syndrome (ME/CFS), Autism, and Other Diseases.

Another fictional scientist I liked was Ian Malcom, played by Jeff Goldblum in the movie, Jurassic Park.  He studied chaos theory, which basically means if you try to change a lot of things at the same time, you're probably going to have a major breakdown.  The greater the complexity, the greater the chance of catastrophic failure.  Easy to understand, right? In his case he was the only voice of caution, the guy saying, hey, let's wait and learn a few more things before we open a theme park with genetically created dinosaurs.  Nobody listened.  It was just too cool.  You know how it ended.  Lots of running and screaming.

I can't say I even briefly considered Ian Malcom's chaos theory when my daughter was born.  Vaccinate her on day one of life?  Sure!  Isn't science great?  Even when she came down with seizures at six months and was diagnosed with autism at age three I never considered it could be those helpful well-baby visits that were the problem.  I mean, isn't the first rule of the Hippocratic Oath, "Do no harm?"  Surely the high priests of science couldn't make such a rookie mistake, could they?

It was the reaction of my younger son Ben at his eighteen month well-baby visit that made me start to question.  What I saw made me a different person.  There was the person who trusted the medical community before, and the one afterwards who saw that a monstrous lie was being perpetrated on society.

I became an activist, eventually finding a home at the website, Age of Autism, and used it as my perch to seek out those honest scientists who might explain what had happened to my daughter and how to help her recover from her silent prison.  That's how I came across Dr. Judy Mikovits who published an article in the journal Science in October of 2009 showing a recently discovered retrovirus, XMRV, (xenotropic murine leukemia virus-related virus) in 67% of a group of chronic fatigue syndrome (also known as ME/CFS) patients and in 3.7% of healthy controls.

But it was her interview on the Nevada Newsmakers television show of October 8, 2009 that really caught my attention.  She discussed chronic fatigue syndrome (ME/CFS), then moved to autism.  She said,

"There's always the hypothesis that my child was fine, then they got sick, and then they got autism.  If I might speculate a little bit.  This might explain why vaccines lead to autism in some children because these viruses live and divide and grow in the lymphocytes, the immune response cells, the B and T cells.  So when you give a vaccine you send your B and T cells into overdrive.  That's it's job."

This was sounding like HIV/AIDS to me.  As somebody who grew up in the San Francisco Bay Area I was familiar with the idea of retroviruses.  Could we be looking at some kind of non-fatal retrovirus which was causing autism and other diseases?  I consulted the Pediatric AIDS web-site for the University of California, San Francisco and found this warning,

And if this was a retrovirus, where did it come from?  Well the name, xenotropic murine leukemia virus-related virus gives you a bit of a hint if you break it down.  Murine is the Latin word for mouse.  You could say the basic design is a mouse leukemia virus and it's infecting humans.  It probably made some adjustments to its genetic code so it could stick around in a different species.  It's a hybrid because it came from one species, but somehow jumped into another species.  Viruses are promiscuous in that way, kind of like Warren Beatty back in the day.

So, like any good investigator we went back to the beginning, the first recorded cases of chronic fatigue syndrome (ME/CFS) and autism, to see if there was anything we could learn.  The first recorded cases of chronic fatigue syndrome gave off the strongest signals.  How about this for clarity?  The first outbreak of chronic fatigue syndrome occurred among 198 doctors and nurses at Los Angeles County Hospital in 1934-1935 during a polio epidemic.  What I found is that the doctors and nurses at that hospital received an early polio vaccine developed by a researcher named Maurice Brodie.  And what did Brodie grow his polio vaccine in to weaken the virus?  Mouse brains. (Journal of Experimental Biology and Medicine, March 1, 1935)  Trials of the Brodie vaccine were also initiated among 7,000 children in North Carolina, Virginia, and California (Journal of Public Health, February 1936), just about the same time the first cases of autism began to appear.

Is it crazy to think that XMRV might have been created as a result of early vaccine experiments?  Not according to some scientists who published an article in January of 2011 in Frontiers in Microbiology.  They wrote,

"One of the most widely distributed biological products that frequently involved mice or mouse tissue, at least up until recent years, are vaccines, especially vaccines against viruses . . . It is possible that XMRV particles were present in virus stocks cultured in mice or mouse cells for vaccine production, and that the virus was transferred to the human population by vaccination."

And what about the idea that mixing human tissue and mouse tissue in culture to weaken a virus for a vaccine might produce a different type of virus with deadly effects?  An article in the journal Retrovirology in 2013 looked at something similar, the practice of using mouse tissue to promote the growth of human cancer cells (a process called xenografting) for research.  Those scientists wrote,

"The results suggest that xenograft approaches commonly used in the study of human cancer cells promote the evolution of novel retrovriuses with pathogenic properties."

There it is from the scientists themselves.  Hey, we might be creating deadly viruses without knowing it!

How long might this process take?  Just ten days, according to an article published in the Journal of Virology in August of 2013.  "The presence of reverse transcriptase activity at 10 days post-infection indicated the presence of RCRs [replication competent retroviruses].

"It may have taken God just seven days to make the world, but in ten days scientists in a lab can make a new retrovirus.  Now that's what I call progress!

Which takes me back to Jurassic World.  In the movie, the park has been open for twenty years, but attendance is falling and they need something to draw the crowds.  They decide to create a new, more terrifying dinosaur, a hybrid of various extinct and currently living animals, the Indomnius Rex, to excite the public.  Owen Grady, the voice of caution in the movie, doesn't think it's a good idea.  He's right.  Again, there's lots of running and screaming.  Maybe XMRV is the real Indomnius Rex of our world.

Jurassic World is now the fastest movie to make a billion dollars.  I don't think it's just because of the dinosaurs.  I think it's because it depicts a fundamental clash IN science.  The public worries that many scientists lack wisdom.  They barrel forward with their wonderful plans, but don't consider the possible problems.  That's not being anti-science.  That's looking at the entire picture.  That's like looking not just at how DDT kills mosquitoes, but how it might impact animals higher up the food chain, like the bald eagle, symbol of our country.  Banning DDT wasn't anti-science.  It was pro-science.

The best scientists demonstrate a humility before nature.  They don't try to play God.  They try to understand.  When Roy Chapman Andrews discovered his fossilized dinosaur eggs in the Gobi Desert it wasn't because he went looking for them.  He thought the Gobi Desert might be the place where the first mammals evolved.  That's what he was trying to find.  But he was open-minded, ready for the surprises which might reveal themselves.

Dr. Judy Mikovits didn't start her investigation into chronic fatigue syndrome (ME/CFS) because she wanted to implicate vaccines in the development of that disease as well as autism.  It's just that the evidence led her to that conclusion.  And as a scientist it was her duty to tell the truth as best she understood it.

We go to see movies like Jurassic World because we recognize the mindset of many arrogant people who believe they know better than the rest of humanity.  We can't create dinosaurs yet, but if we could, we know some scientists would make bad decisions.  Just like they may have done with vaccines.

Read PLAGUE: One Scientist's Intrepid Search for the Truth About Human Retroviruses, Chronic Fatigue Syndrome (ME/CFS), Autism, and Other Diseases and draw your own conclusion as to whether the good intentions of scientists have caused great suffering.  And read about Dr. Judy Mikovits, a courageous scientist that others in her field would do well to emulate.