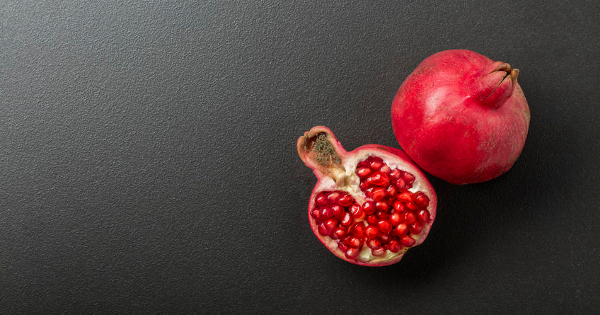 If you are one of the millions of women who suffer from polycystic ovaries, there is new evidence supporting a simple, natural and delicious remedy: a glass of sweetly tart pomegranate juice, infused with a live probiotic. It’s simple, effective and yielding serious results

Although the exact cause of PCOS is unknown, too much of the male hormone androgen is believed to be a primary causal factor, while obesity, excess insulin, heredity and chronic, low-grade inflammation can be contributing factors.[iii] Women who are diagnosed with PCOS may be affected by other health problems, including insulin resistance leading to diabetes, high blood cholesterol and cardiovascular disease.[iv]

Pomegranates have a long history of use in traditional medical applications, many of which have been validated in modern times. Fresh pomegranate juice, a powerful antioxidant, has been shown to have blood-sugar regulating properties and to enhance fertility, as well as provide relief to sufferers of hormonal diseases such as prostate cancer and breast cancer, among other studied benefits.

The established links between PCOS and imbalanced blood sugar and sex hormones have spurred researchers to consider pomegranate juice as a potential treatment for PCOS. There is a rigorous scientific process to validate new treatments and pomegranate juice has demonstrated therapeutic potential across several fronts. It was successfully used in scientific trials to reduce cardiovascular risk factors in patients with PCOS and improve testosterone levels and reduce insulin sensitivity.

Promising results such as these led researchers from the Shiraz University of Medical Sciences and School of Agriculture in Shiraz, Iran, to further study pomegranate juice for PCOS. The multi-disciplinary group of researchers conducted a controlled trial, which is now contributing additional peer-reviewed science to the body of evidence supporting the use of this powerful natural medicine.

Published in the journal Nutrition, Metabolism & Cardiovascular Diseases in February 2019,[v] the study's aim was to determine if synbiotic pomegranate juice might improve symptoms in patients with PCOS. Synbiotic is defined as "a combination of prebiotics and probiotics that synergistically promotes gastrointestinal health by improving survival and adherence of live microbial dietary supplements."[vi]

The addition of active cultures of healthy gut bacteria was posited by researchers as potentially therapeutic in the treatment of PCOS, since previously collected data have shown that dysbiosis of gut microbiota, usually due to a high fat-sugar diet, causes intestinal permeability leading to the chronic inflammation that is a frequent symptom of PCOS.[vii]

Specific symptoms being measured in this randomized, triple-blind, parallel study were glycemic indices, sex hormone profile and anthropometric measurements such as weight-for-age and -height and waist circumference. Methodology for the trial was to create four groups of 23 patients each, aged 15 to 48 years, who had no other condition related to excess androgen and who further met two of the following criteria:

Patients were excluded if they were actively taking other treatments, such as corticosteroids, antibiotics and hormone pills, were smokers, lactating or had been diagnosed with other severe disease(s). A final sampling of 92 patients gave their informed consent and participated in the eight-week trial. Participants were randomized into one of four groups:

In keeping with "blinded" protocols, all beverages were produced to have the same look, smell and taste. Tests were conducted pre-trial to ensure viability of the live bacteria, wherein it was determined that 108 CFU/ml of Lactobacillus rhamnosus GG, bacillus koagolans and indicous would be combined with 20 grams of inulin for the two synbiotic groups (SPJ and SB).

Dietary intake was monitored at baseline and at the end of the study via dietary recalls, and fasting blood samples were taken at the beginning and end of the intervention by a laboratory expert. Blood samples were centrifuged and measured for blood glucose, insulin, testosterone, LH and FSH.

At the end of the study, 86 patients had remained consistent with protocols throughout the eight-week period and were analyzed. For the anthropometric measurements in comparison with baseline body mass indexes (BMIs), weight and waist circumferences decreased in both synbiotic beverage groups (SPJ and SB). Waist-to-hip ratio decreased in the SPJ group and increased in the control group.

The changes in BMI, weight, waist and waist-to-hip ratio among the two synbiotic groups were statistically improved as compared to the control group, indicating that supplementation with live bacteria is beneficial to metabolism.

Regarding the fasting blood sugar (FBS), changes in the two synbiotic groups were significant compared with control group. Insulin decreased in SPJ and SB groups when compared to the baseline, but in comparison between groups, only the change between SB and the control groups was notable.

A statistically significant increase in insulin sensitivity was measured in the two synbiotic groups, marking a potent health benefit to the pre- and probiotic mixture. High insulin sensitivity allows the cells of the body to use blood glucose more effectively, thereby reducing blood sugar and staving-off onset of Type 2 diabetes.

Researchers drew their final conclusions from the study and in their report reminded that the gut truly is "the brain" that talks to the rest of the body. In their words, "bidirectional interaction between sex hormones and intestinal microflora has been shown," a finding that is supported by their research.[viii]

These findings strongly suggest that a synbiotic-infused, pomegranate beverage may improve the hormonal balance in patients with PCOS, while adding improved insulin resistance, staving off diabetes and improving BMI and body weight, while also improving the figure. I think we can all drink to that!