Views 15221
Posted on:
Tuesday, February 28th 2012 at 9:00 am
Posted By:
Orthomolecular News Service
This article is copyrighted by GreenMedInfo LLC, 2018
Visit our Re-post guidelines 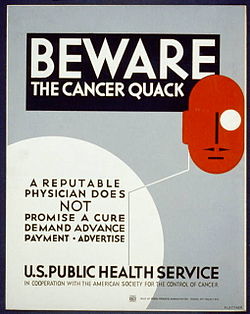 The German word for "quicksilver" was "quecksilber". American dentists shortened it to "quack" to describe the amalgam-hucksters. Quick-silver Associates write "It is sobering to realize that the original "quacks" were dentists who advocated the use of mercury amalgam."

Recently I was given a tape in which is recorded the proceedings of a committee–The Fraudulent Medical Practices Watch and Be Wary Committee–at the 84th meeting of the Federation of State Medical Boards meeting in Chicago, April 11, 1996. Three presentations were made. Dr. John Renner, a self confessed undercover agent, who described his efforts to uncover fraud including disguising himself as a patient in order to access physicians offices and to attend meetings of alternative and complementary practitioners. The second speaker was Mr. R. Bell, a prosecutor in California who told the assembled group how to achieve their goal of stripping the licenses from these doctors. Finally Mr. M. Daynor from the Federal Trades Commission described what they were doing to deal with fraud and quackery.

I agree that fraud in medicine should be dealt with very seriously and some of the examples given certainly did require that action be taken to suppress these activities. The examples dealt with physicians who were medical doctors and who were innovative in their practice but in no way could they be considered alternative nor complementary. They were down the line establishment doctors who were perpetrating fraud.

But the committee also dealt with complementary practitioners in the same vein. These were physicians who were recognized as honorable became suspect only because, unhappy with the results of their previous practice, they sought something which would help their patients more. It is obvious that the committee members had not the slightest conception of what complementary practitioners were attempting to do. Nor were they aware of the meaning of the word quack and how it became entrenched in modern language.

According to the Oxford International Dictionary the word was first used in 1638. A quack was defined as follows.

(1)
an ignorant pretender to medical skill, (2) one who professes to have knowledge or skill concerning subjects of which he is ignorant, (3) an empiric or impostor in medicine. In other words a person who professes to be a doctor when s/he is not. The word is an abbreviation for quacksalver. Mercury, known as quicksilver, was used as a treatment in medicine for many conditions including syphilis. It is of course ubiquitous in so called silver amalgams which contain over fifty percent mercury. Mercury amalgam was introduced into the United States about 1833 by two semi charlatans who inspired suspicion in more conservative dentists. Many U.S.A. dentists were opposed to the amalgam because of the toxic mercury. The German word for "quicksilver" was "quecksilber". American dentists shortened it to "quack" to describe the amalgam-hucksters. Quick-silver Associates write "It is sobering to realize that the original "quacks" were dentists who advocated the use of mercury amalgam." (see book reviews page 233)
Let us see how this original definition fits the modern problems being generated by the defenders of the faith, of the old paradigm.

(1)
An ignorant pretender to medical skill–I do not see how any physician who has passed his university examinations, has been accepted by the medical state boards and Colleges of Physicians and Surgeons as fit to practice (many with specialty training) can be said to pretend to have medical skill. If they did not have the requisite medical skills they should have been flunked out and rejected by the colleges and state boards. The term medical quack has therefore no meaning whatever. It does not exist. A quack can only be a person who pretends to be a doctor. This is illegal; legal sanctions are available for these real quacks. They do not have to be deprived of their license to practice, they do not have one or should never have been given one. And they should be charged.

(2)
One who professes to have knowledge or skill concerning subjects of which he is ignorant. One of the main concerns of this committee was the use of chelation therapy. They appear to be really fearful of the American College of Advancement in Medicine (ACAM). But before the committee can legitimately be critical of this procedure one would expect that they would have knowledge and skill concerning this subject. In fact they appear to be almost totally ignorant of the subject, how it is used and the results that are obtained. On the other hand, the people they have labeled as quacks do have the skill and knowledge about the treatment they have been using for so many years on over one million patients.
(3)
An empiric or impostor in medicine. Empiric is defined as follows (1) one of the sect of ancient physicians called Empirici who drew their rules of practice only from experiences (2) one who in matters of science relies solely upon observation and experiment (3) one who practices phisic or surgery without scientific knowledge. Definition number 3 does not apply since the same argument I have used in the paragraph above deals with this. The first two definitions seem pretty good to me. Where would modern medicine have been without reliable observations and experiments. Thus being called an empiric is probably more of an honor since it describes what physicians should try to do.

Who is to be trusted more, an empiric who has seen the results of the therapy or a theoretician who on a priori principles knows that the treatment could not possibly work. Am I to be ignored after I have supervised five double blind controlled experiments beginning in 1953, after have seen the result of orthomolecular treatment on thousands of patients? Or should the theoretician, who believes my results are fictitious, because his blind adherence to theories tells him that no vitamin could possibly help any schizophrenic patients? Empirici should depend much more on observation and much less on theories which in any event are evanescent and change every few decades. Would anyone today accept the explanation for how penicillin worked during the last war as being accurate today.

About three hundred years ago Dr.

T. Sydenham, in London, nearly lost his license and was challenged to a duel because he had observed that following the old and ancient precepts for treating small pox increased the death rate. The theoreticians had believed for 1500 years that small pox was due to an increased head of pressure by the evil humours and that they had to be released by increasing body temperature (increasing fever). This they did by covering the unfortunate patients with too many blankets, closing the windows and giving them strong liquors. Dr. Sydenham observed that the death rate was much higher in the summer than in the winter. This observation was considered wrong since theory stated that the death rate should have been much less in the summer, as it was much easier to overheat people in England in the summer.

They had no central heating. After Sydenham realized that the theory failed to predict the outcome of treatment he concluded the theory was wrong. He, in fact, would have been labeled a quack by this modern USA committee. He, therefore, changed his treatment by decreasing fever, by leaving open the windows and by allowing only the consumption of light ales. In other words he recommended easing or preventing fever and ample fluids. Is this not the treatment for fever today? Here we have a classic example of a physician, once classified a quack, who using the committee's definition, practised quack medicine, who is today considered the father of modern bedside medicine. If our committee had had their way 300 years ago we would still be treating fever by increasing it, by keeping the air hot and humid and by feeding our patients whiskey, scotch and bourbon.

It is clear that this committee has corrupted the term quack. After listening to this interesting tape twice I have concluded that they have adopted the definition of quack used 300 years by medical establishments. Simply, as they see it, a quack is anyone who disagrees with them. In other words anyone who subscribes to the old paradigm is practicing scientific medicine while anyone who brings new information and techniques which is going to challenge the old paradigm is automatically a quack. They conveniently forget that 85% of all medical practices are based upon observation, upon anecdote, upon case histories, upon vast experience and in no way, using their definition, can be considered as scientific medicine.

I think they are wrong. I suggest that the real pretenders to information are these committees who try to suppress the development of medicine. Unfortunately they are still in the majority and still have the power to make life very uncomfortable for many good investigative physicians. Luckily seven States have already passed legislation which will neuter (the committee's term) the state boards so that they can no longer impose their own definition of the term quackery and it is being considered in 12 to 15 other states and also in Congress in Washington. In Canada two provinces have already made similar enlightened moves and there is pressure by the public in several others for similar legislation.