Smoking is 36 Times Worse Than Working at a Nuclear Reactor 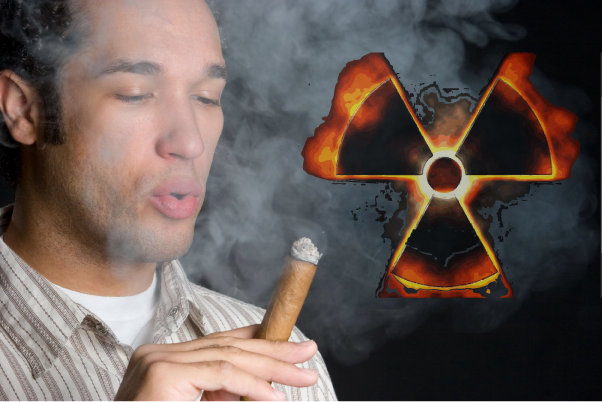 What if the #1 reason why tobacco caused cancer was actually a hidden radioactive element, and that the tobacco industry covered it up for decades?

It is well-established that 25-30% of all cancer are caused soley by tobacco consumption – a completely avoidable cause.

But what if the tobacco itself were not actually the primary cause of the cancer, but something else contaminating it? And what if it the tobacco industry knew this lethal contaminant was in their product, and even knew how to remove it, but did and said nothing for over 30 years in order to conceal this deadly secret from the public?

In 1998, major tobacco industries' internal secret documents were made available online by the Master Settlement Agreement, revealing that the industry was aware of the presence of a radioactive substance in tobacco as early as 1959.

It was discovered in 1964 that the cancer-causing radioactive substance was Polonium 210, which millions still inhale in their cigarette smoke, unwittingly. Polonium 210 is a byproduct of the decay of uranium daughter isotopes, which, while occurring naturally in the environment, are primarily found within our soil as a result of pollution from various industries. Uranium mining is one source, as are the nuclear and coal-fired power industries. In fact, "fly ash" produced from coal-fired power carries 100 times more radiation into the surrounding environment than a nuclear power plant producing the same amount of energy.1 This is, of course, when nuclear power plants properly contain their radioactive fuel and waste and don't release massive, irretrievable quantities of radioisotopes into the environment, as occurred in Chernobyl and Fukushima. Nuclear weapons and munitions (depleted uranium), are another well-known source of global contamination.  No matter where the uranium comes from, tobacco plants selectively absorbs and concentrates the byproduct of its decay, Polonium 210, to dangerous -- if not lethal -- levels. The relatively high levels found within tobacco are rather consistent over time and geographical area.2

A recent review published in the journal Nicotine & Tobacco Research summarized this disturbing fact of history as follows:

...[T]he industry was not only cognizant of the potential "cancerous growth" in the lungs of regular smokers but also did quantitative radiobiological calculations to estimate the long-term (25 years) lung radiation absorption dose (rad) of ionizing alpha particles emitted from the cigarette smoke. Our own calculations of lung rad of alpha particles match closely the rad estimated by the industry. According to the Environmental Protection Agency, the industry's and our estimate of long-term lung rad of alpha particles causes 120-138 lung cancer deaths per year per 1,000 regular smokers.

These findings indicate that the tobacco industry's relationship to their consumer base was (and still is) homicidal, in the worst, premeditated sense of the word. Moreover, the industry actually knew how to mitigate the problem, but realized it would interfere with the addictive power of their product (and therefore profitability) to do so:

Acid wash was discovered in 1980 to be highly effectively in removing (210)Po from the tobacco leaves; however, the industry avoided its use for concerns that acid media would ionize nicotine converting it into a poorly absorbable form into the brain of smokers thus depriving them of the much sought after instant "nicotine kick" sensation.

Polonium 210 is extraordinarily toxic when ingested or inhaled. In fact, it is 4500 times more toxic than radium 226  -- a startling fact considering that during the Manhattan Project (1944), the "tolerance dose" for workers was set at 0.1 microgram of ingested radium. When incorporated into the body, radioisotopes like  Polonium 210 emit alpha particles, which are the radio biological equivalent of howitzers on a cellular level, profoundly damaging, mutating and destroying DNA, as well as causing other forms of irreparable damage to the cell. Because of the fact that the dominant radiation risk model does not acknowledge the profoundly detrimental effects of low-dose, internalized radioisotope exposure (largely because it was developed before the discovery of DNA in the early 50's and was based on external exposures to the type of gamma-radiation associated with atomic bomb blast), the true dangers associated with Polonium 210 have been largely concealed or discounted.

According to a review published in the journal Health Physics in 2010, smoking tobacco has resulted in "443,000 deaths and 5.1 million years of potential life lost among the U.S. population each year from 2000 through 2004." Furthermore, the review estimated that the associated collective radiation dose from smoking is "more than 36 times that to the workers at all the U.S. nuclear power plants, U.S. Department of Energy nuclear weapons facilities, and crews of all the vessels in the U.S. Nuclear Navy." It is no surprise then that it has been suggested that tobacco products should carry a radiation-exposure warning label.3

For additional research on Polonium, visit the GreenMedInfo database on the subject. 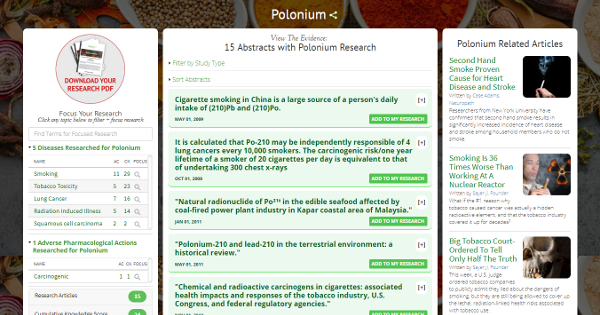