Radiation, The Other Toxin 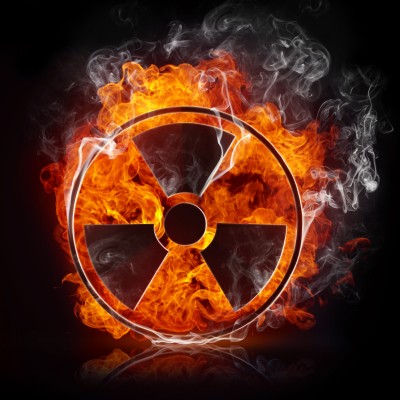 Few things strike fear into the hearts of men like the invisible terror of nuclear radiation. While the mention of a mushroom cloud sealed the sales pitch to invade Iraq a decade ago, today the subject of radiations whether from electromagnetic fields like cell phones, medical equipment, depleted uranium weaponry or Fukushima ( the elephant in the room ) has oddly been removed from mainstream conversation.  One would think public health bulletins and information covering preventive measures would appear? The silence is deafening.

Various cancers are being associated with "safe" medical imaging devices. Shocking reports of Post Traumatic Stress Disorder, suicides and cancers are common among returning Iraq War veterans, the selfsame symptoms one would expect from radiation poisoning... currently being "treated" with antidepressants and psychotherapy.  Independent sources reveal high levels of radioactive particles from failed Japanese reactors impacting the west coast of The United States. There seems to be a growing awareness of these threats... and a subdued panic, but little evidence of personal protection know-how. When people feel helpless they get scared. Don't get scared... get informed and take steps to minimize the damage to your cells.... obviously no one else will.

Radioactive particles, ionizing radiation and Electro-Magnetic Fields all have the common affect of displacing electrons and breaking molecular bonds. Basically, electrons are bumped out of orbit from a molecule turning it into a positively charged electron-hungry "free radical" or electron-rich bonds between molecules come under attack resulting in the destruction of DNA, fatty membranes and other cell structures.... garden variety OXIDATION!

So depending on the energy levels, exposure and type of radiation, molecules are damaged and torn apart which translates into ruptured red cells, decreased oxygen delivery, impairment of the nervous system, opportunistic infections and developing cancers. Higher up the scale, victims suffer burns or are scorched to cinders. Even radiations at their lowest levels generate free radicals and begin to shift the electrical charge terrain of the body which will eventually result in disease.

We are struck constantly by background cosmic radiation, telecommunication waves, EMFs from electrical appliances and the all familiar photons and radiant heat that are sunshine and easily overcome them.  To help unravel the puzzle, fish, birds and animals seem to be more or less immune to radiation as evidenced by thriving wildlife around the abandoned reactor at Chernobyl. So how can animals survive where humans quickly exceed dangerous levels of exposure?....Animals can produce Vitamin C in massive quantities on demand! Flooding the system with antioxidant electrons sponges-up free radicals and protects remaining structures from ...oxidation.

Since one can be irradiated or actually ingest radioactive elements like uranium, iodine, cesium, or strontium, two slightly different approaches are needed. High antioxidant intake (like Vitamin C in multi-gram not milligram quantities ) limits the damage from waves of energy or charged particles passing through the body.   Radiation emitting elements lodged in lungs or glands are exponentially more dangerous and require the addition of chelators like clays, chlorella and zeolites to help remove them.

Iodine supplementation pre-loads the thyroid so that radioactive iodine is refused when encountered. Zinc, selenium and sulfur help displace unwanted glowing elements. Potassium, magnesium and bicarbonate act as pH buffers and facilitate oxygen penetration so cells can maintain energy production. Plant based antioxidants like curcumin, astragalus, astaxanthin and resveratrol absorb oxygen radicals so are protective. Bee propolis, manufactured by honey bees from tree sap resins and many essential oils and extracts can be added. While antioxidant supplements have great ORAC strength, don't overlook larger quantities of less powerful food sources in fruits, berries and vegetables. It's an aggregate total of electrons and electron storing substances that is required to offset the sum of the oxidative insults. Think QUANTITY!

Reviewing past articles  ( "Healer's Grail", "Healer's Compass", "Healer's Toolbox" and "Toxic?" )  should make apparent the fact that oxidation causes the dissociation of all molecular constructs and is at the root of disease. The affects of radiations are little different from those of acids, oxygen, toxins and various other electron hungry oxidants and free radicals. Life persists because it resists oxidation and maintains its appearance for a time with electron abundance, overwhelming energy.

Capt. Randall is the author of Forbidden Healing and an independent health researcher and organic farmer. He studied chemistry and biology at the University of Florida. His interests range from marine science to archaeology and ethnobotany.

GreenMedInfo.com - Why There Is No "Safe" Level Of Radiation