Views 10811
Posted on:
Friday, May 21st 2021 at 5:00 pm
Written By:
GreenMedInfo Research Group
This article is copyrighted by GreenMedInfo LLC, 2021
Visit our Re-post guidelines 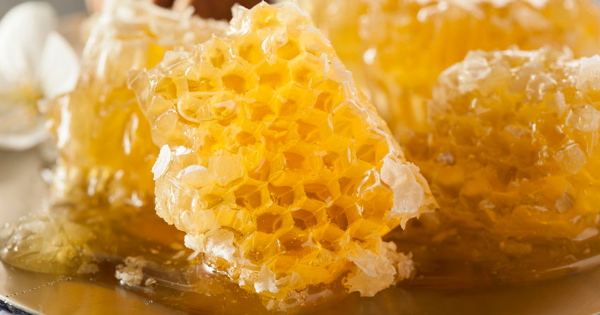 Consuming honey, nature's sweet gift freely given through the work and movement of honeybees, gets sweeter in light of its wide-ranging health benefits

For your cup of freshly brewed tea or to sweeten your homemade desserts, do you tend to reach for honey instead of the usual table sugar? The two may offer similar levels of sweetness, but science is quick to favor honey for its wholesome health benefits versus those of various other natural sweeteners around.

Honey is produced by honeybees from the nectar of flowers as food. For humans, it's also a whole food source that contains amino acids as well as vitamins and minerals, including thiamin, riboflavin, niacin, vitamin A, vitamin C and vitamin E.[i] The mix of the nutrients varies based on the plants the bees visited.

It contains abundant active biological constituents such as polyphenols, which are nutrient-dense phytochemicals that boast antioxidant properties.[ii]

Honey is made up of around 40% fructose, compared with the 50% fructose found in table sugar and the 40% to 90% in high-fructose corn syrup, which sweetens many processed foods in the standard Western diet today.[iii] Heavy fructose intake has been linked to many prevalent issues today, from liver to metabolic diseases. This means that lower fructose content in honey offers more health advantages.

A 2004 study that compared honey to dextrose and sucrose, for instance, concluded that natural honey was able to lower plasma glucose, C-reactive protein and homocysteine in healthy, diabetic and hyperlipidemic participants.[iv]

Separate research confirmed, too, that honey more effectively promoted lower weight gain, adiposity and triglycerides than sucrose.[v] Now let's have a closer look at the advantages that honey offers for wellbeing:

Bee medicine, which uses bee products such as pollen, propolis and honey, has been popular in folklore for centuries and is now a rising star of anti-allergy therapy. A randomized, placebo-controlled trial in Malaysia studied the complementary effect of ingesting a high dose of honey on allergic rhinitis, in addition to standard medications.[vi]

It divided 40 patients with allergic rhinitis equally into two groups: one ingesting 1 gram (g) per kilogram (kg) body weight of honey every day for four weeks, and another receiving the same dose of honey-flavored placebo. Both groups received 10 milligrams (mg) of loratadine daily for four weeks.

While both groups progressively improved their symptoms at week four, only the honey group showed continuing improvement at week eight. It's also the only group that significantly improved in individual symptoms, persisting for a month after the treatment ended.

Research from 2014 revealed that honey may provide a natural alternative to anti-flu medications, one without the nasty side effects linked to this class of drugs.[vii] Testing a commonly researched H1N1 influenza strain called A/WSN/3, the study exposed virus-infected cells to different kinds of honey, such as manuka, soba, kanro, acacia and renge.

The results demonstrated that honey, manuka honey in particular, had strong inhibitory activity against the flu virus and provided "a potential medicinal value." This study is one of hundreds today that vouch for the role of natural compounds in preventing infection as well as reducing mortality rates against influenza.

Honey helped reduce the overall amount of cholesterol and fats in the bloodstream in healthy young adults.[viii] This was shown by a study published in August 2018 as a collaborative effort between researchers from Iran's Isfahan University and Mashhad University.

In the study, which recruited 60 subjects and assigned them to honey or sugar groups, the researchers compiled these findings:

Among the much-promoted benefits of honey is wound healing, as found in different studies:

A 2010 human study found that long-term consumption of honey might positively affect the metabolic consequences of Type 1 diabetes, such as possible beta cell regeneration as indicated by climbing fasting C-peptide levels.[xiv]

"This small clinical trial suggests that long-term consumption of honey might have positive effects on the metabolic derangements of type 1 DM [diabetes mellitus]," wrote the researchers in this study that recruited 20 patients of both sexes ages 4 to 18. To appreciate an entire list of honey's health benefits, head over to our honey research page. 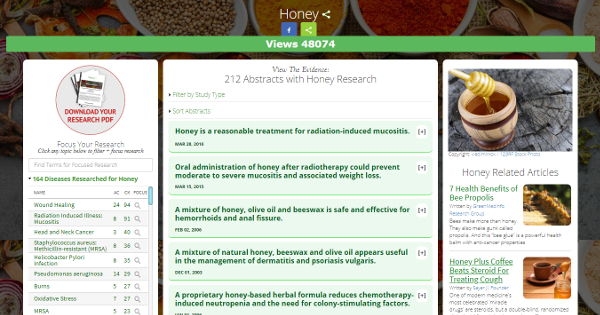