The Real Reason Downward-Facing Dog is so Good for You 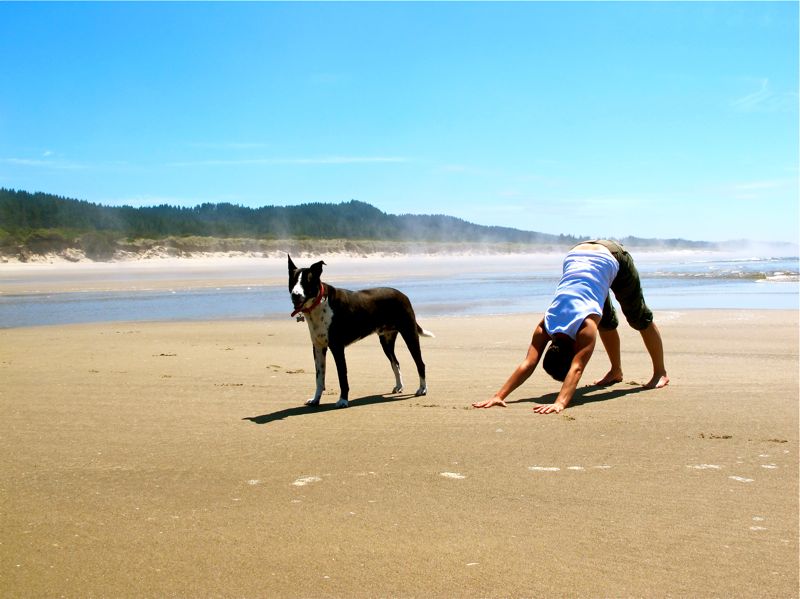 Downward-facing dog is the most ubiquitous pose in yoga. Interestingly, the ancient Chinese art and science of acupuncture can help explain why

This popular yoga pose is the one we see in advertisements and movies, on yoga DVDs, and the covers of health and fitness magazines. Downward-facing dog is taught in beginner yoga classes and returned to again and again by the most advanced yoga practitioners.

Almost everyone who has tried yoga, no matter their skill level, is familiar with downward-facing dog. Even people who have never set foot on a yoga mat can visualize the pose, known in Sanskrit as adho mukha svanasana.

Downward-Facing Dog Has Your Back

From an acupuncture perspective, downward-facing dog has gained its rightful place at the top of the yoga-pose heap because it activates the Bladder channel. 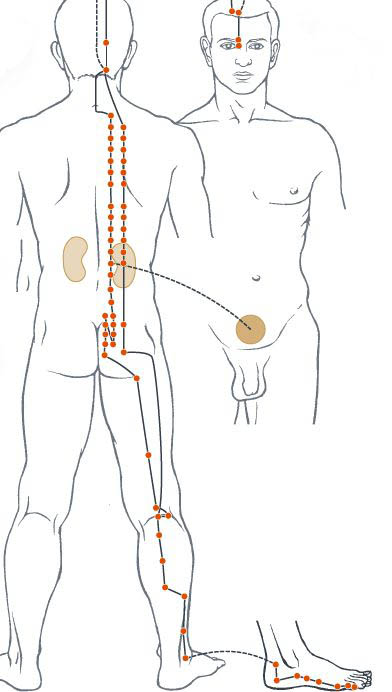 The Bladder channel, sometimes referred to as tai yang, is the longest channel in the body. It has 67 acupuncture points that run from the inner eye, up and over the head, down the entire spine and posterior leg, along the side of the foot and ending at the pinkie toe (see picture at right).

The location of the Bladder channel is significant because the back in acupuncture is considered the most yang--the most external, superficial--part of the body. It is our initial connection with the outside world.

The Bladder channel, since it takes up such significant territory on the back, is our first line of defense against invaders from the external environment--cold, wind, germs, pollen, etc. For this reason, points along the Bladder channel are frequently selected to get rid of cold and flu symptoms, and to boost immunity.

The Secret to Understanding Downward-Facing Dog's Many Benefits

The large surface area covered by the Bladder channel means that its applications extend beyond immunity. The Bladder channel is used to treat a very wide range of conditions, including pain in any part of the body that's located along its route--headaches; neck pain; upper, mid and low back pain; pulled hamstrings; calf strains; and foot pain.

But even more than size or location, the reason the Bladder channel is so important to overall health--and the reason downward-facing dog is such a gem of a yoga pose--is because it contains what are known in acupuncture as the Back Shu points.

Each of the body's organs has its own Back Shu point and they are all located along the Bladder channel. Shu in Chinese means "to transport," as in transport qi (or blood, or fluids, or whatever's needed) to the organ associated with that point.

Back Shu points are used diagnostically and as treatment points.

Acupuncturists often palpate these points to gather information about which organ system is involved in a person's symptoms. If a certain point is tender, or noticeably raised or depressed, it may indicate that something's going on with that point's corresponding organ. Once a diagnosis has been determined, Back Shu points may be needled directly.

The Back Shu points are traditionally associated with treating chronic diseases, so pretty much anything you can think of that's not related to an acute injury--anxiety, irritable bowel syndrome, menstrual irregularities, asthma, incontinence, migraines, insomnia, etc. Many acupuncturists think of Back Shu points as going to the source, the most direct way of affecting a particular organ.

The bottom line is this: The Bladder channel covers a lot of ground, both in terms of size and function. Smooth flow throughout the channel is critical to achieving optimal health and at the same time challenging to maintain since there's a lot that can go wrong.

Downward-facing dog is unique in its ability to engage, in one fell swoop, acupuncture's largest and most all-encompassing channel. For the remaining few who haven't already, it's time to strike this pose.

For additional research on the evidence-based health benefits of acupunture and yoga, visit our database sections on the topic below:

Sara Calabro is the founding editor of AcuTake, an online publication dedicated to improving acupuncture education and access. She also blogs for The Huffington Post, and is a contributing writer for Acupuncture Today and the author of Acupuncture Matters. The increased demand for acupuncture being generated by Sara's work led to the creation of the AcuTake Acupuncturist Directory. She is a board-certified acupuncturist, licensed in New York and Oregon.