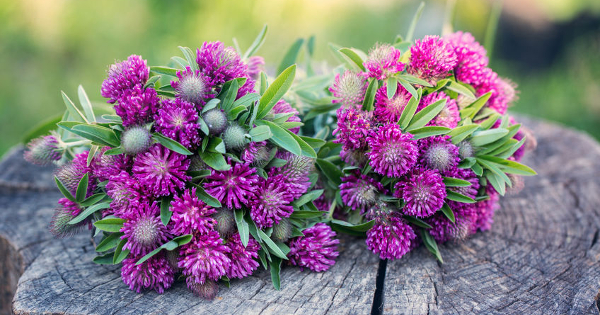 Red clover, a native flowering plant found in Europe and Asia, is the source of many health benefits, including the abilities to beat inflammation and lower oxidative stress.

Infections, allergies, and autoimmune diseases upset the balance of your cells, which leads to inflammation, and major diseases associated with aging, such as heart attacks, stroke, cancer and Type 2 diabetes. Neurodegenerative conditions like Alzheimer's and Parkinson's show increased oxidative stress and inflammation as well.[i] It is not surprising that current interest in red clover and its healing elements is rising.

One of the key elements of red clover is formononetin, a dietary isoflavone, which is helpful in controlling diseases that are thought to be caused by inflammation and oxidative stress, such as diabetes, obesity and metabolic syndrome.[ii]

A treatment with formononetin controlled hypoglycemia and significantly reduced insulin resistance and oxidative stress in sciatic nerve tissue in diabetic animal research, making it an effective candidate for treatment of Type 2 diabetic neuropathy.[iii]

Red clover sprouts (high in formononetin) reduced metabolic syndrome by decreasing obesity, lowering blood glucose levels and improving the lipid metabolism in obese mice that were given a high-carbohydrate and high-fat diet.[v]

Red clover isoflavones, such as formononetin, decreased total cholesterol by 29% in a meta-analysis covering 12 studies of 910 peri- and postmenopausal women.[vi]

Red clover isoflavone supplementation for 90 days also improved the lipid profile (significant decreases in total and low-density lipoprotein cholesterol) of 88% of the 60 postmenopausal women studied who had an increased body mass index.[viii]

In addition, formononetin ameliorated myocardia ischemia/reperfusion injury (loss of oxygen to the heart, which prevents pumping, and when oxygen returns but injures tissues, respectively) in rats (as measured by cardiac dysfunction, infarct size and cardiac markers) and inhibited the inflammatory response by impacting the "reactive oxygen species-thioredoxin interacting protein-nucleotide-binding domain and leucine-rich repeat-containing protein 3" (ROS-TXNIP-NLRP3) pathway.[x]

In a mouse model, formononetin also exhibited significant anticancer effects in multiple myeloma cancers (found in plasma cells) and decreased inflammation (through the ROS-regulated inhibition of the signaling cascade of aberrant cells impairing the immune system, called STAT3 and STAT5).[xi]

Research affirms that formononetin isoflavones in red clover have cancer fighting benefits for breast, colorectal, ovarian,[xiii] bladder[xiv] and prostate cancers, decrease tumors and metastasis and interfere with inflammation-causing signals that allow cancer cells to grow and survive chemotherapy.[xv] In addition, formononetin has also shown neuroprotective properties by suppressing inflammation in the brain neurons of rats.[xvi]

Inflammation is involved in a host of diseases from obesity, atherosclerosis, and rheumatoid arthritis to cancer, neurological and cardiac diseases, and isoflavones, such as formononetin, show strong antioxidant, anticancer, antimicrobial and anti-inflammatory properties.[xvii]

Anthocyanins are pigment-related compounds found in red clover giving the plant its purplish color. These compounds fight both inflammation and oxidative stress.[xviii] Interest in anthocyanin pigments has intensified recently because of potential health benefits -- as dietary antioxidants to prevent neuronal diseases, cardiovascular illnesses, cancer, diabetes, inflammation and atherosclerosis -- and scientific progress in stabilizing the compounds by encapsulating them.[xix],[xx]

You produce less NRF2 (a regulator of oxidants) as you age and that interferes with NRF2's cross-talk with NF-κB, which then increases cytokine production (inflammatory proteins), which slowly tips the balance toward the oxidative side -- a condition known as oxidative stress.[xxii]

For example, it has been found that two cytokines, interleukin-1 and tumor necrosis factor-alpha, are produced in excess in rheumatoid arthritis where they create inflammation and tissue destruction.[xxiii]

It is no wonder that anthocyanins found in red clover are recommended as powerful natural antioxidants that help reduce inflammation, contribute to the health of connective tissue and are effective in defusing dangerous free radicals that can irritate body tissues and cause the inflammation and joint pain prevalent in arthritis.[xxiv],[xxv]

In a study of 88 healthy, overweight and obese children ages 6 to 10, urinary biomarkers of inflammation and oxidative stress were elevated in obese children and signaled endothelial dysfunction.[xxvi] This imbalance between dilation and constriction of the blood vessels determines blood pressure and how well the heart is pumping blood out to the body and can contribute to increased inflammation and various heart diseases.[xxvii]

In a randomized, double blind trial of 150 subjects with hypercholesterolemia, those who consumed a purified anthocyanin mixture (320 mg per day) showed improved lipid profiles and reduced inflammatory responses compared to those who took a placebo twice a day for 24 weeks.[xxviii] Dietary anthocyanin consumption was associated with a 15% reduction of Type 2 diabetes risk in a meta-analysis of 200,894 participants and 12,611 Type 2 diabetes cases.[xxix]

In a meta-analysis of 14 cohort studies of flavonoids, subjects taking anthocyanins showed significantly lower risk for cardiovascular disease as well.[xxx] Intake of foods/extracts rich in anthocyanin improved vascular health, as shown in a meta-analysis of 24 randomized-controlled trials; two measures (vascular reactivity and stiffness) were significantly improved.[xxxi]

Polysaccharide compounds in red clover (including glucose, galacturonic acid, arabinose and galactose) can be used as natural hypoglycemic agents and antioxidants. DPPH (2,2-Diphenyl-1-picrylhydrazyl) and ABTS (2,2′-azinobis-(3-ethylbenzothiazoline-6-sulfonic acid)) are stable free radicals that are used to measure the radical scavenging activity of antioxidants.

Red clover polysaccharides were found to be 87% as effective as acarbose (a current glucosidase inhibition drug used for Type 2 diabetes)[xxxii] and nearly as effective as an antioxidant (92% scavenging rate of DPPH radicals and 99% of ABTS radicals) as ascorbic acid or pure vitamin C.[xxxiii]