A Reflection on Antibiotics

Views 6221
Posted on:
Thursday, March 8th 2012 at 5:30 am
Written By:
Suzanne Humphries, MD
This article is copyrighted by GreenMedInfo LLC, 2018
Visit our Re-post guidelines 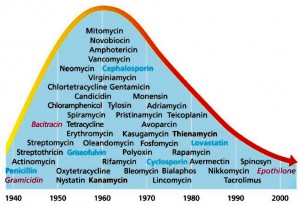 As you can see here, scientists are running out of options. Many drug resistant micro-organisms are no longer responding to the older drugs, and there are less and less new ones being developed. The only solution is to stop the rampant use of these largely unnecessary drugs

Antibiotics, antivirals and antifungals are among the most abused and overused pharmaceutical agents that contribute to human disease.  Louis Pasteur became famous for his "discoveries", and his contribution to the idea that germs could or should be killed.  The problem with this paradigm is that while germs do exist and can be killed, it is not the way to create a healthy living environment.  Most people are unaware that Pasteur was a political-celebrity pseudoscientist, who lifted much of his information from Antoine Bechamp, his contemporary, and true scholar.  Pasteur had a very poor understanding of the gestalt of living systems and in his hijacking of Bechamps information, which he couldn't have understood enough to even take credit for, he made some incorrect assumptions.  Nevertheless, like today, celebrity doctors and scientists, even then, made headlines and were adorned with respect that was wholly undeserved. For more information on Bechamp and Pasteur please read "Bechamp or Pasteur.  A lost chapter in the history of biology" by Ethel D Hulme.  You will be surprised and entertained by the information that was withheld from your history and science books.

Antibiotics contribute to the killing of many commensal organisms that are important for proper bodily homeostasis, immunity, digestion, metabolism and organ health.  Our bodies are dependent on a rich mixture of micro-organisms both inside and outside.  Sterilization is neither possible nor necessary.  The conventional approach to an imbalance of micro-organisms is to kill the "invader."  Sometimes this will appear to give temporary success, but most often the trouble will recur if there is no intervention into the whole system.

Sometimes the problem with antibiotics is painfully obvious, e.g. when a fungal infection or intestinal infection with "c-diff" takes hold after a course of antibiotics.  But the truth is, every course of antibiotics weakens the constitution and, if the beneficial micro-organisms that died off do not grow back or are not replaced, all sorts of degenerative diseases, including cancer, can evolve. Are you aware that approximately 70% of immunity lies within the bowels?  Now imagine the consequences of wiping out populations of micro-organisms from the intestines, as a "side effect" of antimicrobial use.

Antibiotics can permanently kill off beneficial gut flora, which amongst other things, leads to far worse bacterial infections than the one being "treated" in the first place.  Antibiotics are infamous for creating superbacteria which then turn and potentially bite everyone, including those who don't use antibiotics. For this reason, Dr Humphries will not prescribe antibiotics and would not recommend them except under dire, truly life-threatening circumstances.  Instead, creating a healthy background where infection cannot take hold is the aim.  Disease cannot live in healthy terrain.  This is a truth that has been demonstrated time and again in plant and animal life. Most doctors are unaware of this problem because it is denied in the conventional medical system.  Instead, drugs are prescribed to try to rectify the problems that later occur after a seemingly successful course of antibiotics are completed.

There are myriad ways to deal with imbalances that lead to altered bacterial and fungal balance in the body such as urinary tract infections, chronic diarrhea, sinusitis and just about all seeming infections.  Often the cure does not happen overnight like the apparent effect of an antibiotic, but with the approach of strengthening the whole body, the infection will retreat on its own.  This approach often takes discipline and willingness to give up addictive habits.

Strengthening the bowels in people who have had antibiotics in the past is also possible.  If you would like a holistic approach to an issue diagnosed as an infection, please schedule a consult.  Chances are, there are many things you can do to bring yourself back to a higher state of health.

For relevant research on GreenMedInfo.com, click the following links:

Blog Entry: Probiotics And Mitochondria: Bacteria Are Not "Other"

[Dr. Humphries is on the board of directors of the International Medical Council on Vaccination.]