Reports of COVID Vaccine Injuries Pass 1 Million Mark, FDA Signs Off on Pfizer Booster for Kids 12 and Up 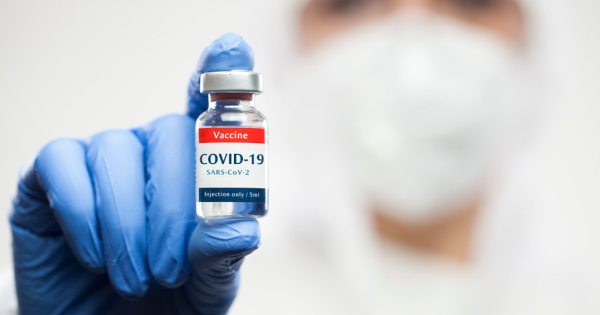 The Centers for Disease Control and Prevention on Dec. 31, 2021, released new data showing a total of 1,000,229 reports of adverse events following COVID vaccines were submitted between Dec. 14, 2020, and Dec. 24, 2021, to the Vaccine Adverse Event Reporting System (VAERS). VAERS is the primary government-funded system for reporting adverse vaccine reactions in the U.S.

Foreign reports are reports received by U.S. manufacturers from their foreign subsidiaries. Under U.S. Food and Drug Administration (FDA) regulations, if a manufacturer is notified of a foreign case report that describes an event that is both serious and does not appear on the product's labeling, the manufacturer is required to submit the report to VAERS. 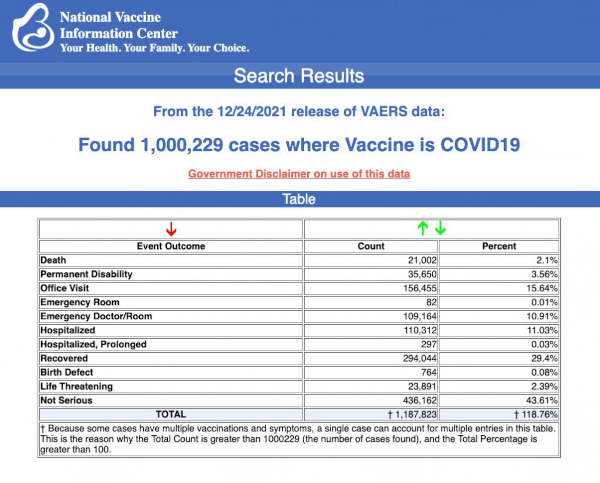 Every Friday, VAERS publishes vaccine injury reports received as of a specified date. Reports submitted to VAERS require further investigation before a causal relationship can be confirmed. Historically, VAERS has been shown to report only 1% of actual vaccine adverse events.

The most recent death involves a previously healthy 15-year-old girl from Wisconsin (VAERS I.D. 1963633), who experienced a cerebral and intraventricular hemorrhage secondary to a ruptured aneurysm. She also tested positive for SARS-CoV-2 despite having been fully vaccinated.

The FDA today amended Emergency Use Authorization (EUA) for Pfizer's COVID vaccine expanding eligibility for boosters to children 12 through 15 years of age.

The agency did not consult its expert panel of vaccine advisors, who in September, overwhelmingly rejected boosters for healthy people 16 and older.

The FDA also shortened the time for both adolescents and adults to receive a booster from six months to five months after receiving a second dose and authorized a third shot for immunocompromised children aged 5 to 11.

Dr. Peter Marks, director of the Center for Biologics Evaluation and Research at the FDA, said in a statement the agency made its decision because a third dose "may help provide better protection against both the Delta and Omicron variants."

The FDA said it reviewed real-world data from Israel of more than 6,300 individuals 12- to 15-years-old who received a booster at least five months after their second Pfizer dose and found no serious safety concerns.

Likewise, additional data showed no problems giving anyone eligible for a Pfizer booster an extra dose at five months instead of six, the Associated Press reported.

The FDA said it will continue to review the information and communicate with the public if data emerges suggesting booster doses are needed for the younger pediatric population.

Dr. Michelle Perro, pediatrician and co-author of "What's Making Our Children Sick," disagreed with the FDA's decision, pointing out that "children are not mini-adults." In an email to The Defender, Perro said children's rapid growth, quick cellular turnover and less efficient detoxification pathways are factors that must be considered whenever any new therapeutics are being introduced.

"This newest immunomodulating therapy, the mRNA inoculation, has already been shown to have produced multisystem negative health outcomes in children garnered from the CDC's own database."

Perro outlined five reasons she believes this "experimental therapy" must be immediately withdrawn:

She also said the FDA is "veering from" its own historical stance.

"When previous true vaccines were introduced historically (rotavirus vaccine), after just a few cases of adversity, they were immediately withdrawn," Perro told The Defender. "The FDA must adhere to its own historical position regarding their assigned task of the protection and oversight of our country's greatest asset: our children."

Fauci says hospitalization numbers for kids with COVID are overcounted

Speaking to MSNBC's Ayman Mohyeldin, who was filling in for Rachel Maddow on Dec. 29, about the rise in hospitalizations among children amid the Omicron variant, Fauci said the surge is due to two contributing factors -- more children getting infected and the way COVID cases are counted.

"And what we mean by that -- if a child goes in the hospital, they automatically get tested for COVID. And they get counted as a COVID-hospitalized individual," Fauci said. "When in fact, they may go in for a broken leg or appendicitis or something like that. So it's overcounting the number of children who are, quote, 'hospitalized with COVID,' as opposed to because of COVID."

Secretary of Defense Lloyd Austin tested positive for COVID, and will remain at home for the next five days "in accordance with new CDC guidelines."

In an emailed statement released Sunday night, Austin said he is fully vaccinated and received his booster dose in October, which he claimed made the infection "much more mild."

Austin said vaccines work and will remain a medical requirement for the military's workforce. A lawsuit challenging the military's COVID vaccine mandate is working its way through the courts, and plaintiffs on Dec. 10 filed an amended complaint seeking a new injunction against the requirement until the court rules on the case.

People getting unapproved fourth and fifth doses of COVID boosters

Some people with compromised immune systems are sidestepping government guidelines to receive unapproved fourth or fifth COVID shots, despite uncertainty about their safety or effectiveness, The New York Times reported.

The CDC in October 2021 updated its guidelines, allowing immunocompromised people to receive a fourth dose six months after a third, but the earliest eligibility for a fourth dose would be late February.

In order to administer COVID vaccines, medical providers must sign a legal agreement with the CDC that states they could be kicked out of the vaccination program or face prosecution for breaking the agency's rules.

Yet, the government has not enforced compliance with regulations and seems unlikely to pursue punishments for most providers, according to legal experts.

Israel has already begun administering fourth doses, becoming the first country in the world to roll out additional shots.

Prime Minister Naftali Bennett announced on Sunday the country would offer a fourth dose to individuals with weakened immune systems, people aged 60 and over and medical workers who had their last jab at least four months ago.

Novavax files data with FDA for Emergency Use Authorization

Novavax last week filed final data with the FDA for its COVID vaccine, fulfilling the final prerequisite to apply for EUA of NVX-CoV2373, the company's recombinant nanoparticle protein-based COVID vaccine with Matrix-M adjuvant.

If all goes well, the Maryland-based biotech company expects to submit a request for EUA in the U.S. in one month in accordance with FDA guidance.

"Novavax is committed to delivering our protein-based vaccine in the United States, where the COVID-19 pandemic continues to evolve with the emergence of new variants," Stanley Erck, president and CEO of Novavax, said in a statement.

Novavax is partnering with the Serum Institute of India, one of the largest vaccine manufacturers in the world, and uses the COVID spike protein pulled from the very first strain of the virus. The company boasts a vaccine efficacy of about 90%.

Children's Health Defense asks anyone who has experienced an adverse reaction, to any vaccine, to file a report following e.