Views 14865
Posted on:
Tuesday, February 11th 2020 at 7:45 am
Written By:
Sayer Ji, Founder
This article is copyrighted by GreenMedInfo LLC, 2021
Visit our Re-post guidelines

Could the ballooning rate of sick pets, and a burgeoning multi-billion dollar veterinary industry, relate to the immunocompromising role of feline retrovirus-contaminated vaccines given to millions of animals around the world?

A highly concerning study published in Biologicals entitled, “Endogenous retroviruses as potential hazards for vaccines,” revealed that manufacturing processes employed for animal vaccines have virtually no safeguards against contamination by surreptitious retroviruses which are present within the master seed stock of cells used to produce them. As stated in the study:

"Many live attenuated vaccines for animals are manufactured by using cell lines from animals, which are known to produce infectious [endogenous retroviruses] ERVs; however, the risks of infection by ERVs from xenospecies through vaccination have been ignored,[1] and which may contribute to, or cause, serious diseases like cancer in exposed populations.

Specifically, the study looked at the potential for contamination of veterinary vaccines with a feline virus associated with leukemia in cats. Given the fact that feline leukemia is the primary cancer diagnosed in cats, the new study may provide a clue to why our pets are undergoing this modern day epidemic. 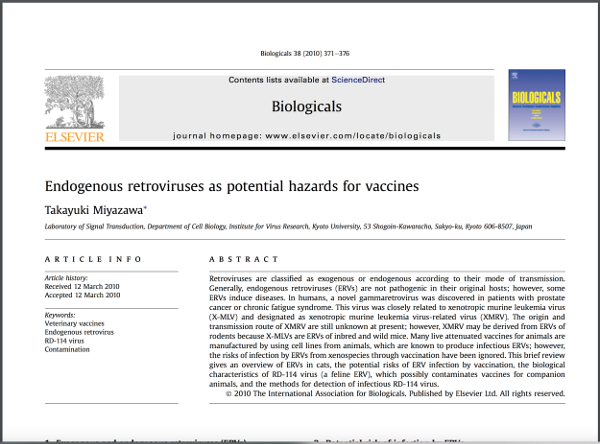 Today’s vaccine manufacturing process, both for veterinary and human vaccines, is still dependent on use of live animal and human cells (diploid, fetal) as master seed stock. In fact, many of these manufacturing processes were developed long before the discovery of reverse transcriptase (1970) and the chemical structure of DNA (1953), making the true risks of using living cells contaminated with DNA and retroviruses unknowable at the time (these include irrevocably inserting foreign animal DNA into a host somatic and germline cells). While so-called capsid or surface antigen techniques, and genetically modified vaccines (which do not contain live cell components) are now replacing these older techniques, presumably in (tacitly acknowledging the safety concerns associated with live cell based techniques), the present-day CDC schedule still contains cell based vaccines (including human fetal cells lines). And the veterinary vaccine market is almost entirely animal cell based.

Given the widespread use of these cells, it is conspicuous how little attention is placed on their contamination with endogenous retroviruses. This may have to do with the fact the original polio vaccines were contaminated with a potentially carcinogenic simian monkey retrovirus known as simian virus 40 or SV-40, a highly controversial topic which we explore in our previous expose’ “What Really Caused The AIDS Epidemic?” Moreover, research indicates that the Rotateq vaccine contains not one but two simian retroviruses of as of yet unknown origin, and pathogenicity. This on top of the already well characterized porcine circovirus discovered in them in 2011. Yet still there is little if any oversight or research being done into what their unintended, adverse effects are to health.  As discussed in a recent article by Judy Mikovitz, titled, “Retroviruses: Poorly Understood Agents of Change”

"As just one example among hundreds of retrovirus contamination of vaccines, take a look at the history of the rotavirus vaccine. In 2010, the Food and Drug Administration (FDA) convened a panel of experts to review findings that rotavirus vaccines given to infants in the U.S., Rotateq, produced by Merck Pharmaceuticals and Rotarix produced by Glaxo Smith Kline, are contaminated with pig viruses. Rotarix, an orally administered rotavirus vaccine, contained nucleic acids from porcine circovirus-1 (PCV1) virus and RotaTeq has been shown to contain nucleic acids from both PCV1 and PCV2, a pathogen in pigs that is associated with wasting and immunodeficiency. While acknowledging that the entire short and long-term risks from the porcine circoviruses PCV1 and PCV2 are as yet unknown, the advisory panel decided that “the benefits of the vaccine trumps its risks.

How Did The Vaccines Become Infected with Retroviruses?

The genomic infrastructure of mammals contain a large number of retroviral sequences (~8% of their DNA is retroviral in origin),[1] originated from ancient retroviral infections that incorporated into the species’ germlines, and which became benign or at least completely suppressed (inactive) components of our DNA over the course of hundreds of thousands of years of evolution (a process known as endogenization). Retroviruses are generally harmless, and can be consider co-passengers within the human genome and microbiome.

However, these “dormant” retroviral sequences can become active again and potentially harmful when exposed to cells of other species and a crossover event — or “xenospecies infection” — occurs, and they occupy and infect another species. At this point, these ‘resurrected’ retroviral sequences can lead to a disruption of immune function,[2] as well as contributing to benign lesions and malignant cancer (more details on this below in the discussion of feline virus).

How Would Such a Crossover Event Occur?

Both the vaccine manufacturing process, as well as the administration of vaccines containing cell components from species that are injected into different ones, makes for a perfect opportunity for such an event. The study makes mention of this possibility:

"Many live attenuated vaccines for animals are manufactured by using cell lines from animals, which are known to produce infectious [endogenous retroviruses] ERVs; however, the risks of infection by ERVs from xenospecies through vaccination have been ignored. This brief review gives an overview of ERVs in cats, the potential risks of ERV infection by vaccination, the biological characteristics of RD-114 virus (a feline ERV), which possibly contaminates vaccines for companion animals, and the methods for detection of infectious RD-114 virus.

How did we first come to understand the dangers of xenospecies infection with ERVs?

The study mentions a classical example of ERV dangers: namely, harms caused by xenotransplantation of pig organ or tissues into humans:

"Technical innovation of animal engineering enables us to develop genetically engineered pigs for the purpose of xenotransplanting pig organs or tissues to humans; however, pigs have replication- competent ERVs, termed porcine ERVs (PERVs) [17]. The discovery of PERVs able to infect human cells led to the halt of the clinical trials of xenotransplantation, and the risks of PERVs in xenotransplantation have been investigated extensively.

Other historical examples of infectious ERVs mentioned are:

In the veterinary science area, at least mice, pigs, cats and chickens have infectious ERVs. Many live attenuated vaccines for animals are manufactured by using cell lines from these animals. In addition, several live attenuated vaccines are manufactured by using cells which are known to produce infectious ERVs; however, the risks of infection by ERVs from xenospecies have been ignored. 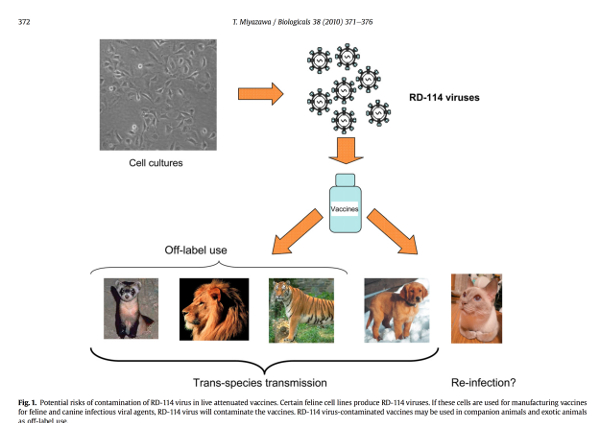 The Cat Is Out of the Bag

The study next focused in on cat ERVs, of which there have been a number identified:

“At least two ERVs, endogenous FeLV and RD-114 virus, are present in the cat genome. In addition to these ERVs, two additional ERVs have been reported.”

The RD-114 virus is of special concern because is found within a wide range of vaccines for canine vaccines, as well as “off label” use in zoos for other exotic animals, and is of course also potentially re-infecting cats whenever administered to them.

It is of considerable importance to note that the so-called “feline” RD-114 virus was first isolated from a human tumor cell line that was ‘passaged,’ or previously exposed, to fetal cats. Presumably, the fetal cat cells contained the RD-144 provirus which when exposed to the human tumor cells provided it an opportunity to “cross over,” i.e. become xenotropic. Considering the close proximity of humans to domesticated cats, or animals like dogs that are now vaccinated and presumably infected with RD-114 virus, there is a clear human health risk, as the precedent for its human specific infectivity was set from the moment the virus was discovered:

"RD-114 was first isolated from a human tumor cell line (RD cells) derived from a human rhabdomyosarcoma after passage through fetal cats, and is thought to be xenotropic, i.e., RD-114 virus does not productively infect feline cells. However, RD-114 virus is known to infect several feline cell lines [1,4] in addition to cell lines from xenospecies such as humans and dogs; therefore, RD-114 virus is polytropic, but is not strictly xenotropic in vitro. In human cell lines, RD-114 virus interferes with BaEV, simian retroviruses 1, 2, 3, 4 and 5 (primate betaretroviruses), avian reticuloendotheriosis virus, and duck spleen necrosis virus; therefore, these retroviruses are considered to utilize the same receptor in human cells. In 1999, two groups independently identified the receptor for this large interference virus group [13,18].

Indeed, another 2010 study published in the Journal of Clinical Microbiology found that an infectious feline endogenous retrovirus, or what they named RD-114 related virus, contaminated about one-third of the 25 commercially available vaccines tested (3 dog and 5 cat).[3] The authors concluded:

In conclusion, our study suggests that the presence of infectious ERVs should be taken into consideration when assessing the purity of live attenuated veterinary vaccines. The methods currently employed to screen veterinary vaccines for retroviruses need to be reassessed.

ERVS Infecting Not Just Cats, But Dogs, and Humans

Studies have looked at the potential for feline ERVs to ‘jump’ across the species barrier to humans, and the findings while inconclusive, do not rule out this possibility.[4] It is believed that co-inhabitation can lead to cross-species infectivity between pets, pests, and humans, which is something that has been theorized to account for the presence of mouse mammary tumor virus in malignant human breast cancer, as well.[5] Though I think its an equally likely explanation that the MMTV crossover event between mice and humans could be related to laboratory, vaccine, or biological medicine related contamination[2].

Indeed, the problem of vaccine contamination, as well as other biologicals, is widespread.

In another 2013[6] study the researchers mentions the findings of UK and Japanese researchers who confirmed the presence of a feline ERV in both cat and canine vaccines:

The study also mentions the likelihood of ERVs in human vaccines such as MMR:

In previous studies, it was reported that MMR vaccines (measles, mumps and rubella vaccines) and yellow fever vaccines that were propagated in chicken embryos were contaminated with endogenous avian leukosis viruses (ALVs) and endogenous avian retroviruses (EAVs), which originate from chicken embryonic fibroblast substrates [16, 45[3]].

The truth is that any vaccine produced through animal, insect, and even plant cells, carries a risk for surreptitious viral contamination with endogenous retroviruses. The fact that present-day vaccination manufacturing processes were developed before the discovery of reverse transcriptase, helps to explain how such a profound lack of oversight and understanding of retroviral contamination is operative today within the global vaccine agenda. The safety issues, which could not have been foreseen at the relatively primitive state of scientific learning that the founders of modern day vaccinology and immunology were at, continue to haunt those both at the giving and receiving end of vaccination programs. Thankfully, the research is finally coming into the light of day.

Get free access to the upcoming Docu-series to learn how to protect your pets from unnecessary suffering! Starts on March 5th. Get your free spot here.