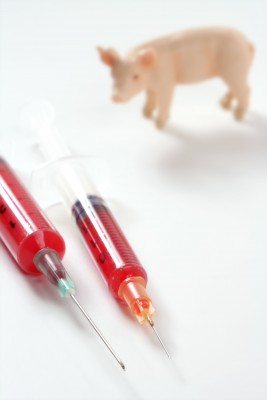 A new investigation into pig virus contamination in human vaccines has revealed that both circovirus type 1 (PCV1) and 2 (PCV2) DNA are still present in vaccines developed against infant and childhood rotaviral gastroenteritis, and which since 5 June, 2009, the World Health Organization has recommended be included in all national immunization programs.

As a parent how do you feel about that?

Of course, PCV1 is not believed to infect humans, despite commonly being found in the feces of those who consume pork. It is also not believed to cause harm to pigs. But PCV2 virus, which infects pigs worldwide, has been identified to precipitate a potentially fatal condition in piglets known as postweaning multisystemic wasting syndrome (PMWS), which causes a progressive loss of body condition, lung damage associated with difficulty breathing, visibly enlarged lymph nodes, and sometimes diarrhea, pale skin and jaundice.

The well known malignancy of PCV2 in pigs caused the FDA, on 22 March 2010, to recommend doctors suspend the Rotarix vaccine, one of two licensed for rotavirus on the market, due to PCV1 DNA contamination. Further testing revealed that the other licensed vaccine, RotaTeq, had both PCV1 and PCV2 DNA contamination. Despite these findings, the FDA chose to disregard the precautionary principle and after a "careful scientific review" determined that both Rotarix and RotaTeq vaccines were safe. It is quite telling that one of the patent holders of the RotaTeq vaccine, Dr. Paul Offit, was quoted as saying that an infant has a theoretical capacity to respond [safely] to about 10,000 vaccines at any one time." Given the quite possibly insane perspective of this nationally acclaimed "expert" on vaccine safety, is it any wonder the health and well-being of precious infants and children is being treated with callous disregard?

The first myth to dispel is that porcine coroviruses are incapable of infecting humans. A study published in 2011 in the journal Vaccine titled "Productive infection of human hepatocellular carcinoma cells by porcine circovirus type 1," proved that a human cell line can be infected with PCV1. A 2005 study in the journal Xenotransplantation found that human white blood cells are susceptible to PCV1 infection, raising safety concerns associated with transplantation procedures involving pig tissue. Another, more extensive study published in 2004 in the same journal demonstrated experimentally that both PCV1 and PCV2 gene expression and replication can take place in human cells.

Given these findings, if the FDA’s "scientific" justification for allowing millions of infants and children to be exposed to PCV1 and PCV2 DNA and possibly live viruses is that "they can not infect humans," they are now compelled to correct their mistake or be found guilty of both risking the health and well-being of our children, as well as violating the medical ethical principle of informed consent.

Some additional PCV2 research to consider...

Back in 2009 the journal Clinical and Vaccine Immunology demonstrated that vaccinating pigs with PCV2 actually resulting in infecting them with the virus! In their own words: "The results from this study indicate that vertical transmission of PCV2 can occur in PCV2-vaccinated dams."

Another study published in the journal Nutrition titled "Birth abnormalities in pregnant sows infected intranasally with porcine circovirus 2" found the intranasal inoculation of pregnant sows with PCV2 resulted in abortion and reproductive failure.

What is most disconcerting about the contamination of vaccines intended for infants and children with pig viruses is that zoonotic (viruses from animals) are well known to be more malignant than viruses with a long history of host-virus evolution. Remember the global hysteria over "avian flu," and "pig flu"?

When cross-species transmission of a virus does occurs, due largely to manmade circumstances, e.g. Concentrated Animal Feeding Operations (CAFOs), vaccine production and administration, a virus which may cause no harm in the animal within which it is naturally found, may be highly lethal to the animal it has been introduced into through direct (e.g. vaccine) or indirect (factory farmed food) exposure.

One thing is for sure: intentionally administering vaccines with pig virus DNA, as well as possibly viable pig virus, into healthy children to "prevent" disease is clearly insane behavior, or at the least reflects a callous lack of concern for the health and wellbeing of those being "treated."

Another insurmountable problem is that rotavirus vaccines can cause the very gastroenteritis they are marketed to prevent, as well as a more serious medical condition known as intussusception, where a part of the intestine collapses into itself (like a telescope), sometimes causing deadly obstructions.1