Saffron: A Safe and Effective Treatment for Postpartum Depression 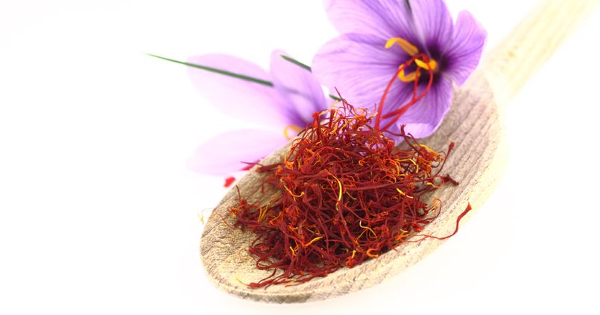 Depression is a common health condition, with few conventional treatment options. Forced to choose between talk therapy and medication, many people choose to be treated with drugs. But what about new mothers, whose desire to breastfeed means they are not candidates for psychiatric meds? Nature is providing hope in the form of a delicate flower: saffron

Postpartum depression is a mood disorder that affects as many as 1 in 7 new mothers. Characterized by deep mood swings, low energy, and a loss of interest in daily activities, postpartum depression may be caused by the sudden drops in estrogen and progesterone that occur in a woman’s body immediately after giving birth.[1]  Currently, the only approved medical treatments for postpartum depression are talk therapy and psychiatric medications. If a mother wishes to breastfeed, the pharmaceutical path is contraindicated due to contaminating breast milk with medication metabolites. Now, thanks to an exotic spice, there is another choice that demonstrates the power of nature to heal from within.

In December 2017, the journal Phytomedicine published the results of a clinical trial on saffron stigma for treating mothers suffering from postpartum depression. Saffron stigma are crimson-covered threads that are produced by the flowers of Crocus sativus L., commonly referred to as “saffron crocus.” A highly valued cooking spice, saffron is one of the world’s most expensive spices by weight.[2] Beyond saffron’s delicate flavor, often described as sweet and “hay like”, and rich golden hue used in traditional dyes, saffron’s use as a medicinal herb has been documented for more than 4,000 years. 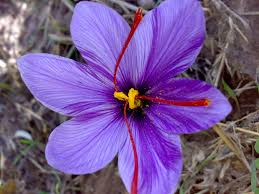 In this study, researchers wanted to identify a non-pharmaceutical treatment option for breastfeeding mothers suffering from mild-to-moderate postpartum depressive disorder (PPD). A double-blind, randomized, placebo-controlled trial was conducted on 60 new mothers diagnosed with PPD using the Beck Depression Inventory-Second Edition (BDI-II). Participants were randomly assigned to either saffron or placebo group, with saffron group receiving a 15-mg per day dose of the powdered herb. After 8 weeks, new BDI-II scores were taken and compared to the baseline scores. Results showed that the saffron group experienced a 96% remission rate for postpartum depression, more than double the remission rate of placebo group. BDI-II scores decreased significantly for the women consuming saffron (from 20.3 ± 5.7 to 8.4 ± 3.7), while the placebo group experienced only a modest decrease in symptom scores (19.8 ± 3.2 to 15.1 ± 5.4). Researchers concluded that saffron can have a safe and significant mood-elevating impact for those suffering from postpartum depression who want to safely breast-feed their newborns.[3]

Other researchers have produced similarly encouraging findings about saffron’s potential as a natural antidepressant. A 2014 meta-analysis titled “Saffron for depression: a systematic review of clinical studies and examination of underlying antidepressant mechanisms of action” analyzed six studies on saffron for treating depression. Researchers determined conclusively that “saffron had large treatment effects” on depression. When compared with antidepressant medications, saffron was found to have similar efficacy - without the side effects.  Saffron's antidepressant properties have been attributed to its “serotonergic, antioxidant, anti-inflammatory, neuro-endocrine, and neuroprotective effects.”[4]

Saffron’s impressive ability to elevate mood is backed-up by at least seven additional proven health benefits. Rich in B vitamins and manganese, adding this beautiful spice to your diet also provides a nutritional boost.

For additional research on natural benefits of saffron visit our database on the subject. 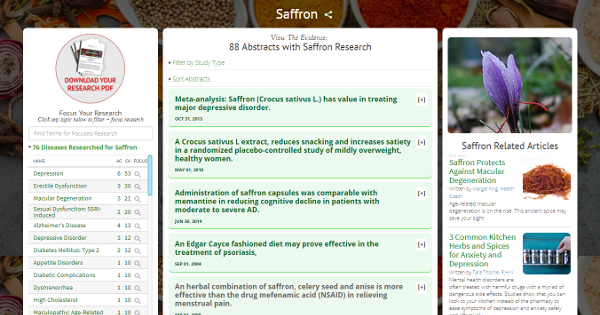