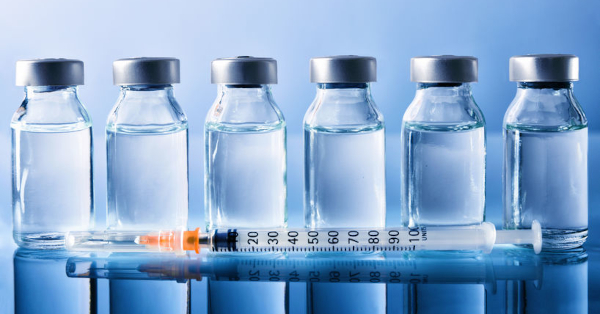 Proponents argue self-disseminating vaccines could mean they no longer have to run complex mass vaccination programs. Critics say the vaccines pose many health risks and would also spell the end of informed consent

A little more than a year later, when the Event 201 scenario morphed from "hypothetical" to concrete, it became clear that sponsors of the event intended to see the majority of the world vaccinated against COVID-19.

Accomplishing this goal is a "monumental challenge," however. In the U.S., more than one-third (38% to 45%) of adults continue to decline the unlicensed, Emergency Use Authorization injections, despite a marketing blitz that has included both carrots (ranging from the chance to win cash payments to a free order of fries) and sticks (such as nasty calls to "get personal" and "shun" the unvaccinated). 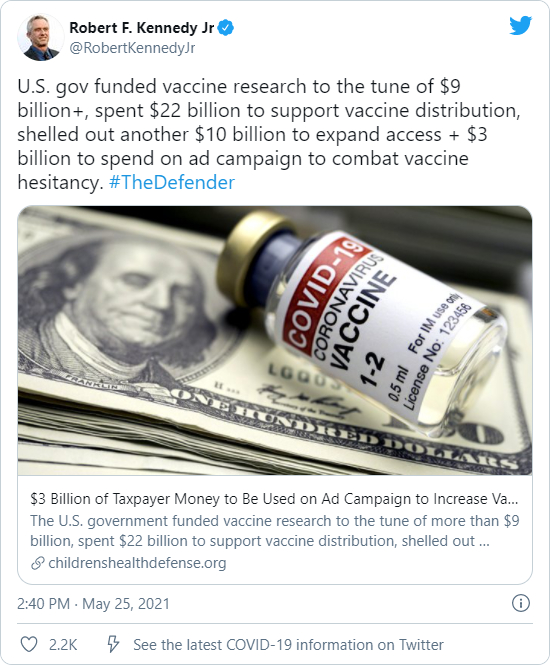 Although some of the uninjected tell pollsters they plan to eventually get the vaccine, a solid minority remains committed to never doing so. The same pattern appears to hold true globally: Roughly one-third of adults worldwide said they will not take a COVID shot.

While social and behavioral science researchers apply "soft science" techniques in an attempt to maneuver vaccine confidence into more acquiescent territory, bench scientists have a different option potentially waiting in the wings -- genetically engineered vaccines that "move through populations in the same way as communicable diseases," spreading on their own "from host to host."

In theory, self-spreading vaccines (also referred to as self-disseminating or autonomous) can be designed to be either transferable ("restricted to a single round of transmission") or transmissible ("capable of indefinite transmission)."

Vaccine scientists concede transmissible vaccines "are still not mainstream, but the revolution in genome engineering poises them to become so."

The makers of self-disseminating vaccines use recombinant vector technology to build genetic material from a target pathogen onto the "chassis" of a viral vector deemed "benign," "innocuous" or "avirulent." This is similar to the viral vector approach used to produce the Johnson & Johnson and AstraZeneca COVID vaccines.

For Johns Hopkins, the appeal of vaccines that are intentionally engineered to be self-disseminating seems obvious. The university's Center for Health Security made its case explicit in a 2018 report, "Technologies to Address Global Catastrophic Biological Risks." The report stated, "These vaccines could dramatically increase vaccine coverage in human …  populations without requiring each individual to be inoculated."

Further spelling out the utilitarian implications of self-disseminating vaccines, the report's authors stated, "only a small number of vaccinated individuals would be required to confer protection to a larger susceptible population, thus eliminating the need for mass vaccination operations."

From a programmatic standpoint, this strategy would have the advantage of being "cheaper than vaccinating everyone by hand." Perhaps even more significantly, however, it would override one of the "thorny ethical questions" that mass vaccination programs routinely wrestle with: informed consent.

As the university's Center for Health Security briefly acknowledged in its report, self-disseminating vaccines would essentially make it impossible for "those to whom the vaccine subsequently spreads" to provide informed consent at all.

Writing in 2020 in Nature Ecology & Evolution, researchers observed that viral zoonoses (diseases theorized to jump from animals to humans) have become an entrenched part of the "global mindset" and a central element of the pandemic-obsessed global health zeitgeist.

Despite SARS-CoV-2's unproven zoonotic origins (cast into doubt by figures such as Robert Redfield, former director of the Centers for Disease Control and Prevention), the past year's coronavirus hype has helped reinforce the popular perception that wildlife populations represent a menacing cauldron of latent viral threats -- requiring only the right set of circumstances to spring into humanity-endangering action.

Parlaying the COVID moment into a convenient scientific opportunity, researchers suggest that the purported "failure to contain the SARS-Cov-2 pandemic" furnishes a rationale for accelerating the rollout of self-disseminating vaccines. As some journalists have phrased the question du jour, "Wouldn't it be great if wild animals could be inoculated against the various diseases they host so that those microbes never get a chance to spread to humans?"

Transmissible-vaccine research also has ascended the list of funding priorities for government agencies like the Defense Advanced Research Projects Agency (DARPA) and the National Institutes of Health (NIH) and, reportedly, donors such as the Gates Foundation.

At least officially, the primary focus of self-spreading vaccine research has thus far been on wildlife populations. Although the practice of direct wildlife vaccination (for example, against rabies) has been around since the 1960s, it is the longstanding efforts to develop sterilizing vaccines in wildlife (euphemistically called "immunocontraception"), as well as recent advances in genetic engineering, that "have provided a foundation for transmissible-vaccine research."

Researchers explain how the targeting of wildlife reservoirs is intended to work:

"The idea, essentially, is to vaccinate a small proportion of a [wildlife] population through direct inoculation. These so-called founders will then passively spread the vaccine to other animals they encounter either by touch, sex, nursing, or breathing the same air. Gradually, these interactions could build up population-level immunity."

What could possibly go wrong?

As the Johns Hopkins report made clear in 2018, there is no technical reason why the self-spreading approach could not be applied to humans. The authors admitted to "several big challenges," however, including the fact that autonomous vaccines (as mentioned above) would render informed consent a moot point and would make it impossible to screen individuals for contraindications such as allergies.

According to Johns Hopkins and others, another major challenge is the "not insignificant risk of the vaccine virus reverting to wild-type virulence," creating an opportunity for the vaccines to propagate disease rather than prevent it.

In fact, the world is already familiar with this phenomenon in the form of oral polio vaccines. Though not "intentionally designed that way," oral polio vaccines are considered "a little bit transmissible" and are acknowledged to cause polio.

Hopkins' researchers pointedly characterized the reversion challenge as "both a medical risk and a public perception risk." Another Catch-22 articulated in the university's report is that while reversion risks could perhaps be lessened by engineering the vaccines to be more "weakly transmissible," this could defeat the purpose of getting vaccines to "go" on their own.

On the other hand, the two scientists who are most strongly promoting transmissible vaccines argue that "even … where reversion is frequent, [their] performance will often substantially exceed that of conventional, directly administered vaccines."

These same authors have also developed models suggesting that starting the transmissible ball rolling with direct vaccination of newborns could be particularly impactful.

In September 2020, two researchers writing in the Bulletin of the Atomic Scientists agreed that self-spreading vaccines may have significant downsides and could "entail serious risks," particularly given that scientists lose control of their creation once released. They noted, "While it may turn out to be technically feasible to fight emerging infectious diseases … with self-spreading viruses, and while the benefits may be significant, how does one weigh those benefits against what may be even greater risks?" They outlined several additional questions:

On the latter point, the Bulletin authors drew readers' attention to immunocontraception efforts in animals as well as an infamous example of "weaponized biology" against humans in apartheid-era South Africa, called Project Coast, which sought -- reportedly unsuccessfully -- to develop an "infertility 'vaccine' to be used on black women without their knowledge."

Other scientists have made an even more direct case against transmissible vaccines, arguing the risks of autonomously spreading vaccines do, in fact, "far outweigh potential benefits." Risks, in their view, include "the unpredictability of mutations of the virus, the inability to safely test at a large scale and the grave potential threat to biosecurity."

When measles, rather than COVID, was dominating the headlines a couple years ago, the unvaccinated were heavily scapegoated for apparent outbreaks. This non-evidence-based finger-pointing (used to usher in draconian new vaccine mandates), ignored the well-documented "phenomenon of measles infection spread by MMR (live measles-mumps-rubella vaccine), which has been known about for decades" and has resulted in "detectable measles infection in the vast majority of those who receive it."

The experimental Pfizer and Moderna COVID vaccines use new messenger RNA (mRNA) technology rather than the traditional live-virus technology featured in vaccines like the MMR, and thus, we are told, they cannot produce the same type of "shedding."

Some of the people raising these questions have pointed to the September 2020 article in the Bulletin of the Atomic Scientists, subtitled, "What could possibly go wrong?" By May 2021, the Bulletin's editors, apparently uncomfortable with the attention the September article had attracted, were trying to distance themselves by stating the Bulletin's content was being misused to further conspiracy theories about "highly effective and safe COVID-19 vaccines."

Whether the COVID injections are "self-spreading" in any sense of the word is a question that cannot currently be answered. However, there is at least one plausible molecular mechanism that could explain the observed vaccinated-to-unvaccinated "shedding" effects.

GreenMedInfo's Sayer Ji explains that "horizontal information transfer within biological systems [is] mediated by extracellular vesicles, which include a virus-like phenomenon known as microvesicle shedding and/or exosome-mediated transfer of nucleic acids." Citing a 2017 peer-reviewed study on the "biology and biogenesis of shed microvesicles," Ji states:

"[I]t is possible that [mRNA vaccines] do, in fact, contribute to microvesicle shedding, which represents an even greater, more persistent threat than live-cell vaccine shedding when it comes to the persistent biological impact the vaccinated can have on the unvaccinated."

What is even more certain is that scientists themselves do not have all the answers. Some may wish to believe in the possibility of simply genetically engineering a vaccine "in ways that thwart its ability to evolve into something nasty." But others note "the inevitability of evolutionary change resulting from [transmissible vaccines'] ability to self-replicate and generate extended chains of transmission."

Techno-thriller author Michael Crichton predicted in 2002 that with the advent of nanotechnology and other technological innovations, the pace of evolutionary change was likely to be "extremely rapid." Crichton cautioned, "human beings have a poor record of addressing the hazards of new technologies as they arrive."