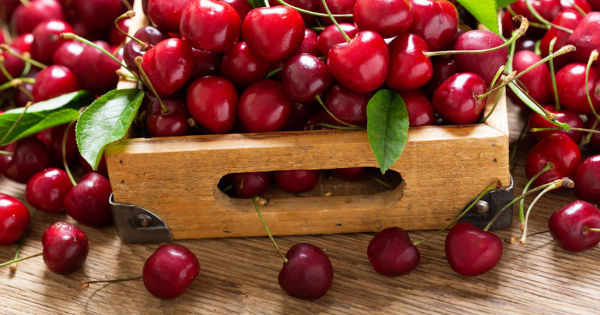 They satisfy a sweet tooth and are likely more sought-after than their tart counterparts. Sweet cherries, however, offer more than just taste and freshness.

Like the tart variety, sweet cherry is often used in dried, powder and juice forms, making for a flexible addition to a wealth of recipes. Cherries can also be eaten raw as a snack, added to fruit salads, turned into compote for breakfast bowls and puddings, or incorporated frozen into smoothies and blended drinks.

Their high antioxidant content is thought to help fight oxidative stress, which has been linked to chronic disease and premature aging.[ii] Cherries are particularly abundant in polyphenols, a family of plant chemicals that combat cellular damage and slash inflammation in the body.[iii]

In a 2006 study, Bing sweet cherries appeared to reduce inflammation in healthy subjects.[iv] Anthocyanins in cherry and mulberry, too, were found in separate research to alleviate oxidative stress and inflammation associated with obesity in animal models.[v]

Cherries, specifically the tart kind, previously been found to significantly reduce age-associated inflammation and promote protein or cellular homeostasis in the hippocampus, as well as improve working memory.[vii] They are therefore considered helpful in promoting healthy brain aging and delaying neurodegenerative disorders.

Cherries aid in active recovery after exercise because they are a reliable source of natural sugar. A carbohydrate-rich post-workout food such as cherries may help refuel glycogen stores as well as promote muscle repair.[viii]

Reported to be high in anti-inflammatory and antioxidative capacity, cherries and their components are thought to provide a similar but natural alternative to over-the-counter non-steroidal anti-inflammatory drugs (NSAIDs) or analgesics.[ix]

Connected to inflammation and oxidative stress as stress responses to exercise, evidence points to trends of decreased circulating C-reactive protein, a common inflammation marker, in healthy women after two servings, or 280 g each, of Bing sweet cherries.[x]

On a related note, in a study involving 20 active women, those who drank tart cherry juice twice daily for eight days recovered more quickly and experienced less muscle damage and soreness after their sprint exercises versus the placebo group.[xi]

Sweet cherries are a wonderful source of vitamin C and polyphenols, which both hold the key to healthy, youthful skin.

Vitamin C protects the skin from oxidative stress by donating electrons to neutralize free radicals.[xii] It is also essential in the synthesis of collagen.

Deemed "most dramatic and reproducible" of all of vitamin C's effects on skin health is wound healing, directly linked to collagen synthesis.[xiii] "[This] means that supplementation is useful, and both topical application and increased nutrient intake have been shown to be beneficial," wrote the authors of a 2017 study.

A 2019 study concluded that metabolic disorders were counteracted by consuming the fruit and leaves of sweet cherries.[xiv] The findings may help prevent and treat obesity-related metabolic disorders, such as cardiovascular disease.

In other research, five varieties of sweet cherries from Portugal's Fundão region were found to contain bioactive compounds that may help prevent diabetes, heart disease and cancer, to name a few.[xv] In the study, the sweet cherry varieties had antidiabetic potential and an ability to protect human erythrocytes from oxidative damage.

Their anti-inflammatory action enables sweet cherries to ease the painful symptoms of arthritis, particularly gout, characterized by a buildup of uric acid and marked by joint inflammation, swelling and pain.

Sweet cherries are a natural source of melatonin, an antioxidant that is widely linked to sleep regulation.[xviii]

Studies highlighted sweet and tart cherries' ability to improve both quality and quantity of sleep, with the effect easily detected within three days of consuming sweet cherries in 141-gram quantities (about 25 pieces). Those who consumed the fruit also reported reduced urinary cortisol and anxiety along with improved mood.

Look deeper into the types and benefits of cherries through scientific studies on the GreenMedInfo.com database. 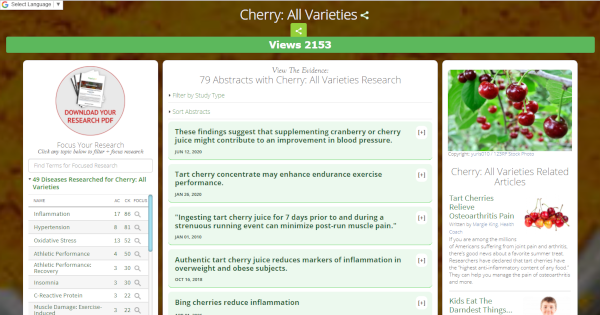