Should A Woman Having Twins Have A Home Birth Or Hospital Birth? 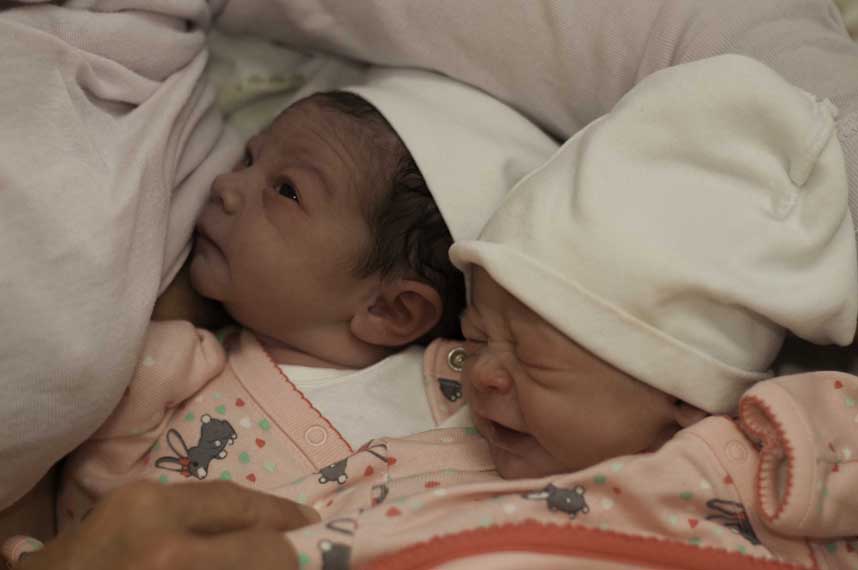 When twins are diagnosed before labor, both twins are head down and full term and delivered within 15 minutes of each other, attended home birth is as safe as hospital birth.

Knowing before labor that if you are carrying twins and whether the twins are in the same sac and whether twin A is vertex or breech can prevent the death of about 5% of twins around the time of birth, while 95% survive without this screening. The use of cesarean where indicated and delivering the second twin within 15 minutes of the first at vaginal twin birth prevents most perinatal mortality and morbidity. In order for a woman to base her decision for where and when to give birth based on expected survival rates, she would need to undergo an ultrasound at 36 weeks determining if she is having twins, if twin A is breech and whether the twins are in the same sac. 50% of twins at term are both vertex, 40% have one breech, and 8% both are breech.

Gestational age of twins is the primary predictor of perinatal morbidity/mortality, with perinatal mortality lowest at 38 weeks. Just as singleton stillbirth rates increase from 1/1000 to 2/1000 after 42 weeks, the rate of unexplained stillbirths increase in twins increases after 37 weeks with rates of about 1/200 (0.5%) every week after that (Algert et. al. 2009) However in most cases, cesarean at or before 38 weeks does not improve outcomes over expectant management. (Dias and Akolekar, 2013)

When 30 minutes or more passes between the births of the twins, 25% of second twins have a pH of 7 or less. The outcomes of infants born with a pH of 7 or less is improved by neonatologist care in hospital. For those born in hospital with pH of 7 or less, long term morbidity occurs only in babies with additional problems. (Hafström et.al. 2012) There is no research on the long term outcomes of babies born with low pH at home. A second reason to expedite the delivery of the second twin is that after the birth of the first the cervix closes up in about 10 minutes. If the woman does not know she is having twins, no effort will be made to deliver the second twin expediently. The increased death and morbidity for Twin B due to placental separation is eliminated if Twin B is delivered within 15 minutes of Twin A. (Schmitz et. al. 2008)

How to Deliver? Cesarean or Vaginal?

At term, the overall death rate for low risk singleton births at home or in hospital is the same as for term twin births in hospital when both twins are head down in hospital: slightly less than 1/1000. (Rossi 2011)

However, when the first twin is breech, footling, frank or complete and the birth is a planned vaginal birth, the death rate ranges from 3/1000 (0.3%) – 10/1000 (1%). These deaths often involve cord prolapse (10/1000) and locked twins (2/1000). Twins have an increased risk of cord prolapse where breech, hydramnios, and preterm delivery complicate the birth.(Kahana et.al. 2004) When the first twin is frank breech, survival rates of attempted vaginal births are 99% under conditions in which 50% underwent emergency cesarean rates during labor (Sentilhes et. al. 2007)

At term, cesarean improves outcomes of locked twins. Locked twins occurs when the first twin is breech and the second is vertex. The incidence of locked twins in is about 1:500 twin pregnancies and about 1:68 with growth retarded twins in breech-vertex position (Haest et. al. 2005)

Where to Deliver? Home or Hospital?

At planned attended homebirths in Oregon in 2012, 2 twins died among 13 sets of twins (2/26) among a total of 1,249 births or 7.7% of twins died at birth according to this Oregon Birth Outcomes, by Planned Birth Place and Attendant report.

Ina May Gaskin reports in Ina May's Guide to Childbirth (2003) on 2000 home births, with 8 perinatal deaths, including 15 sets of twins, but does not specifically report if any of the deaths involved the twin births.

Why Would a Woman Choose a Twin Homebirth?

The above information provides women with the opportunity to make informed choices and can be used by midwives to provide women with statistics. Women choose to have twins at home for many reasons. A big reason why women "choose" home birth for twins is because it is the only way they can access support for non-surgical birth. It is not uncommon for doctors and/or hospitals to refuse to support vaginal twin birth A homebirth midwife is sometimes the only practitioner with the skills to safely deliver twins vaginally.

The evidence shows that where the babies are both head down, and the pregnancy straightforward, and the twins delivered within 15 minutes of each other, there is no increased risk to the twins to be born at home. Breech birth risks can be decreased by delivering into hot water.

Among 758 sets of twins in France where Twin A was head down and > 35 weeks no deaths were documented with a 34% cesarean rate. (Schmitz 2008). Vaginal delivery was proposed to 657 women with first twin vertex including monoamniotic twins as long as they had clinically normal pelvis without past history of cesarean, the second twin was not 25% larger than the first twin, and umbilical artery blood flows and fetal heart rates were normal.

Elective cesarean was only done in cases of previous cesarean, placenta previa, IUGR, twin to twin transfusion and preeclampsia. In the vaginal delivery group more babies had an apgar <4 or apgar <7 at 5 minutes, but the difference was not significant. The planned vaginal births had less transfusions and less hysterectomies. This study shows that with careful selection for vaginal twin birth and expedient management, perinatal death of twins can be avoided. The authors are strongly opposed to routine cesarean for twins and conclude that for select patients with first twin presenting head first, planned vaginal delivery in hospital remains a safe option where active management of the second twin is routine.

Once the decision is made to have a twin homebirth, the midwife needs to bring 2 cord cutting sets and extra receiving blankets. One possible way to remember which twin delivered first is to have one clamp pre-marked with red indelible ink and use it to clamp the cord of Twin A. If the second twin is breech, outcomes are better delivering it breech than to attempt to turn it. Breech birth outcomes are vastly improved by delivering breech into hot water because the cord continues to pulse in hot water as if it were still inside the womb for the minute until the head is delivered.