Views 4705
Posted on:
Saturday, October 27th 2018 at 4:45 am
Written By:
GreenMedInfo Research Group
This article is copyrighted by GreenMedInfo LLC, 2020
Visit our Re-post guidelines

Treatments for sufferers of schizophrenia have not advanced significantly in the last fifty years. But there is new cause for hope in the form of a plant-based treatment that can reset the brains of psychosis sufferers back to normal levels in a single dose

Individuals suffering with conditions like schizophrenia show distinct symptoms in functional brain scans. But what causes episodes like psychosis, and are existing treatments meeting the needs of the affected?

Psychosis is not a diagnosis, but a mental state characterized by breaks with reality, causing deranged thought processes, delusions, and even hallucinations.[1] A person in a state of psychosis may hear voices, see things that are not there, and have difficulty distinguishing between what is real and unreal. These episodes, called psychotic breaks, can be severe and deranging for the patient, as well as disconcerting for individuals with whom the patient comes into contact. Despite this, most sufferers of psychosis are not violent or dangerous.[2]

Other effects of psychosis include depression, anxiety, and social withdrawal. Sufferers can experience an impaired ability to communicate, creating difficulty in leading a functional life. Psychosis can be brought on by schizophrenia, or by alcohol and drug use, including prescription drugs. A person may experience episodic psychosis, induced by postpartum depression or a bipolar manic episode. Environmental and life stressors often play a role in psychosis, and researchers believe that a genetic predisposition related to low levels of dopamine in the brain may also be a factor.[3] A growing body of evidence suggests that nutrient deficiencies and even food allergies may be at the root of symptoms, however food and lifestyle-based remedies are not often viewed as legitimate in our age of chemical-dependency.

To date, medical science has produced no definitive findings on what causes psychosis, hindering research into successful treatments. Increasing scientific exploration into the medicinal benefits of cannabis, also known as medical marijuana, have yielded effective treatments for other types of brain disorders, including seizures, anxiety, Parkinson's, and Alzheimer's disease. These encouraging results led researchers to look at cannabis as an potential ally in the treatment of psychosis.

The National Alliance on Mental Illness (NAMI) estimates that around 2 million people in the United States are afflicted with schizophrenia.[4] Other causes contribute to an even greater number of people affected by psychosis. NAMI asserts that the "key to managing schizophrenia starts with finding the right medications."[5] The current standard of care is to prescribe antipsychotics, a class of pharmaceutical drugs that have extreme tranquilizing effects. Sadly, these neuroleptic drugs are also associated with major long-term side effects, including brain tissue shrinkage[6] and significant structural brain damage.[7]

In light of this grim prognosis, a plant-based treatment modality with zero-known serious effects would be a significant breakthrough. Enter the landmark study, published in a peer-reviewed medical journal, which illustrates how a single dose of cannabidiol, or CBD, can provide immediate relief for sufferers of psychosis.

In the September 2018 edition of JAMA Psychiatry,[8] authors of the study from King's College in London, reported on how cannabidiol, one of the active compounds in the cannabis plant, was shown to quickly and significantly reset brains inclined towards psychosis back to normal states. Researchers conducted a double-blind study of thirty-three people at high risk of psychosis who had not previously been prescribed antipsychotic medication. Nineteen healthy subjects served as controls. Six participants in the high-risk group received a single oral dose of 600 mg of CBD daily, while seventeen participants in the high-risk group received a placebo. Control participants were given neither substance. All participants were studied periodically over the course of 40 months by receiving a functional magnetic resonance imaging scan, or fMRI, while performing a verbal learning task.

The primary measures of the study were levels of brain activation during verbal encoding and recall, as evidenced by increased blood oxygen flow to specific regions of the brain. Before treatment, the brains of the high-risk group were identified as functionally different from healthy brains, displaying abnormally elevated activity in the caudate region (shown in red/yellow), a part of the midbrain associated with a clinical risk of psychosis. Researchers found that a single, large dose of CBD quickly reset brain activity in the caudate region back to normal levels. 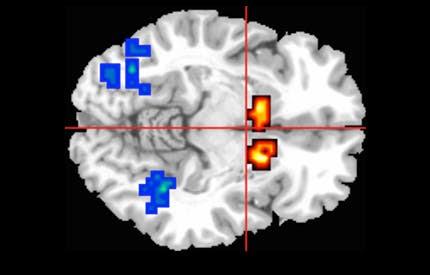 Dr. Sagnik Bhattacharyya, one of the authors of the study, noted how traditional psychoses medications, developed in the 1950s, do not meet the needs of most patients today. "Our results have started unravelling the brain mechanisms of a new drug that works in a completely different way to traditional antipsychotics."[9]

The cannabis plant has 400+ known chemical entities, more than 60 of which are active cannabinoid compounds. Of the active compounds, the two most widely known and researched cannabinoids are THC, or Delta-9-tetrahydrocannabinol, and CBD, or Cannabidiol. When ingested, these cannabinoids act on endogenous receptors in cells, altering neurotransmitter activity in the brain.[10] CBD has proven useful in other medical trials by helping improve symptoms of schizophrenia, improving REM sleep, and helping to ease anxiety.

Although THC has previously been linked to the development of psychosis in some people,[11] it now appears that CBD, isolated and delivered in high doses, may actually help treat it. Unlike THC, the dominant compound in the (still) federally illegal drug, CBD is non-psychoactive--meaning, it will not get you high. But CBD does have a powerful therapeutic effect on the brain. CBD is currently being used to successfully treat a growing array of disorders, many of which originate in the brain. But there is much to be learned about its relationship to psychosis.

CBD appears to have an opposing effect to THC in the brain, which coincides with a natural balancing act between the two chemicals in the plant. Strains of marijuana that have higher levels of THC tend to have lower levels of CBD, and vice versa (although genetic engineering of medical cannabis strains are creating exceptions to nature's rules). The growing emphasis on cannabis as medicine has led to extractions of pure CBD being available for therapeutic use, representing an unprecedented breakthrough in natural treatment options for sufferers of brain disorders. As opposed to the potential for brain-devastation caused by pharmaceutical drugs, CBD is a natural antipsychotic with surprisingly few negative side effects.[12] This is an important factor in patient compliance with medication protocols, since refusal to adhere to a dosing schedule is one of the greatest threats to effective psychosis treatment.

Due to the non-psychoactive nature of CBD, this treatment option has a low-risk of abuse and is generally well-tolerated, making it "an ideal treatment" according to Dr. Bhattacharyya. He and his colleagues are doubling down on their efforts to cement CBD as a new treatment standard for psychosis, thanks in part to a 2-million-dollar research grant, awarded due to the success of this study. They will soon be launching the first large-scale, multi-center trial using CBD to treat high-risk young adults in the UK, underscoring the "urgent need for a safe treatment for young people at risk of psychosis."[13]

The National Alliance on Mental Illness emphasizes the importance of early treatment in stopping and potentially reversing the effects of psychosis. The key to early treatment is recognition. Signs that you or someone you know may be at risk for developing psychosis include:

If you or someone you know is experiencing one or more of these symptoms, do not ignore or dismiss the warning signs. The National Alliance on Mental Health has a hotline to help you find help in a crisis: 1-800-950-NAMI (6264) or info@nami.org.

To find out more about the exciting potential of CBD as a treatment option, explore nearly 600 abstracts on cannabis from GreenMedInfo's research database. Alsoase., find out more information about natural and integrative approaches to schizophrenia on the GMI database.