A Special Report on Standing Rock: The Environmental and Social Justice Consequences of the Dakota Access Pipeline 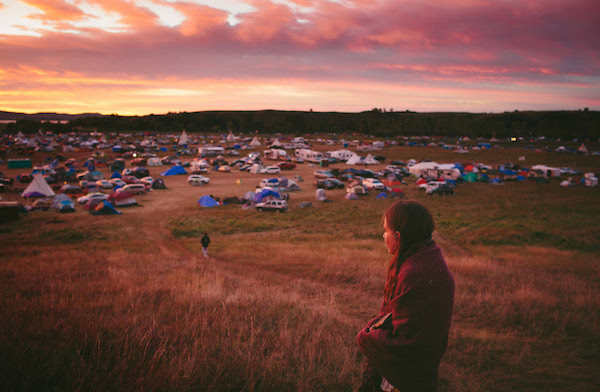 In May of 2016, a multi-billion dollar corporation, Energy Transfer Partners, began construction on the Dakota Access Pipeline (DAPL) project, despite long standing opposition from the Standing Rock Sioux Tribe of North and South Dakota. The DAPL, also known as the Bakken Oil Pipeline, is designed to extend 1,168 miles across North Dakota, South Dakota, Iowa, and Illinois, crossing through communities, farms, tribal lands, sensitive natural areas and wildlife habitat. It is intended to carry crude oil from the Bakken oil fields in North Dakota to Illinois where it will link with another pipeline that will transport the oil to terminals and refineries along the Gulf of Mexico. [2]

If construction is completed, the pipeline is expected to carry approximately 500,000 barrels of crude oil daily from North Dakota to Illinois, crossing underneath Lake Oahe and the Missouri River a half-mile upstream from the Standing Rock Sioux Tribe's reservation.  [3] The Missouri River is the main source of drinking and irrigation water for the 8,200 residents of the Standing Rock reservation.  The pipeline would pump an estimated 17,000 gallons of oil per minute underneath this water source, which would be devastated by a spill or leak. [4] This project poses serious environmental threats and will disturb burial grounds and sacred sites on the Tribe's ancestral Treaty lands. [5] On July 26, 2016 the U.S. Army Corps of Engineers gave its approval to run the DAPL underneath Lake Oahe, in violation of federal law. One day later, on July 27th, the Standing Rock Sioux Tribe filed a complaint in federal court seeking an injunction to halt construction. [6] The Tribe's legal action has been followed by a rapidly growing movement of peaceful support.  A timeline and collection of articles chronicling events is available here. 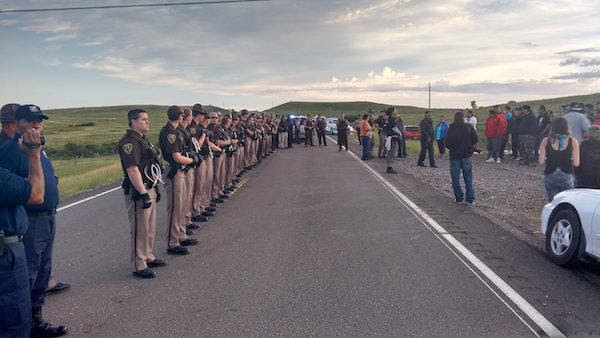 A Sacred Movement For the Future

"We have seen the power of tribes coming together in unity and prayer and we will continue to pray for the protection of water, mother earth and her creation, as well as all past and future generations. " - Standing Rock Sioux Chairman Dave Archambault, II

There are now thousands of people camped out at Standing Rock, including international supporters and representatives from hundreds of Indigenous tribes across the North American continent.  These water protectors are engaging in daily peaceful, prayerful, non-violent actions to stop construction.  Prayer, diverse Indigenous spiritual practices, and a duty to protect sacred sites and natural resources are central to this movement. In return, their efforts are being met with force and violence at the hands of private security and law enforcement entities guarding the pipeline.  [7]  In one incident on September 3rd, DAPL construction workers plowed through a piece of Tribal land, destroying sacred sites and burial grounds. [8] Water protectors who attempted to stop the bulldozers were confronted by private security forces who deployed pepper spray and attack dogs. Following news reports of the incident, the  journalist who covered the story and filmed the attacks was charged with trespassing and rioting by North Dakota authorities. [9]

The repression effort is becoming increasingly more militarized and there have been hundreds arrests, injuries, dog attacks, pepper spray, strip searches, and other violations of civil rights. On October 23rd the Morton County Sheriff's office announced plans to escalate their response by calling in additional police forces from six states to confront the Standing Rock water protectors. [10]

"To many people, the military tactics being used in North Dakota are reminiscent of the tactics used against protesters during the civil rights movement some 50 years ago. And I believe that there are similarities there. But to us, there is an additional collective memory that comes to mind. This country has a long and sad history of using military force against indigenous people—including the Sioux Nation."

On October 27th, as this article was being written, several hundred officers in riot gear surrounded and moved in on one of the Standing Rock camps, firing rubber bullets, bean bags, tasers, and pepper spray, with support from helicopters, military Humvees, ATV's, and a sound canon. Over 100 people were arrested. Several live streamed videos were recorded and are available here: Video 1, Video 2

The Standing Rock Sioux Tribe is now calling upon the federal Department of Justice to intervene on behalf of their rights to freedom of speech and religion, and to investigate civil rights violations by state and local law enforcement agencies. [11]

Who is Behind the Pipeline?

"This is another chapter in the long history of the federal government granting the construction of potentially hazardous projects near or through tribal lands, waters, and cultural places without including the tribe." - Standing Rock Sioux Chairman Dave Archambault, II

The business entity responsible for the DAPL — Energy Transfer Partners,  — is owned by Energy Transfer Equity (ETE), a multi-billion dollar enterprise that has enjoyed skyrocketing profits this year as natural gas prices rose. During one week in April, the CEO of ETE, Kelcy Warren, personally gained $430 million from his 18% stake in the company when share prices rose 32%, bringing his personal net worth to $2.4 billion dollars.   [12]

The proposed pipeline route will cut through 50 counties in 4 states. As the general site plan illustrates, this massive pipeline is passing through a corridor of numerous cities, towns, and reservations. The outcome of the Standing Rock resistance will have a great impact not only on Native American citizens and the Standing Rock Sioux Tribe, but on all communities located along the 1,168 mile corridor. [13] 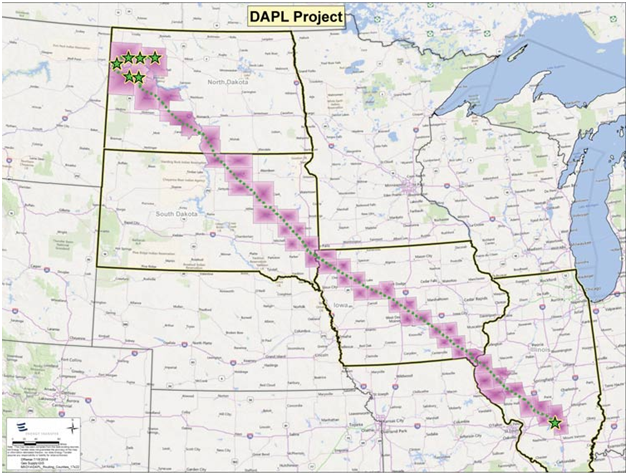 Oil and wastewater spills from pipeline leaks are now tragically common in North Dakota. More than 18 million gallons of oil and toxic wastewater were spilled from 2006-2014, steadily increasing in the years after the boom. [16]

Fracking operations foul the water supplies in a number of ways. The water table can be irreparably damaged by the hydro-fracking itself, which is a separate issue from contamination from pipeline leaks in that. Likewise, the groundwater can be tainted very quickly and profoundly by the disposal of fracking wastewater.

The fracking process involves drilling wells thousands of feet deep into the earth, past aquifers, to reach rock formations, and forcing them to release oil and gas. Once the well is drilled and encased, three to five million gallons of water mixed with chemicals and sand are pumped at extreme pressure into the well, which shatters the rock, creating multiple fractures. The sand and chemicals seep into the cracks and hold them open to release oil and gas which is pumped to the surface. This process poses a high risk of ground water contamination. Once the fracking injection fluids enter a natural aquifer or water course, the damage is extremely difficult to reverse. [17]

As part of the fracking process, some of the fracking injection fluid returns to the surface of the earth, mixing with groundwater to produce a toxic wastewater by-product.  Drilling companies then dispose of this contaminated wastewater by injecting it back into the earth via wastewater disposal wells.  This procedure has caused earthquakes in fracking regions all across the country.

Earlier this year, in Oklahoma, state regulators shut down more than 30 fracking wastewater disposal  wells following a 5.6 magnum earthquake that was felt across 5 states. [18] 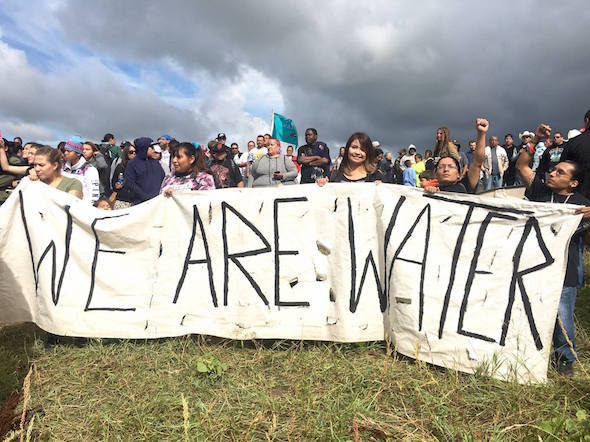 GreenMedInfo Research and Declaration of Support

The resistance at Standing Rock is part of a global call to challenge the oil and gas industry and the damages it has inflicted upon our planet.  Wars are waged for control over oil resources. Nations have seen vast swaths of countryside irreparably laid to waste by oil drilling rigs.  Bodies of water across the world have been sullied by tar balls and oil spills in the water. Unsuspecting communities have seen their water supplies irreversibly contaminated by hydro-fracking the land.

GreenMedInfo stands with these water protectors as they fight for the rights of us all. 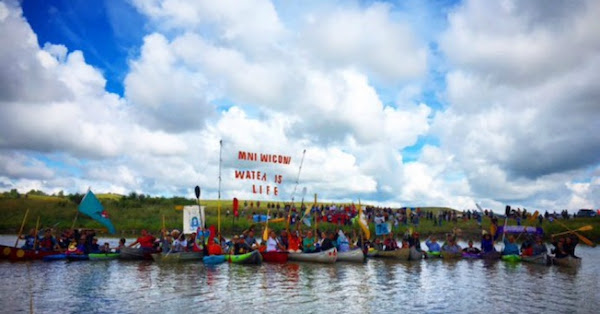 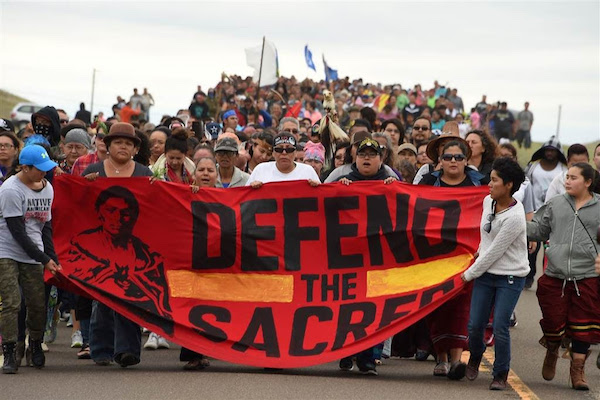 Resources for News and Updates

While most major news outlets have failed to adequately report these developments, there are other good sources for up-to-date information.  We urge our readers to stay informed and bear witness with the following resources:

The Bank of Tokyo-Mitsubishi UFJ