The Story of Salt 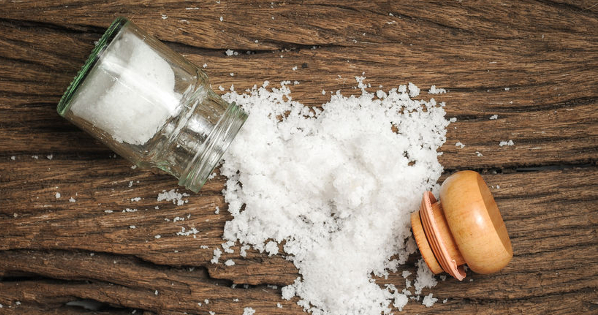 "Salt should be considered the relic and the symbol of the ocean where life started, the ocean that is still present in our bodies." (De Santo NG et al 1997)

Salt makes up around 90% of the ocean's minerals--the same percentage found in our blood. Essentially, our blood reflects the composition of the ancient ocean from where life began. That fact alone should varnish salt with the utmost respect.

And salt is everywhere. "What a funny planet (the earth). It is ugly, dry, full of sharp points, and is all salty," said Antoine Jean-Baptiste Marie Roger de Saint-Exupery.

The ocean encompasses over 70% of the Earth's surface and 99% of the Earth's living space. Salt is in rainwater (especially within 200 kilometers from the ocean), it's in the ground (clay and soil), it's in mountains (rock salt), it's in animals (blood, interstitial fluid, skin, bone marrow, organs, meat, insects, etc.), it's in plants (tiger nuts, the pith of certain tree trunks, aquatic vegetation, etc.) and it even comes out of animals (urine). Salt is even found in areas far away from oceans (salt licks, brine springs, etc.).

It's commonly thought that humans evolved eating a low-salt diet. But when you look at all the places where salt can be found, you begin to wonder how this is really possible. In fact, as I discuss in my new book, The Salt Fix, we may have evolved eating a high-salt diet.

And humans have always had a yen for salt. It has been documented that, "Some populations satisfied their need for salt by cannibalism, others by drinking milk (e.g. the Kirgises and Numidians), others by drinking from saline sources (e.g. Arabian Bedouins, "Desert Dwellers") or by drinking animal blood and animal urine (e.g. the Massai in East Africa)." (Ritz E 1996) We used to burn saliferous herbs, dry and burn seaweed, and burn plants or wood in pots to obtain plant ash—all in order to extract consumable salt.

Salt mines, salt lakes, brine springs, evaporated sea water (in lagoons and man-made pools), and salt rocks: Our ancestors have sought out all these sources for salt. Salt bricks have been used in the construction of buildings in certain areas of Arabia (Gerra) and Northern Africa (Teghaza, the so-called 'city of salt' in the Sahara). In ancient Egypt, salt was thought to prolong life. In Scotland, salt was the symbol of the immortal spirit. And, "Salt was regarded as the essence of living things and life, and as the very soul itself. Nothing could be eaten without salt and to be without salt was to lack an essential element." (Cirillo M et al 1994).

The truth is, compared to our past, the average intake of salt per person per day of around 8 to 9 grams (or about 3,200 to 3,600 milligrams of sodium) is not that high. Compare that to the ancient Romans, who were estimated to have consumed around 25 grams of salt per day, which is around three times higher than the amount of salt we eat today. In 1725, in France, where very detailed records were kept regarding salt revenue due to heavy taxation, the daily salt intake was between 13 and 15 grams per day. According to J. Waser, salt intake in Baden, Switzerland use to be around 15.5 grams per day. In Zurich, Switzerland the daily consumption of salt was over 23 grams per day.

And salt intakes were much higher in Scandinavian countries in the 16th century. Indeed, Danes consumed up to 50 grams of salt per person per day, and the consumption of salt in Sweden in the 1500s approached 100 grams, mainly from salted fish and cured meat. Basically, the amount of salt we are eating today is paltry compared to just a few hundred years ago.

And salt has been revered, an object on par with gold, throughout history.

Salt was a main item of commerce in Venetian since the 6th century and was even used as money in Rome, Africa, Borneo and China. While exploring the West African coast in 1455, Venetian Ca de Mosto noted that at certain times of the year when the heat was so oppressive the natives would, "…die without salt." Valentin Fernandez exploring Senegal in 1506 noted that, "The chiefs trade more gold for salt than for anything else. They need salt for their cattle and for themselves. They state that without salt neither they nor their cattle will survive and prosper." And it has been documented that the natives in Sierra Leone and in Central Africa will give their wives and children away for salt. Even cannibalism has been attributed to the need to satisfy the salt appetite.

There is an innate appetite for salt. Cirillo et al noted that Indians are predominantly vegetarians depending more on added sodium to avoid deficiency. And the importance of seeking out and obtaining salt is highlighted by the fact that we have an innate appetite for salt and that salt is a primary taste. In vertebrates, the existence of a hunger for salt indicates that it serves more than simply gratifying our palate.

There are also many useful functions of salt. In ancient times salt and/or saline solutions were used for treating bruises, osteoarthropathies, swelling, infections (sweating, vomiting, and diarrhea) and as an antiseptic agent. Pliny (AD 23 to AD 79) an ancient Roman author and philosopher noted additional benefits of salt: "…the teeth do not undergo any erosion nor suffer decay if every morning before breakfast some salt is kept under the tongue until it dissolves." In De Re Coquinaria, Apicius noted the benefits of salt in the following, "…seasoned salts ease digestion, and help loosen the stomach and prevent illness from fonning, as well as pestilences and every other type of fever."

Let us not forget the role that salt has served in our evolution and throughout history. Salt is an essential mineral that we need to live. Without sodium you wouldn't have nerve impulses, the heart wouldn't be able to beat, and you wouldn't be able to move. Salt is essential for almost all life, but especially humans, because we regulate temperature by sweating out salt and water. And, as I show in my book, The Salt Fix, we are best served by listening to our salt cravings, not be adhering to a low-salt diet. Our body is based on salt and it is constantly trying to maintain our internal sea by signaling our salt hunger. Salt hunger has served all life for over 100 million years. It's time we started listening to it.