A study from West Africa's Guinea-Bissau discovered that all-cause infant mortality more than doubled after the introduction of the DTP vaccination.

An observational study from the West African country Guinea-Bissau titled, "The Introduction of Diphtheria-Tetanus-Pertussis and Oral Polio Vaccine Among Young Infants in an Urban African Community: A Natural Experiment," [i] examined the introduction of diphtheria-tetanus-pertussis (DTP) and oral polio vaccine (OPV) in an urban community in Guinea-Bissau in the early 1980s. The World Health Organization introduced the Expanded Program on Immunization (EPI) in low-income countries in the 1970s with the goal of universal immunization for all children. In the introduction, the study’s authors state, “Except for the measles vaccines, surprisingly few studies examined the introduction of vaccines and their impact on child survival.”

The purpose of the study was to examine what happens to child survival when DTP and OPV were introduced in low-income countries. A community study [ii] of the state of nutrition and family structure found that severe malnutrition was not evident in urban Guinea-Bissau although it was initially assumed to be the main cause of the under-five mortality rate.

The study findings emerged from a child population that had been followed with 3-monthly nutritional weighing sessions since 1978. From June 1981 DTP and OPV were offered from 3 months of age at these sessions. Due to the 3-monthly intervals between sessions, the children were allocated by birthday in a ‘natural experiment’ to receive vaccinations early or late between 3 and 5 months of age. The study included children who were greater than 6 months of age when vaccinations started and children born until the end of December 1983. The researchers compared mortality between 3 and 5 months of age of DTP-vaccinated and not-yet-DTP- vaccinated children in Cox proportional hazard models.

When mortality was compared, the mortality hazard ratio (HR) among 3-5-month-old children having received the DTP (±OPV) was 5.00 compared with not-yet-DTP-vaccinated children [i.e. a 400% increase]. According to the authors, differences in background factors did not explain the effect. All-cause infant mortality after 3 months of age increased after the introduction of these vaccines (2.12 (1.07–4.19)) [i.e. a 212% increase]. However, the study findings revealed the negative effect was particularly strong for children who had received DTP-only and no OPV (10.0 (2.61–38.6)).

“DTP was associated with increased mortality; OPV may modify the effect of DTP.”

It appears this early Guinea-Bissau study foreshadowed a line of documented injury and mortality caused by the DPT. A 2000 BMJ article found that a population of vaccinated infants, also from Guinea-Bissau, receiving one dose of DTP or polio vaccines had higher mortality than children who had received none of these vaccines. A 2004 observational study showed a doubling of the mortality rate of infants vaccinated with the single dose of DPT vaccine and increasing mortality rates after the second and third doses.[iii] A 2011 study of Guinea-Bissau females found DTP vaccine administered simultaneously with measles vaccine is also associated with increased morbidity and poor growth in girls.[iv]

In the United States, the DTP vaccine received major public spotlight and pushback after the 1985 book DPT: A Shot in the Dark was published tracing its development and describing its risks. Recently complied reports show settlements of injury and deaths from the TDap, DTP, and DPT vaccines within the United States Vaccine Court jumped 75% from $5.5 million in 2014 to $9.8 million in 2015. 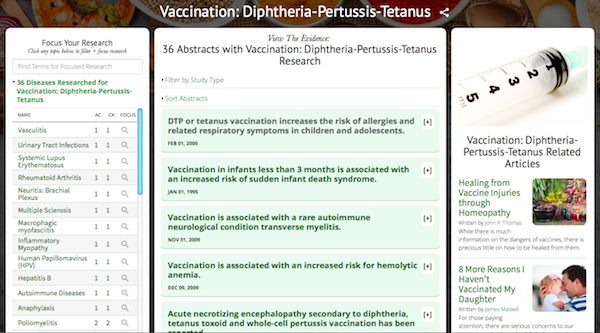 For additional research on the Diphtheria-Pertussis-Tetanus vaccine, visit the GreenMedInfo.com Research Dashboard.